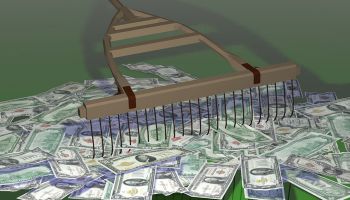 Investment bankers negotiate any number of aspects of M&A transactions. Their own fees are often on that list.

Fees generally are based on comparable advisory data. However, for some less-common deals, such as large transactions, few data points exist. In those situations, other factors, including history with the client or who suggested the deal, can have a greater influence on fees. While advisers are ultimately at the mercy of what the client wants to pay, bank and thrift investment bankers—none of whom wanted to be quoted for attribution because of the sensitive nature of the topic—said that if they can make a good case as to why they are requesting the fee, clients will likely agree.

Regardless of how much haggling takes place, it is common for i-banks to generate handsome sums on large deals. In fact, the most recent U.S. bank deals with price tags greater than $1 billion are expected to generate at closing some of the sector's biggest buy-side financial adviser fees reported in years.

How fees for some recent deals stack up

J.P. Morgan Securities LLC is set to receive $11.3 million for its buy-side role in Umpqua Holdings Corp.'s $2 billion combination with Sterling Financial Corp., a deal announced in September 2013. That fee will mark the largest reported buy-side advisory fee on a U.S. bank or thrift acquisition since Goldman Sachs & Co. received $35 million for its role on the $16.86 billion merger announced in December 2006 that created Bank of New York Mellon Corp., according to SNL data.

Jefferies LLC and Castle Creek Financial LLC are set to receive $9 million each for advising PacWest Bancorp in its $2.38 billion acquisition of CapitalSource Inc. The combined payout will stand as the largest reported combined fee to buy-side deal advisers on a U.S. bank or thrift acquisition since Citigroup Global Markets Inc. and J.P. Morgan received a total of $20 million on PNC Financial Services Group Inc.'s $5.6 billion acquisition of National City Corp., announced in October 2008.

Sometimes, such as in the PacWest-CapitalSource deal, companies will engage multiple advisers but only disclose fee information for some of them. PacWest used three advisers but did not disclose the fee paid to one, Goldman Sachs. For its other two advisers, Castle Creek and Jefferies, PacWest not only provided the advisory fees in SEC filings but also provided some detail about the fees and its relationships with the advisers.

PacWest notes in a Form S-4 filed Nov. 20, 2013, that its chairman, John Eggemeyer III, is also CEO of Castle Creek, and that the firms have a previously disclosed financial advisory engagement. Eggemeyer did not respond to a request for comment, but terms of the financial advisory engagement state that on PacWest acquisitions with a value greater than $20 million, Castle Creek receives a fee of $200,000 plus 0.65% of the amount of the deal value in excess of $20 million.

Based on that formula, Castle Creek should have received more than $15 million in fees from the CapitalSource deal, but the parties agreed to reduce the fee to $9 million, according to the filing. PacWest also notes in the filing that Castle Creek helped structure the financial aspects of the transaction and provided financial modeling and statistical analysis work. However, Jefferies, which also did not respond to a request for comment, was the lead investment bank for PacWest on the transaction, and that i-bank made a recommendation for its fee, according to the filing.

Jefferies also provided a fairness opinion and was involved early in the deal process. The i-bank met with PacWest's board to discuss potential opportunities—including a possible acquisition of CapitalSource—in March 2013, roughly four months before the deal was announced. 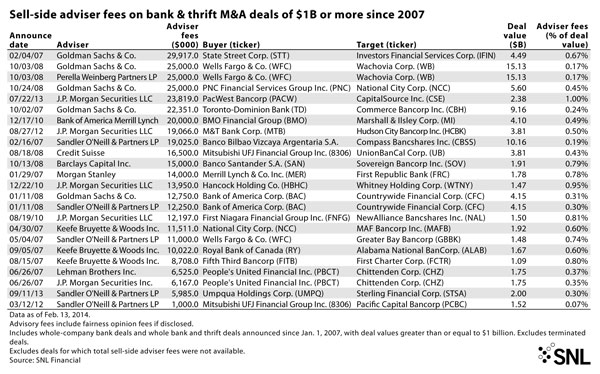 Investment bankers said they usually have more leverage to request higher fees when they are involved early, handle the negotiations from the start, or bring the idea to the client. Sometimes advisers are brought in later in the process and might receive a lower fee because they were hired to perform a specific task, such as an analysis or fairness opinion. For instance, Evercore Partners Inc., which did not respond to a request for comment, agreed to receive $500,000 for providing a fairness opinion to M&T Bank Corp. on its pending $3.8 billion acquisition of Hudson City Bancorp Inc.

Sandler O'Neill's fee as a percentage of the announced deal value in the Umpqua-Sterling transaction is less than most of the reported sell-side fees on U.S. bank or thrift acquisitions with a value of at least $1 billion since 2007. SNL data show the majority of sell-side advisers on those deals received fees ranging from about 0.35% to 0.81% of the announced deal value.

Up factors, down factors

However, Sandler has a history and even a future with advising deals involving Sterling. For instance, Sandler O'Neill received an $11 million advisory fee on Sterling's recapitalization, and the investment bank will receive fees for an engagement to handle branch divestitures of the combined Umpqua-Sterling subsequent to the merger, according to a Form S-4 filed Jan. 17 with the SEC.

Investment bankers said history with clients can influence the fees advisers receive. If an adviser works on more than one deal for the same client that lead to multiple substantial fee payments, investment bankers might eventually find themselves receiving a below-market fee on a transaction.

I-bankers said clients that believe they can execute a transaction with little assistance from an adviser also may want to pay reduced fees. This can occur with clients that have developed an internal capability to examine deals—such as private equity firms or serial acquirers that have built up their corporate development departments.

An investment bank might also receive a low advisory fee if the target attracts many bids that establish its sale price without much solicitation from the adviser. I-banks also might face lower fees if the buyer and seller have a history together and came up with the idea to merge before engaging an adviser.

Of course, there are scenarios in which investment banks can earn higher-than-normal fees.

For instance, if a long-time client does not execute a deal, investment bankers said they can find themselves generating only nominal fees for years of work through board presentations or statistical analysis reviews. If the relationship eventually culminates in an M&A transaction, it can give the client an opportunity to pay the i-bank an above-market fee, compensating the adviser for the work not only on the transaction but also its past assistance.

J.P. Morgan earned the highest sell-side fee as a percentage of deal value—1% for its role in advising CapitalSource on the pending sale to PacWest—on a U.S. bank or thrift acquisition with a price tag of at least $1 billion since 2007. A spokesperson for J.P. Morgan said the company does not comment on deal fees, but J.P. Morgan has been a regular on big bank deals.

The investment bank has advised on 13 of the 25 deals since 2007 in the sector valued at least $1 billion. J.P. Morgan's activity in the space certainly enhances its brand reputation, another factor advisers can tout when negotiating fees.