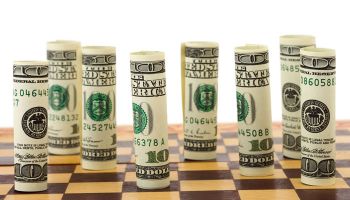 As long-term interest rates have risen and erased many gains in bond portfolios, banks have maintained large balances of excess liquidity on their balance sheets.

Long-term interest rates rose off historical lows in 2013, beginning in the spring, and continued to move higher to close the year at levels not seen since the summer of 2011.

Banks saw unrealized gains in their investment portfolios wash away as the yield on the 10-year Treasury rose more than 125 basis points in 2013, closing the year at 3.04%, compared to 1.78% at the end of 2012. The sizable uptick in long-term rates during 2013, not surprisingly, put pressure on a variety of bonds.

"For the first time since 2009, the total return of the overall Treasury bond markets was negative; the story for other types of bonds, including investment-grade corporate and municipal bonds, was also negative, though to varying degrees," Janney Montgomery Scott wrote in commentary reviewing 2013.

The negative return on many bonds was not lost on banks.

Banks continued to rely on securities for income in 2013 as deposit growth once again outstripped loan growth, leaving banks flush with excess liquidity on their balance sheets. In 2013, deposits among U.S. banks and thrifts grew 3.49% from year-earlier levels, while loans climbed 2.62% from the prior-year period. That dynamic has been relatively consistent over the last few years and sent banks' loan-to-deposit ratios to 70.53% by year-end, down 59 basis points from the close of 2012 and well below pre-crisis levels.

The excess liquidity on bank balance sheets has weighed on net interest margins. Banks have deployed some of that liquidity into their investment portfolios but have been cautious to put too much money to work given the expectation that rates could rise further, perhaps materially, from current levels.

The allocation in banks' investment portfolios did not waver that much over the last year, with institutions again opting for large concentrations of residential mortgage-backed securities (RMBS), government and agency securities, and municipal bonds. 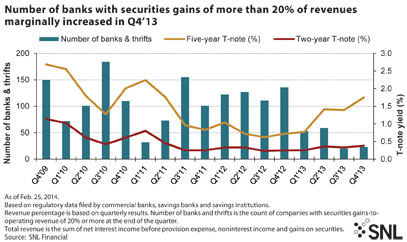 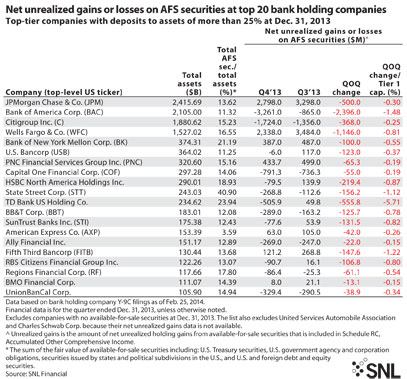 Munis have their attractions

Banks maintained significant exposures to the municipal bond market even after witnessing the pressure munis faced in the late spring and early summer of 2013, when investors pulled billions of dollars from municipal bond funds. Seeking higher yields, banks bought into the pressure on muni bonds in the second quarter and allocation toward the muni market continued throughout the year, building their exposure to the muni market to $291.86 billion, or 23.52% of their securities portfolios, on a median basis, from $284.05 billion, or 23.15% of their portfolios at the end of the third quarter, according to SNL data. 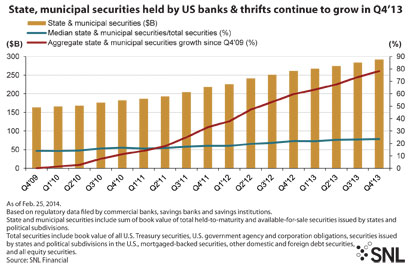 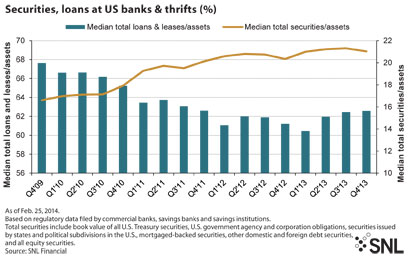 Cullen/Frost Bankers Inc. is one bank that remains committed to deploying funds in the muni market. The San Antonio-based bank still holds substantial levels of cash and has made it clear that it would prefer to deploy those funds by making loans, but Cullen/Frost CFO Phillip Green noted on the company's 2013 fourth-quarter earnings call that it simply cannot sit on all the liquidity.

The industry as a whole, though, continued to invest in other asset classes and virtually held its exposure to government securities—securities issued by the Treasury, government agencies and government-sponsored agencies—fairly steady even as that market faced sell-offs late in the second quarter and then again late in 2013.

Government securities equated to 22.34% of banks' investment portfolios, on a median basis, at the end of the fourth quarter, nearly flat with 22.36% in the prior quarter, but up from 20.53% a year earlier. The level is still well below the composition levels witnessed in 2009-2010. 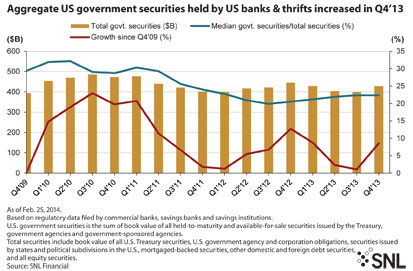 Banks have modestly reduced the size of RMBS balances in their portfolios over the last year. RMBS could experience more significant price movements in a rising rate environment due to negative convexity from extension risk, or the risk that investors will hold below-market rate securities for longer periods of time since prepayment speeds will slow when rates rise.

Some banks have taken more extensive actions to capitalize on higher rates and have repositioned their investment portfolios.

For instance, Central Pacific Financial Corp. CFO Denis Isono said on the company's fourth-quarter earnings call that it executed a bond swap where it sold lower-yielding agency debt and agency MBS and reallocated funds into higher-yielding non-agency CMBS and RMBS, corporate bonds and agency MBS. As a result of the moves, as well as slower premium amortization on MBS in the period, the taxable equivalent yield on Central Pacific's investment portfolio rose to 2.43% to 2.18% in the third quarter, he said.

Banks will likely contemplate whether to alter their investment decisions as they prepare for rates to rise further. Long-term interest rates have fallen more than 30 basis points from the levels witnessed at the end of 2013, even as the Federal Reserve has continued to taper its asset purchases in the markets. Janney Montgomery Scott noted in its 2013 review that the Federal Reserve was primarily responsible for the increase in rates last year, but it is much harder to argue that the end of its bond-buying program will have as much of an impact on interest rates in the coming year.

Janney wrote in the report:

"For one, policymakers have been very clear in telegraphing their plans, which has allowed the markets to 'price in' the end of Fed bond-buying. For another, there's very low probability that the Fed will change its policy of holding short-term interest rates near zero, at least not in 2014."

The Fed's purchasing power in the Treasury market might not be the only market player to consider, and where rates move in the future might ultimately depend on many other factors, including net foreign purchases of Treasuries, according to Robert Albertson, principal and chief strategist at Sandler O'Neill. Albertson noted in a late January report titled, "Tapering Everywhere," that the Fed is declining its purchases of Treasuriess just as the amount of net new Treasury debt slated for auctions is likely to shrink due to declines in the budget deficit.

The real "wild card," however, will be foreign demand for Treasuries, Albertson said.

During the four-year period between 2009 and 2012, the strategist noted that the Fed's net purchases averaged $25 billion per month, or 23% of demand, while net foreign buying averaged $48 billion per month, or 48% of demand, during the same time period. Net foreign purchases have already fallen by $33 billion from those levels, he said, leaving questions about whether domestic retail and institutional buyers can pick up the slack, even if the dollar volume of Treasury auctions decline.

"This seems unlikely without additional yield as investors continue to flee bonds for equities, ironically a shift the Fed intended," Albertson wrote.

Still, not everyone fears a dire scenario. The Janney team predicted that rate risks in bond markets in the coming year are likely to be somewhat lower than they were in 2013.