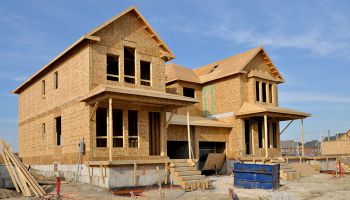 After a miserable run following the real estate bust of the past decade, construction and development lending in the U.S. bottomed out in 2012 and began to inch back up in 2013, an SNL analysis shows.

Coming back from the bottom

In the past 10 years, loans in the category peaked at $576.27 billion in 2007, then began to slide in 2008 and nosedived over the following three years. This was in large part the result, of course, of the bursting of a massive housing bubble that shocked real estate markets, led to a credit crunch, and paralyzed development of all kinds amid a national recession.

"It's not an enormous rebound, but it is meaningful because this was a category that was just blindsided," Scott Siefers, a Sandler O'Neill & Partners analyst, told SNL. 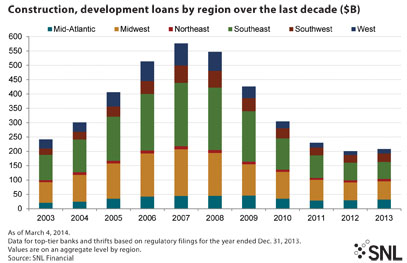 Both multifamily and single-family contribute

Much of the activity over the past couple of years has

been driven by multifamily housing projects, as more Americans sought to rent in the wake of the 2008 financial crisis, boosting demand for apartments.

"Multifamily has been the driver for just about everybody," Siefers said.

But analysts say the economy has healed enough in recent years for housing markets in many parts of the country to recover and begin to generate demand for new single-family projects. And, in select areas, office and warehouse construction is coming back some.

"You are hearing more and more about banks' willingness to get back into the construction and development arena," Siefers said.

Banks active in relatively vibrant economies, such as Silicon Valley and Greater San Francisco—where a strong technology sector is boosting employment and a need for housing and new commercial space—see heightening demand. Lenders in swaths of Texas, too, are increasingly busy. A solid energy sector is helping to drive the Texas economy. The same can be said for North Dakota.

Elsewhere, a real estate rebound in Arizona, where a housing depression crushed the local economy a few years ago, is now boosting demand for C&D loans, bankers and analysts say. C&D lending in the Grand Canyon State rose more than 30% during 2013.

Paul Hickman, president and CEO of the Arizona Bankers Association, told SNL in a recent interview that a range of real estate-related lending activity picked up in Arizona last year as the state's economy gathered momentum. But he noted that percentage gains were exceptionally high in many cases because the state is coming off a deep low.

"We had a stretch for a while there where there was almost no development," he said. "Things are coming back now." 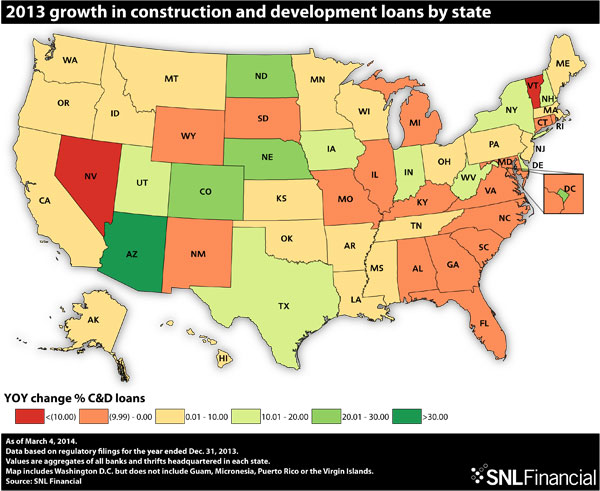 On a national level, several large regional banks say they are stepping up to meet rising demand for C&D loans. "The stronger names with both excess capital and liquidity are dipping their toes back in," Siefers said.

"In terms of demand, we are actually seeing pretty good demand in commercial real estate construction now," P. W. Parker, U.S. Bancorp vice-chairman and chief risk officer, said while speaking at a conference in February. "That started out with multifamily, but it has expanded beyond multifamily. … So there is a broadening of demand in commercial real estate, which is positive."

"[W]e are encouraged by what we're seeing there," John Asbury, senior executive vice-president of Regions' business services group, said at a February conference.

"And I would point out that, with the rise in origination of new commitments, it's important to bear in mind that there is a time delay effect," Asbury added. "So, from the time a construction line is closed" to the time funding occurs "can be six months because there's so much equity in these projects."

As such, figures could build this year, he suggested.

Significant growth, however, is largely dependent on greater economic expansion, he and others say. The U.S. economy, while expanding, has done so only gradually for years.

Sung Won Sohn, a former bank executive and currently an economist at California State University, Channel Islands, told SNL that C&D lending is coming back, but "understandably in a small way." 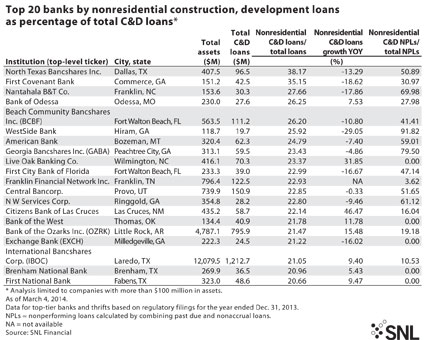 Outside of particularly robust markets, Sohn said, banks remain generally cautious on various types of lending, including C&D. While they are eager to produce loan growth, few want to get entangled in risky real estate ventures or to attract added regulatory scrutiny, he said.

"Obviously, banks are going to be very careful for some time after all the problems that we had," Sohn said. "But there are some good [C&D] opportunities out there, and banks want to go after the good ones. So, it is growing, and I think it will continue to, but it probably won't happen very rapidly."

Siefers agreed. The Sandler analyst said it is reasonable to anticipate that the rise in C&D lending last year would extend into 2014. But it is too early to gauge whether any increase will be anything more than a modest bump. "It's tough to tell yet if this will ultimately prove significant," he said. 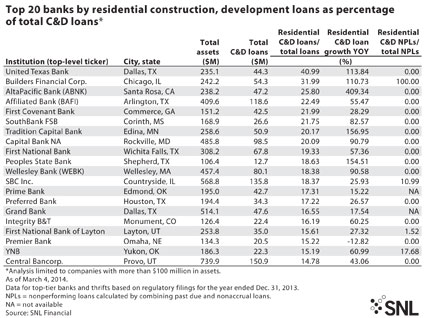