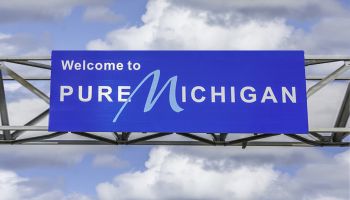 After a long and arduous stretch that got its start well before the 2008 financial crisis rocked the national economy, conditions in Michigan are improving and providing some banks in the state motivation to push for greater market share.

"Things are vastly improved throughout the state," Dennis Koons, president and CEO of the Michigan Bankers Association, told SNL. "That is saying a lot because we had a long, rough period."

It is indeed saying a lot.

Some important context: Michigan has for decades been hampered by a secular decline in American manufacturing, one punctuated by the deterioration of U.S. automakers that reached its depths in the last decade. Detroit, the state's largest city and once the industrial heart of a region blossoming with manufacturing work and a swelling population, has been devastated by recession, poverty, and lofty levels of crime for decades.

Its population peaked at 1.86 million in 1950. Today, only about 700,000 people live in Detroit, leaving its population close to the level it was in the early 1900s. In 2012, Detroit was home to the highest violent crime rate of any large city in the U.S., according to the FBI. Its jobless rate still ap proaches 15%, more than double the national level. 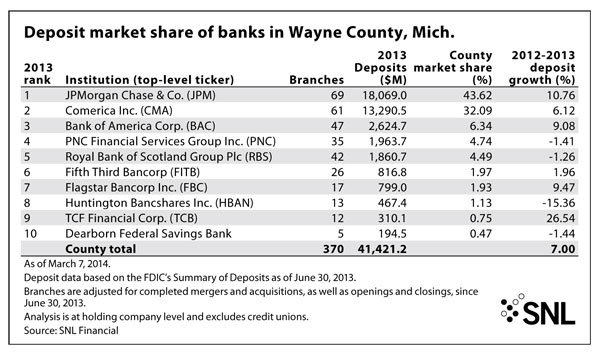 Last year, its finances in shambles and its tax base decimated by the flight of citizens, the city of Detroit filed for bankruptcy. Detroit's misfortune has spilled into neighboring cities and suburbs, as residents flee to communities farther removed from the city's blight in favor of safer neighborhoods and better schools.

That explains why Wayne County, where Detroit is located, is projected to see its population decline further between 2013 and 2018, according to ESRI. Declines or only modest levels of growth are forecast for several nearby counties.

But Detroit, after years of allowing pension liabilities to mount and services such as law enforcement to dwindle, is finally tackling its woe.

"The problems in Detroit are being addressed as opposed to continuing to be swept under the rug," Koons said.

The city is working on a plan to restructure its $18 billion debt via major cuts to city workers' pensions and retiree health benefits, in addition to lower payments to bondholders. It is trying to emerge from bankruptcy this year. The cuts are painful moves for those affected, of course, but officials say they are necessary to stop the bleeding and bring Detroit back from the brink. A recovering Detroit would mark the final major step—and the biggest—in a comeback that already is well underway elsewhere in Michigan. 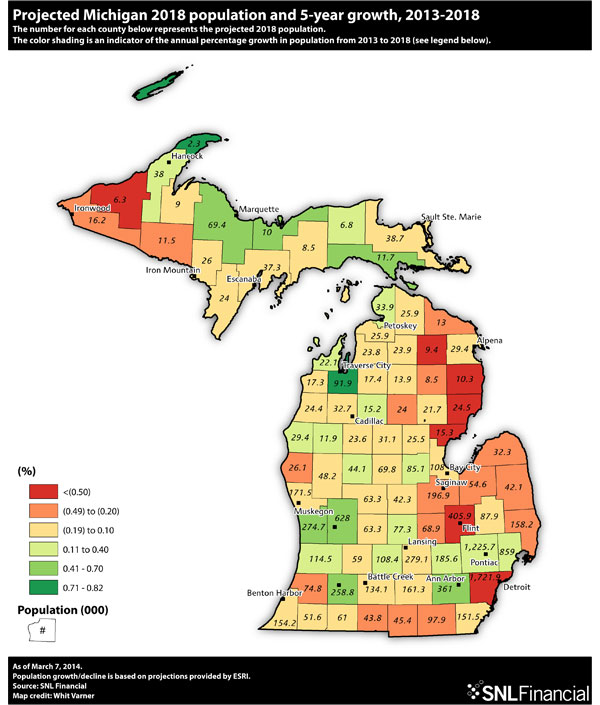 Michigan's unemployment rate, which soared past 14% in 2009 and marked the highest of any state in the country at the time, has dipped below 8%. A revived U.S. auto industry following the 2009 bankruptcies of General Motors Corp. and Chrysler LLC has been a key driver of the recovery. A recent SNL analysis found that auto loans at banks and thrifts advanced 10.39% in 2013. But an emphasis on diversification and growth in industries such as health care and information technology, as well as a rebounding tourism industry in parts of the state, also get credit, bankers say.

As this has developed, loan demand has gradually emerged and some bankers are betting on pockets of strength in the year ahead.

Case in point: Chemical Financial Corp. After reporting an increase in profits and double-digit loan growth in 2013, the Midland, Mich.-based bank this week inked a $120 million all-cash deal to buy Traverse City, Mich.-based Northwestern Bancorp. On a conference call to discuss the acquisition, executives said that they view the northwest section of Michigan as an area ripe for both consumer and commercial loan growth amid strength in health care, education, manufacturing, agriculture, and tourism.

"We believe we will see strong loan growth" following the deal, Chemical CFO Lori Gwizdala said. "We estimate that going forward we can achieve double-digit organic loan growth in this market." 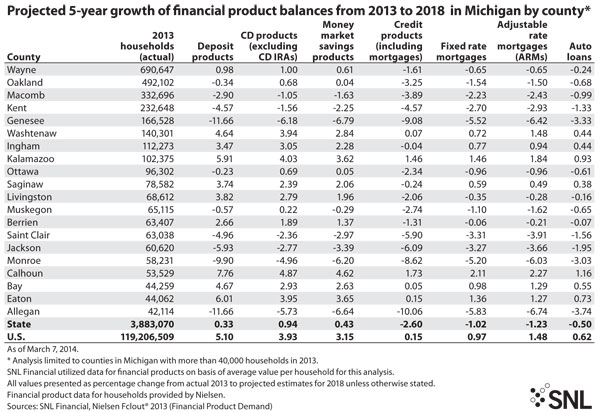 Old National Bancorp, based in Indiana, also is betting big on Michigan.

In January, it announced it would buy Ann Arbor, Mich.-based United Bancorp Inc. The acquisition would double Old National's presence in Michigan, to 36 branches, and provide it entrée to the Ann Arbor market.

Old National President and CEO Robert Jones, speaking to analysts after announcing the deal, noted that Ann Arbor is home not only to the University of Michigan, but also a relatively diverse and solid economy, an unemployment rate that is below the national level, and household incomes that are higher than the national average.

"I would say we've been talking about Michigan for five-plus years and people used to look at me like I was nuts when I said that we wanted to go to Michigan," Jones said while presenting at a conference in February. "I'm born in Detroit, so don't take this wrong, but remove Detroit, Michigan's economy is doing fairly well."

Ann Arbor benefits from the technology and health care sectors, he added, and it has "a lot of service-based industries. … It's a very diverse economy. When most people think Michigan, they think auto, and it clearly has got a lot of auto dependency. But it's going to be very competitive" on several other fronts, too. 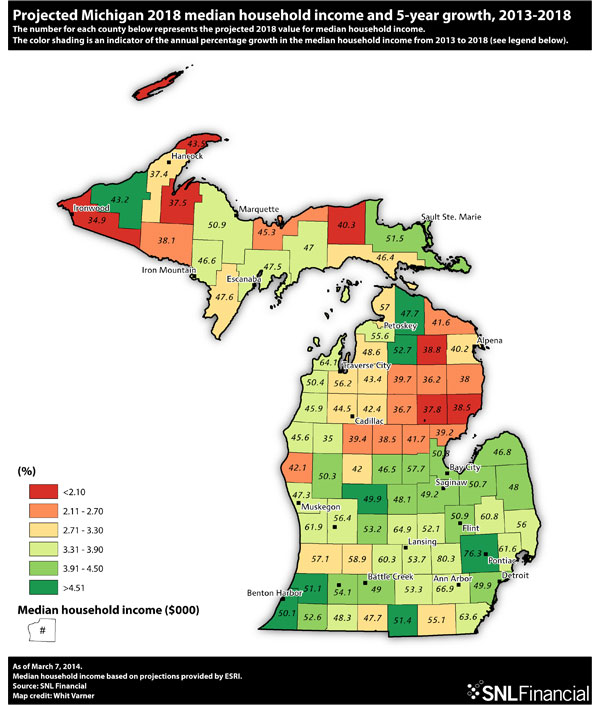 To be sure, Detroit still has a long recovery road before it, one potentially fraught with fiscal landmines. And Michigan as a whole is not yet on par with the likes of Texas, whose economy has been bolstered by a surging energy sector.

Moving more of a bank to Texas

The evolution of Comerica Inc. helps illustrate the difference between the two states. According to a February presentation by Curtis Chatman Farmer, vice-chairman of Comerica's retail bank and wealth management operations, nearly three-fourths of the company's banking centers were in Michigan in 2003.

Today, Farmer said, less than half are. The bank's branch network has grown about 35% over the past decade, the executive said, but the bulk of that came with expansion in Texas. During that period, Comerica moved its headquarters from Michigan to Dallas, punctuating the bank's relative bullishness on Texas.

But Ralph Babb Jr., Comerica's chairman, president, and CEO, told analysts earlier this year after reporting 2013 earnings that the company remains committed to a strong presence in Michigan, noting signs of recovery.

Whitley Cummings, president of Cummings & Co. LLC, has advised banks in Michigan and says conditions for lenders in the state are clearly much improved. He told SNL the fact that the likes of Old National are going after more market share while talking positively about the future of Michigan's economy amplifies this.

"There are more banks able and looking to do some things there," Cummings said. "It's better." 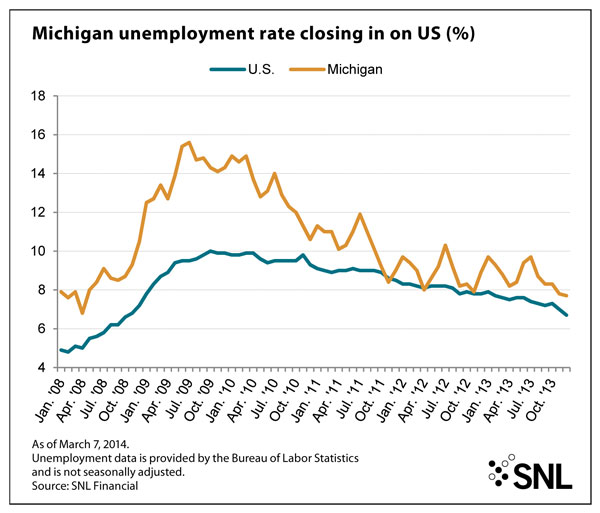