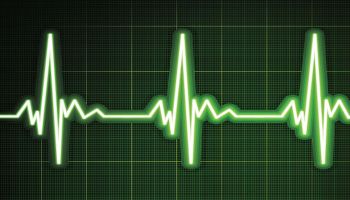 Even after the Federal Reserve tweaked the results to address errors, Dodd-Frank Act stress tests revealed what most on the Street anticipated: Robust capital remains not just a priority but an established strength that should help the nation's top lenders, as a group, weather another economic downturn.

The Fed on March 20 released the initial results of annual Dodd-Frank stress tests of bank holding companies with $50 billion or more in assets. Results showed that the vast majority of the industry's big players could withstand the shock of another steep recession—one in which unemployment spikes to above 11%, housing prices fall 25%, and equity prices plunge nearly 50%. That was the worst-case scenario under which 30 large banking companies conducted stress tests, 12 more than in 2013.

On March 21, the Fed issued a correction to those results, noting changes to some banks' minimum, post-stress Tier 1 common capital ratios in the severely adverse scenario. The Fed followed this with a fully corrected version of the results on March 24.

Among other changes, the Fed said the 30 companies subject to the stress test would see their cumulative Tier 1 capital fall $283 billion, compared to the initially reported $286 billion, under its nine-quarter severely adverse scenario beginning in the fourth quarter of 2013. The Fed also made a "minor technical correction" to Tier 2 capital. 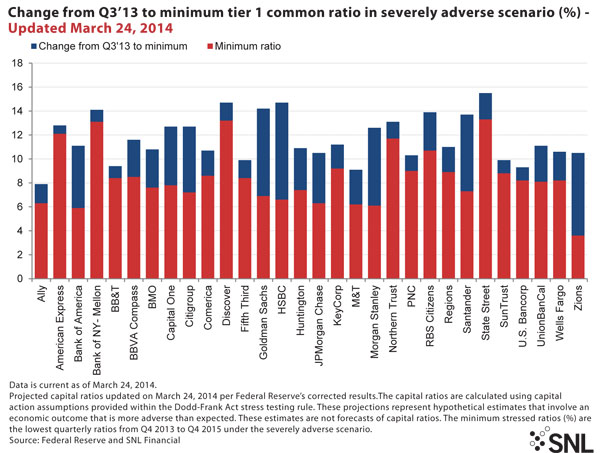 The results show that all but one of the 30 banks—Zions Bancorp—would have ample capital to survive the exceptionally poor economic conditions and continue to lend. Banks needed to show that even under the hypothetical worst-case conditions outlined by the Fed they would have a Tier 1 common capital ratio above 5%. Over the course of the severely adverse scenario the 30 banking companies would collectively suffer $366 billion in total loan losses. The aggregate Tier 1 common capital ratio would drop from the actual 11.5% in the third quarter of 2013 to a low of 7.6% in the hypothetical scenario. That is well above the 30 firms' actual tier 1 common ratio of 5.5% at the start of 2009, the Fed noted.

"Regulators threw every economic calamity they could think of at our nation's largest banks, and these institutions once again proved their ability to handle even the most extreme financial distress," Frank Keating, president and CEO of ABA, said in a statement following the release of the results. "This should allow more institutions to proceed with their business plans, paying dividends, attracting investor capital, and expanding services to their customers and communities." 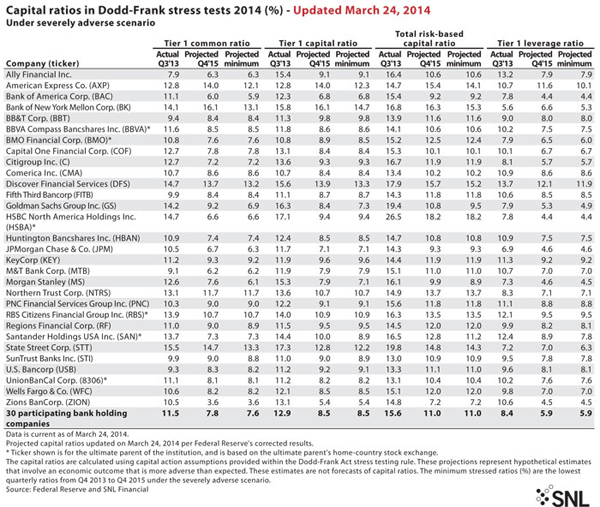 Zions did not meet the regulator's standard of 5%. The Fed's initial release showed that Zions' Tier 1 common ratio would be 3.5% under the most severe projections. In an updated release the following day, the Fed amended this figure to 3.6%. A year ago, Ally Financial Inc. was the only company that fell short; the Fed said then that Ally's Tier 1 common ratio could fall to 1.5% in a steep downturn. This time around, Ally showed a projected low-point Tier 1 common ratio of 6.3%.

According to the results, Bank of New York Mellon Corp., Discover Financial Services, and State Street Corp. would retain the strongest Tier 1 common ratios at the low points of a recession; all would stay above 13%.

Why the stress on stress tests

The favorable results are important in that they affirm that the industry has comfortably distanced itself from the worst of the 2008 financial crisis and ensuing recession, the deepest in decades, observers say.

Brett Rabatin, an analyst at Sterne Agee & Leach Inc., expected that the big banks as a group would complete the stress tests without major issue. He noted that maintaining capital strength has been woven into the fabric of the industry since the financial crisis, which was the impetus for the Dodd-Frank legislation and the stress tests.

The economy appears to be headed in the right direction, with employers adding jobs and housing markets on the mend, says Sam Pappas, president and CEO of Mystic Asset Management Inc. But the recovery, he added, has proven stubbornly slow, making it difficult to make meaningful predictions on everything from loan growth to interest rate hikes.

All of that also amplifies the importance of the stress tests, he said, as another deep recession, while not likely, remains a possibility that banks must always guard against.

"There are definitely still concerns out there," he said. "We are headed in the right direction, but it seems like we are only grudgingly moving forward."

In related news: Results of the latest Comprehensive Capital Analysis and Review took some industry observers by surprise, as the Federal Reserve objected to five of the 30 participants' plans, and approved another two banks only after they resubmitted. bankingexchange.com will carry SNL Financial’s coverage on this next week.