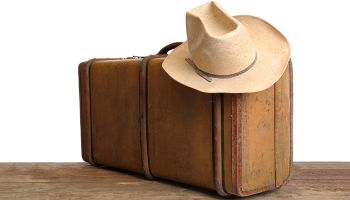 With a state economy steadily humming along, bolstered by a robust energy sector and population growth, Texas is increasingly appealing to growth-minded banks.

Lenders within the state are thankful to be there and, in some cases, eager to acquire competitors to gobble up market share to fuel even greater growth. And more banks that are not already in Texas are closely studying deal possibilities in order to get into the state, analysts say.

What Texas offers to the world

There is good reason for that.

Entering the last recession, the state's unemployment rate was lower than the national rate, and it emerged from the downturn in the same favorable position. Today, the jobless rate in Texas is below 6%, while the national rate still approaches 7%. Between February 2013 and the same month this year, Texas total nonfarm employment increased by 314,200 jobs, or 2.8%—well ahead of the national gain of 1.6%, according to Texas Comptroller Susan Combs.

Over a recent six-month stretch—between September 2013 and February 2014—oil and natural gas production tax collections in Texas were 29% higher than during the same period a year earlier. 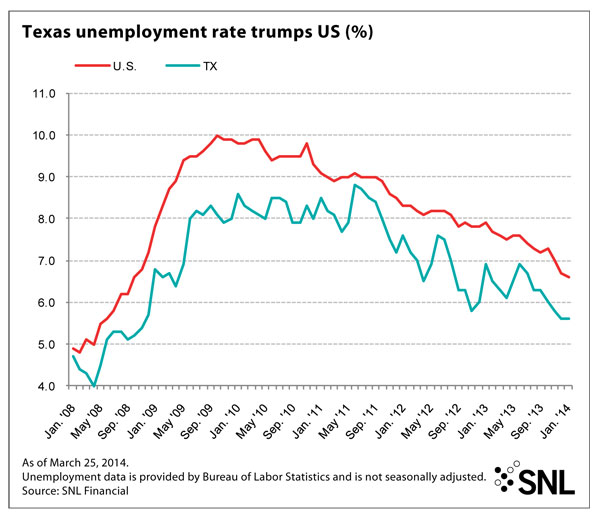 U.S. Census Bureau population data for 2013, released in March, found that the nation's population grew 0.72% to 316.1 million. Among metro areas with more than 5 million residents, Texas' two largest markets produced the greatest growth in percentage terms, as FIG Partners analyst John Rodis noted. The Houston area grew 2.23% and the Dallas metro grew 1.61%. The median for all metro areas with more than 5 million was 1.13%.

"From all indications, things are going well" in Texas, Rodis told SNL. "From a macro perspective, really no other [state] compares."

And, conditions are expected to continue to improve.

The Texas population is projected to grow through 2018, with advances in several areas across the state. 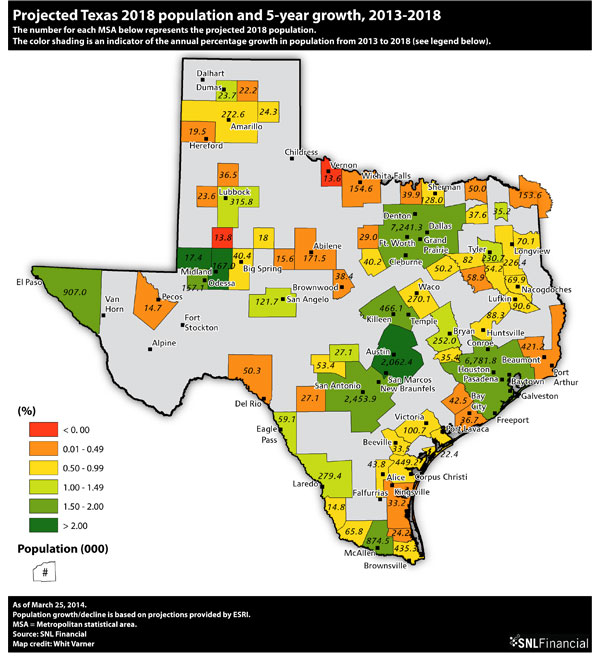 All of that makes Texas appealing to banks. Where there is population and income growth, Rodis said, there are potentially profitable and likely growing customer bases.

"It's just a fact that there is a lot of business" in Texas, the analyst said.

Rodis said that, in addition to pushes for organic growth by banks already in the state, others on the outside looking in are eager to make a Texas play. The FIG Partners analyst said Midwest banks, such as UMB Financial Corp. and Great Southern Bancorp Inc., for example, are eyeing ways to get into the state. He noted that Tupelo, Miss.-based BancorpSouth Inc. recently pulled the trigger on a deal that will provide it entrance to central Texas.

In January, BancorpSouth agreed to buy Temple, Texas-based Central Community Corp. ($1.34 billion) in a cash-and-stock deal that is slated to close in the second quarter. Central Community is the holding company of Austin, Texas-based First State Bank Central Texas. That bank operates 31 full-service branches: 11 in the Austin-Round Rock, Texas, area; 11 in the Killeen-Temple-Fort Hood, Texas, area; two in Marble Falls, Texas; and seven in various other communities in central Texas.

"Austin will be by far the largest market that we serve within our footprint," James Rollins, CEO of BancorpSouth, said at a recent conference.

By acquiring a smaller bank in the market, BancorpSouth can move in and raise lending limits, opening the company to bigger commercial customers and more loan growth, he said. "They pretty much were in the $5 million and down market, and there's a whole lot of $10 million and $15 million and $20 million credits over there; they can fit right within what we like to do all day long. So, that's a real plus for us to be able to grow."

Deposits are projected to grow in Austin between 2013 and 2018, as are lending products such as mortgages and auto loans. The same is true for Greater Dallas, Houston and San Antonio, among several other markets, as well as Texas as a whole. 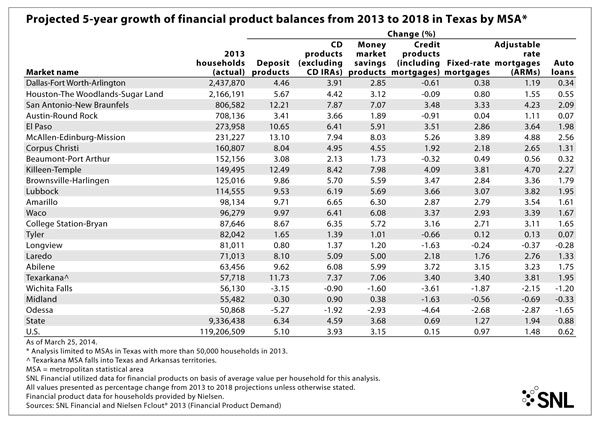 The widespread growth helps to explain why the likes of national players such as JPMorgan Chase & Co., Bank of America Corp. and Wells Fargo & Co. are very active in the state, holding prominent market share positions in the Dallas and Houston areas, among other parts of The Lone Star State.

It also provides reasons for smaller but prominent banks such as Houston-based Prosperity Bancshares Inc. to be active on the M&A front, to buy up smaller players, and gain size and share in order to compete with the big banks, observers say. Prosperity has completed multiple bank deals over the last three years in Texas.

Prosperity Chairman and CEO David Zalman, speaking at a recent conference, amplified his bullishness on Texas.

"If there is anybody that can grow, Texas should have an opportunity to grow," he said, pointing out that early in this decade three Fortune 500 companies have moved from California to Texas.

"So, there is a lot happening for us and there is more and more people moving" into Texas, the Prosperity chief executive added. "I don't think it's [a] barn burner, where things go through the roof, but if anybody has the opportunity for growth, we do with everything happening there." 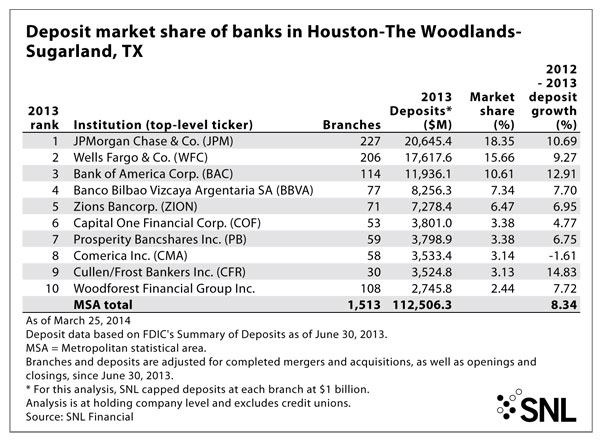 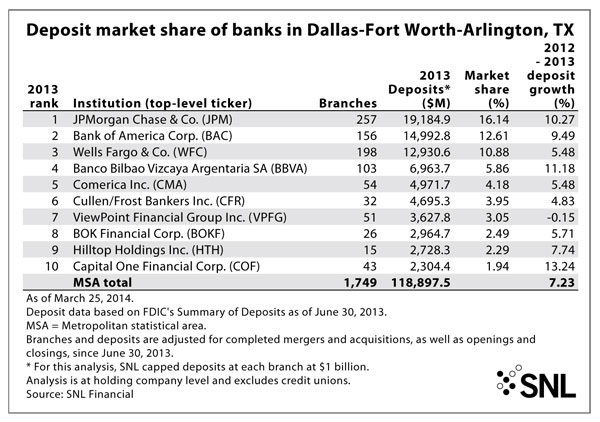 The market share comparison caps branch deposits at $1 billion to minimize the effect of consolidated deposits at non-retail and headquarter branches.

"We've a got a lot of community banks that are hungry for more business," Thompson said in a recent interview.

In doing deals, he said, buyers not only gain entrance to new markets—or deepen their presence in existing ones—they also acquire lending teams, many of which boast strong talent that has been waiting for the higher lending limits and greater resources that larger banks provide, enabling them to go after more business.

"That's a big reason you do a deal—to get that business more quickly, more efficiently than you could on your own," Thompson said. 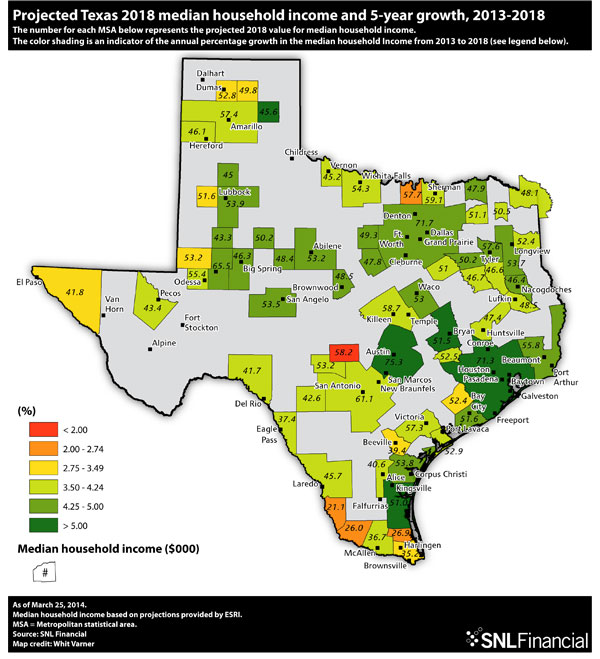