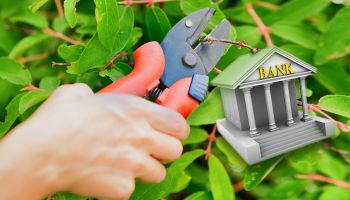 U.S. banking companies shuttered more branches than they opened during the first quarter of 2014, continuing a trend that spanned all of 2013 as bank customers increasingly do more business online.

An SNL Financial analysis found that banks collectively reduced the nation's branch count by 281 locations during the first quarter, roughly on par with the reduction of 276 branches during the final quarter of 2013. Over the course of the past four quarters, banks scaled back by more than 1,500 branches.

Bankers and analysts say that more customers every quarter get more of their banking needs met online or via mobile devices and, as a result, fewer walk into physical branches. That provides banks reason to downsize or close underperforming branches. The steady pace of closures also has been fueled by an almost industrywide desire to reduce expenses in an era of modest loan growth and interest income.

Mark Fitzgibbon, head of research at Sandler O'Neill & Partners LP, told SNL that the trend spans banks of all sizes. "It's across the spectrum," he said. 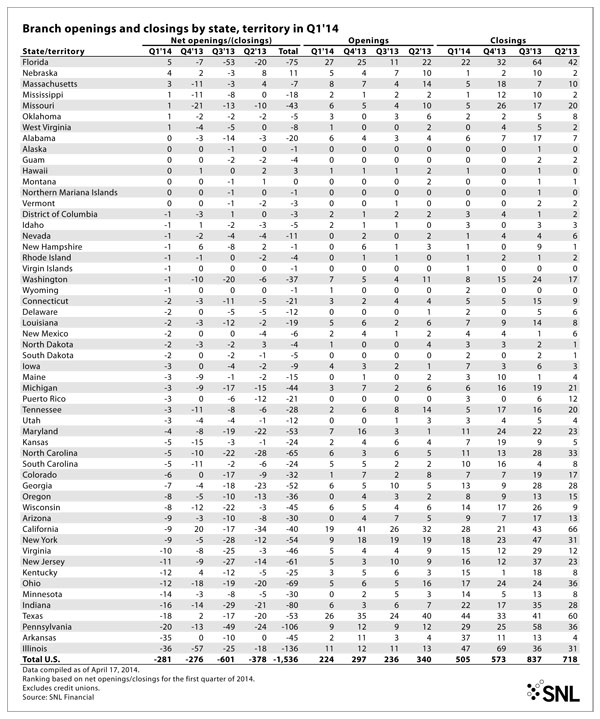 By state, Illinois, Arkansas, and Pennsylvania were home to the greatest reductions of branch counts in the first quarter. Florida, Nebraska, and Massachusetts were the only states to finish the first quarter with net openings of more than one.

In addition to the shift toward online banking, mergers and acquisitions have played a role in branch consolidation. Following acquisitions, buyers typically push hard for cost savings by selling or closing targets' branches that are near their own. Chicago, for one, has been home to several bank deals in the current cycle—both open-bank and FDIC-assisted deals—helping to explain the decline in branches there.

With heavy regulatory burdens and fierce competition for loans continuing into this year, analysts say more banks will be motivated to sell and, as such, consolidation is likely to continue in markets such as Chicago and across much of the country.

That noted, the consensus seems to be that customers' ongoing desire to bank online and via new technology will prove the ultimate drivers of a long-term trend of fewer and smaller branches.

As Brett Rabatin, an analyst at Sterne Agee & Leach Inc., put it to SNL: "Banks are realizing everything is going online." 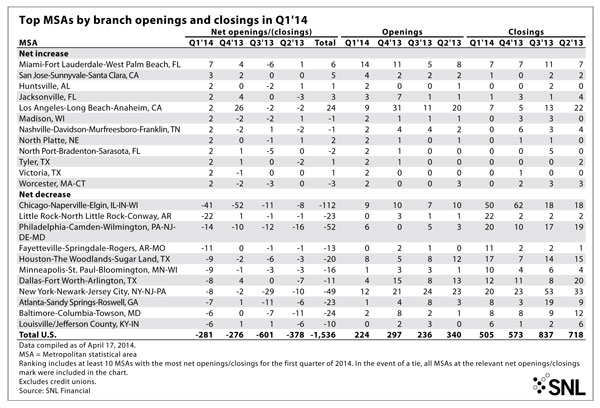 Wayzata, Minn.-based TCF Financial Corp. reduced its branch count by 45 in the first quarter—more than any other bank in the period—the result largely due to its move to consolidate dozens of branches Jewel-Osco grocery stores in the Chicago area during the quarter. The company said it made the move in part to divert more resources to online and mobile banking platforms, as well as expanded ATM locations.

"TCF will continue to look for ways to optimize expenses, leaning on the momentum of the completion of the branch realignment in the first quarter," CFO Michael Jones told analysts this month.

BofA's branch network declined by more than 30 locations in the first quarter, according to SNL.

Brian Moynihan, the Charlotte, N.C.-based bank's chief executive, told analysts this month that the reductions are part of an ongoing cost-cutting effort. But he said the company is still adding customers and deposits through ramped-up use of online banking and mobile devices, "as people effectively carry a branch in their pocket."

While closing some branches, BofA is downsizing others. It has what the bank calls "express formats," Moynihan said, where branches are smaller and staffed more leanly.

New York-based Citi, meanwhile, closed 11 branches during the first quarter and is planning to unload more. The company this month, for example, is reportedly looking to sell some 50 of its California locations, mostly in rural areas, as it looks to focus its resources on large urban markets. 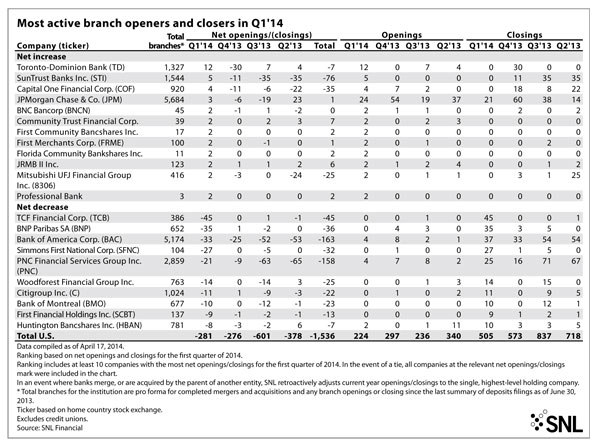 Even openers look at cost trims

Even those banks such as Cathay General Bancorp that are selectively looking to add branches also are looking at ways to trim costs at their physical locations while emphasizing their online offerings.

Los Angeles-based Cathay recently disclosed a plan to acquire a branch in San Francisco to capitalize on the booming economy there, for example. But at the same time, it is looking across its branch network and studying the need for branch staffing levels by time of day and other measures, recognizing that "a significant migration to the Internet" is cutting into foot traffic at many branches, Cathay CFO Heng Chen told analysts earlier in April.

The idea is to scale back staff at times when traffic is particularly light but keep levels higher when customer activity is heavier. Doing this could save the bank money while still meeting customers' needs.

That latter part is noteworthy, analysts say, because while branches are becoming less important than they once were, they are not headed for extinction. Customers still like to meet in person with bankers when seeking major loans, for instance, and branches also continue to serve as the public face of banks, functioning as important marketing tools in heavily traveled areas.

"Banks are reining in" their branch networks "as they look to use technology in bigger and bigger ways," Fitzgibbon said. But they are "not completely" ditching branches. "They still have relevance in many cases." 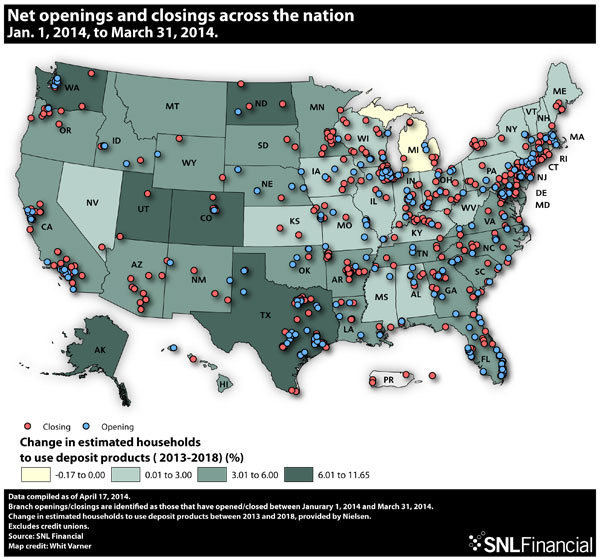