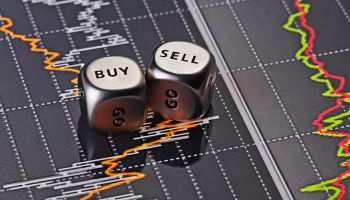 Banks are taking advantage of higher stock valuations to use their currencies more often when acquiring other banks.

Publicly traded banks have seen their stock multiples expand considerably over the last few years, and many institutions are tapping into the newfound strength in their stock by more regularly offering it as consideration in an acquisition.

On the other side of the table, sellers have been willing to take buyers' stock when handing over the keys to their institutions because the currency has greater value today than it did in the recent past.

Sellers have also seen the value of that currency increase after a deal is announced, particularly in cases of transformational transactions or when buyers have subsequently announced additional accretive acquisitions.

"The people that sold early on have just made a mint because each deal has been a fair deal and it's worked out great for both sets of shareholders," R. Lee Burrows Jr., CEO of Banks Street Partners LLC, said in a recent interview. 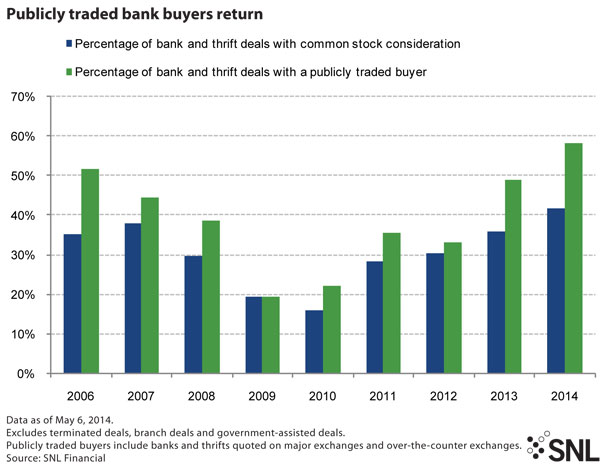 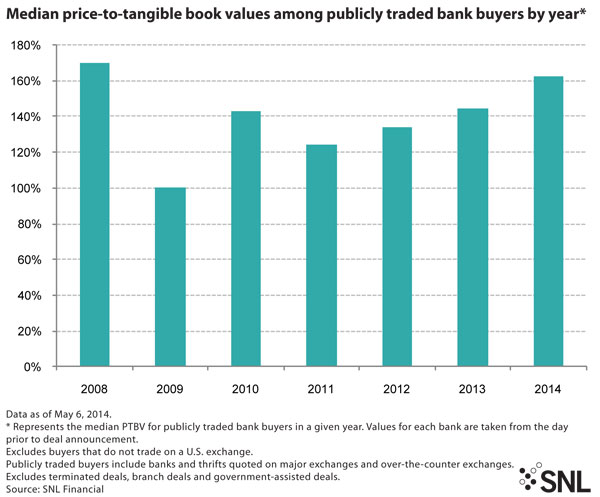 In the past, sellers could receive a "double dip," months, if not years down the road, if their original acquirer decided to sell itself to another buyer.

Now, sellers are often receiving similar boosts to the stock consideration they received, as the Street has rewarded repeated buyers that subsequently ink another accretive deal. Burrows said that boost is almost like the "new double dip."

In some cases, the added boost that a seller can receive after a deal is announced can be meaningful. Joseph Berry Jr., managing director and co-head of depositories investment banking at Stifel Financial Corp. unit Keefe Bruyette & Woods Inc., noted at the SNL Community Bankers Conference in April that post-deal-announcement returns have become a larger part of the deal consideration, particularly in cases of transformational deals.

Berry defined transformational deals as transactions where the seller's assets represented more than 25% of the pro forma company, specifically looking at those transactions where the buyer expected median EPS accretion of at least 15%. Sellers in those deals between 2011 and 2013 received just a 19% one-day market premium when agreeing to partner with another institution, which is well below the 40% one-day premium that sellers received in other deals valued at $50 million or more.

In some cases, sellers have seen the value of that consideration increase dramatically. For instance, Burrows highlighted the kicker that Peoples Bancorp. shareholders received after selling to SCBT Financial. SCBT Financial—which has since changed its name to First Financial Holdings Inc.—agreed to acquire Peoples at just 61.4% of tangible book value, but the seller has watched the stock it received move substantially higher after that, rising further when the buyer inked plans to acquire Savannah Bancorp and again after announcing its purchase of First Federal.

Since the Peoples deal was first announced, shares of First Financial have risen more than 95%.

First Financial's management team has noted several times that the company can land deals because it is seen as the acquirer of choice by many institutions. The Columbia, S.C.-based bank also has a superior currency, trading at a significant premium to the SNL Bank & Thrift Index in each of its last two acquisitions.

Publicly traded acquirers boast stronger currencies now than they have in quite some time. Publicly traded buyers traded at a median of 162.2% of tangible book value on the day before they announced acquisitions in 2014, up from 144.6% in 2013, according to SNL data. Buyers are now trading at the highest price-to-tangible book multiples they have since before the credit crisis.

Buyers' currencies have increased as banks' credit quality and profitability have improved, helping attract broad institutional money back to the bank group. The return of funds has helped lead to considerable multiple expansion in bank stocks over the last year. The SNL Bank and Thrift Index traded at 167.1% of tangible book value as of May 8, compared to 149.1% a year earlier and 143.7% two years earlier, according to SNL.

Publicly traded buyers have enjoyed a similar path of multiple expansion and maintained strong currencies in part because investors are showing strong support for many bank acquisitions. SNL has found that investors have consistently supported deals over the last two years, and more sellers seem to be recognizing the extra kicker they can receive when a deal that includes stock as part of the consideration is well-received by investors.

However, some recent, sizable deals have not seen the same resounding support from the investment community. Shares of Southside Bancshares Inc. fell roughly 8.5% and Valley National Bancorp shares dropped close to 3% on the first trading day after they announced their respective $300 million-plus acquisitions of OmniAmerican Bancorp Inc. and 1st United Bancorp Inc.

The deals could be isolated instances. And the Street might in time even buy into the strategic merit of those transactions.

But clearly investors are not giving bank buyers carte blanche when it comes to acquisitions.

And the discipline that the Street demands from buyers just might serve as a governor on how high multiples can expand without a material improvement in banks' earnings stream and the broader economy.