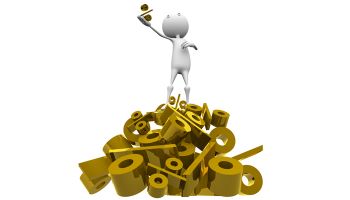 Eleven of the 25 biggest public banks and thrifts in the U.S. reported that earnings per share improved in the first quarter from year-ago levels. Another 11 institutions reported lower EPS figures, while the remainder saw no change.

Earnings growth trends were even more favorable across a broader group of publicly traded banks and thrifts. SNL analyzed 403 out of 440 major-exchange-traded U.S. banks and thrifts that had reported first-quarter earnings as of May 7. Of that number, 57.82% saw year-over-year EPS growth, 5.21% saw no change, and 36.97% reported a decline in EPS from the prior year.

Bank of America was the only bank among the top 25 to report a net loss in the first quarter, largely due to $6.0 billion in litigation expenses. The company took analysts aback by posting a loss of 5 cents per share, 10 cents lower than consensus estimates.

Meanwhile, results from Citigroup Inc. topped analyst estimates for the first quarter. Citi, which disappointed in the fourth quarter of 2013 when its EPS came in 10 cents below analysts' expectations, rebounded to net income of $1.23 per share, compared to the FactSet mean estimate of $1.14 per share.

Citi had other issues to grapple with during the first quarter, including an objection to its Comprehensive Capital Analysis and Review submission and the discovery of fraud at its Banamex unit.

Closer look at the broad sample

The banking industry as a whole continues to battle pressure on net interest margins.

Several companies touted improvements in credit quality and declines in nonperforming assets. Among the 403 companies in SNL's analysis, the median loan loss provision decreased to $300,000 from $460,000 in the fourth quarter of 2013 and from $498,000 in the year-ago quarter. However, several banks among the top 25 saw loan loss provisions increase quarter over quarter: SunTrust Banks Inc., U.S. Bancorp, Comerica, Popular, Fifth Third, BofA, and JPMorgan. Zions saw a recovery for loan losses, albeit a lower one than in the previous quarter. Hudson City Bancorp Inc. recorded no provision for loan losses. 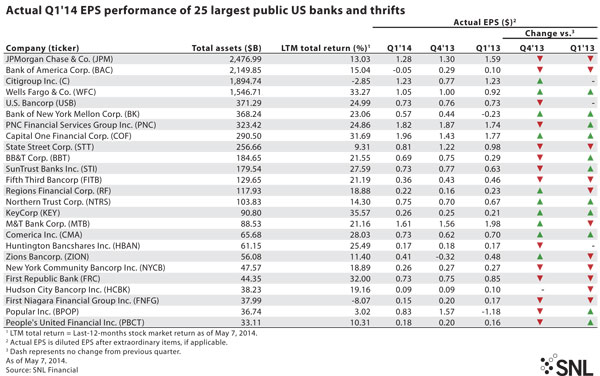 Efforts to rein in expenses carried over into the first quarter of 2014, as many companies continued branch consolidation efforts and headcount reductions in light of lower mortgage banking income.

JPMorgan, for one, has cut its number of mortgage banking employees by almost 3,000 since the end of 2013.

Fixed-income markets were another drag on earnings, although some banks' asset management operations were profitable during the quarter. JPMorgan's revenues from both fixed-income and equity markets dropped, while BofA reached a record-high for asset management fees. Several companies reported increases in deposits and improvement in lending activity, with the exception of mortgages, but also remarked on the issue of excess liquidity caused by the current rate environment.

In some cases, companies whose figures strayed from the trends pointed to seasonal factors and fewer calendar days.

Despite the usual lobbying against regulations, there are signs that the uncertainty over their impact has somewhat abated—at least among larger institutions.

The American Bankers Association dropped its Volcker rule lawsuit. Shortly after regulators released the Volcker rule in December 2013, JPMorgan Chairman, President and CEO Jamie Dimon said he was " glad that we now have certainty," and that the bank would "be able to manage with Volcker at this point." Even a recently discovered accounting error at BofA, which led to the company resubmitting its capital plan—and Citi's CCAR rejection, to a certain degree, been shrugged off in light of otherwise strong numbers. 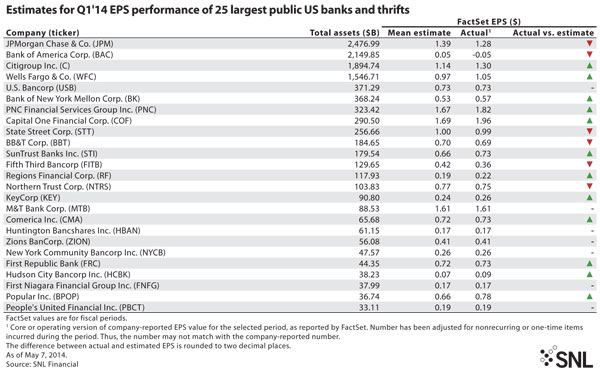 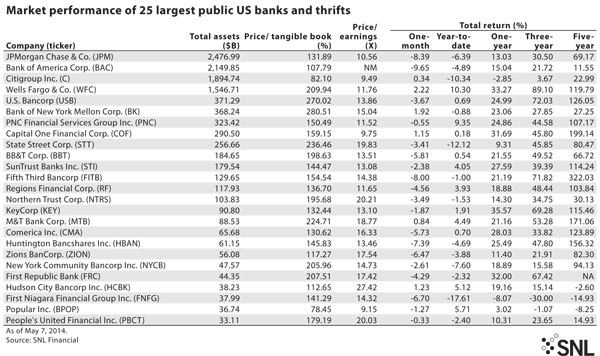 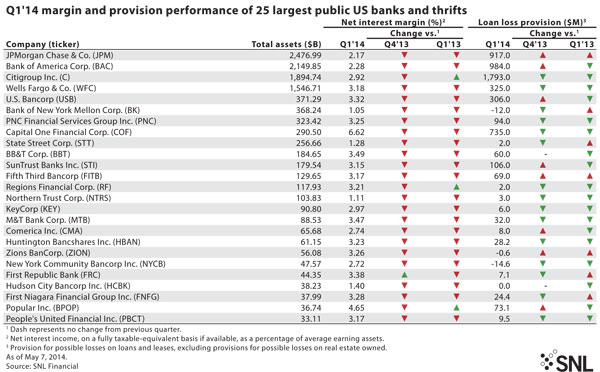