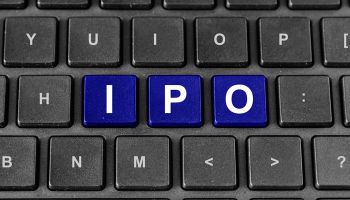 ServisFirst Bancshares Inc. President and CEO Thomas Broughton III remembers occasions in the 1980s when he would fret about his then-bank's stock price. A colleague at the time would try to ease his concerns by telling him there was nothing wrong with the price that 20% compound earnings growth would not fix.

Broughton recalled those memories after Birmingham, Ala.-based ServisFirst—which started in 2005—suffered the worst first-day trading results for any bank IPO completed since 2010, according to SNL Financial data. ServisFirst priced its IPO of 625,000 common shares at $91 per share, at the low end of the estimated range of $91 to $93. Shares opened at $91 on the NASDAQ Global Select Market May 14, and by the close of trading May 15, they had fallen to $83.40.

Reasoning process other IPOs will undergo

Broughton told SNL that those two days were among the worst for the stocks of high-performing banks in a long time. The SNL U.S. Bank Index dropped 1.27% on May 14 and 1.02% on May 15.

"The price was set by the investment bankers where they thought was the best range," Broughton said.

Sandler O'Neill & Partners LP served as sole book runner for the transaction. Raymond James & Associates Inc. was co-manager for the IPO. Sandler O'Neill declined to comment on the offering.

Jacob Thompson, managing director of investment banking at SAMCO Capital Markets, told SNL that the $83.40 closing price May 15 is about 14x earnings, which would be a "fairly reasonable" valuation for the bank. The $91 was probably a bit high, said Thompson, who was not involved in the IPO. "Maybe they overshot the high end a little bit," Thompson said. At 2.3x tangible book value, the stock price seems high and looks more like a takeover value for an M&A transaction, but the 14x earnings is a reasonable trading range, he said. Many publicly traded banks trade more on earnings than tangible book value.

But Thompson said the bank's fundamentals look fine and the franchise appears solid. Asset quality for ServisFirst is good, and its ROE has consistently been around 15% to 16% during the last few years. Over the long haul, he believes the bank should be in good shape and see its value stabilize. "I don't see anything in the fundamentals that tells me that these guys have problems and [explain] why the stock's going down," he said.

ServisFirst executives believed all along that the right time for an IPO would be when they see a smooth runway for a couple of years and when the outlook is positive. "This is the best times I've seen — the best environment I've seen — in more than five years," Broughton said. "It fit the definition finally." Additionally, there are some officers with options that begin to expire in 2015, and the company had promised them there would be a public offering at some point before that.

Broughton called the bank an "organic growth story" and pointed out that it has never made an acquisition. He added that the company is highly efficient and has been able to grow earnings on a consistent basis for many years. 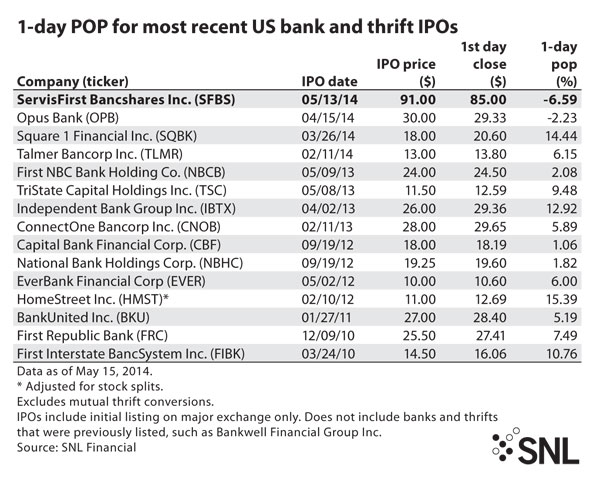 After a few years of tepid IPO activity in the bank space, the sector has seen a pickup in 2014. Thompson said that having a publicly traded currency, and thus the ability to roll up franchises, is a story that still resonates in the marketplace.

"I don't feel like we've reached an oversaturation with IPOs," he said. "I think if you've got some strong-performing banks out there that can go public and have a valuable currency, I think it probably helps from a consolidation standpoint."

Capital raised through the IPO will support ServisFirst's organic growth for the next couple of years, Broughton said. As far as M&A, he said ServisFirst would not want to buy a big bank, one that was not a good cultural fit or one that had many branches. In terms of organic growth, Broughton said ServisFirst is primarily a C&I bank, so it wants to be in markets where there is enough industry that it can be effective.

New Canaan, Conn.-based Bankwell Financial Group Inc. followed ServisFirst by a day and began trading on NASDAQ on May 15. The company priced its initial public offering of 2,702,703 shares of common stock at a public offering price of $18 per share for aggregate gross proceeds of about $48.6 million. Bankwell ended the session May 16 at $18. Prior to the offering, Bankwell's common stock had been quoted on the OTC Bulletin Board.

Thompson said the pace of bank IPOs in coming quarters may not be as strong as it has been in the last six to 12 months, but he noted that there are growing franchises whose natural next step is to go public.