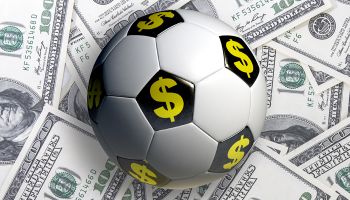 European banks are losing some of their dominance in global asset size rankings as they shrink their balance sheets in the wake of the financial crises of the last six years.

France's Crédit Agricole Group dropped out of the top five largest banks in the world by assets, landing at No. 9 as of March 31, while China Construction Bank Corp. has emerged as the third biggest bank, up from a rank of seventh in SNL's prior ranking published in December 2013.

The largest five banks on the globe, based on their own accounting treatments of total assets, are now: Industrial & Commercial Bank of China Ltd., with US$3.174 trillion; London-based HSBC Holdings Plc, with US$2.758 trillion; China Construction Bank Corp., with US$2.596 trillion; Paris-based BNP Paribas SA, with US$2.595 trillion; and Tokyo-based Mitsubishi UFJ Financial Group Inc., holding US$2.507 trillion in assets.

Crédit Agricole's assets have fallen from US$2.616 trillion at Sept. 30, 2013, to US$2.369 trillion at March 31, as the bank shrinks its balance sheet to become better capitalized and less risky.

Three banks have newly entered the top 100, replacing the two European banks that exited the rankings and Japan's Shinkin Central Bank, which SNL did not include in the current ranking after reconsidering the methodology of included banks. The absence of these three companies made way for new entrants: Boston-based State Street Corp. ranked as No. 96, China Guangfa Bank Co. Ltd. was No. 99 and Singapore-based United Overseas Bank Ltd. took the No. 100 spot.

China is the country with the highest number of banks on SNL's top 100 list (15), followed by the United States with 11 and Japan with eight. Europe as a whole, including Russia, now has 45 of the top 100 banks, down from 47 in SNL's previous ranking. 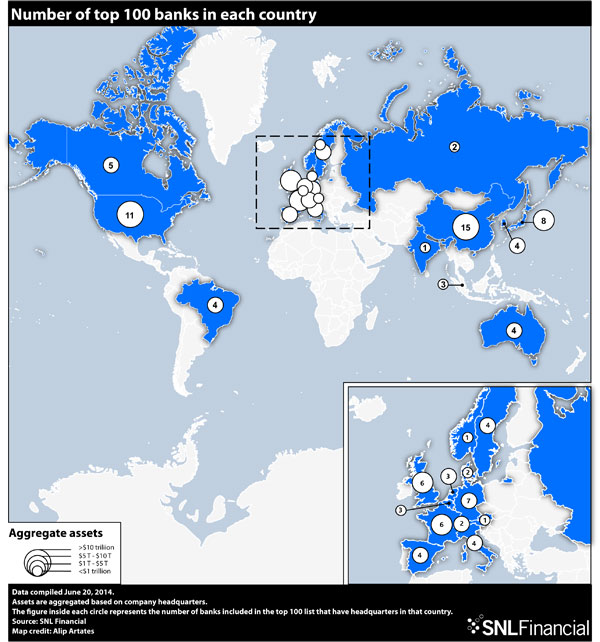 A word about accounting

A company's accounting treatment can have a significant effect on its world rank.

The largest four banks report total assets under the IFRS accounting principle, which requires companies to include the gross amount of derivative assets on their balance sheets. Meanwhile, banks that report under U.S. GAAP report the net amount of derivative assets. New York-based JPMorgan Chase & Co., which ranks as the 6th largest bank, would move up to No. 1 if it reported derivatives on a gross basis instead of a net basis. The change would increase its assets by 40% to $3.475 trillion from $2.477 trillion. (Note: SNL did not perform the same analysis on banks that report Japanese GAAP or other types of GAAP.)