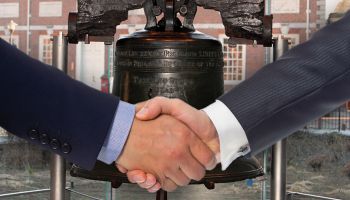 The series of M&A deals seen recently in the Philadelphia market might not be the start of a wave but rather the continuation of the theme of slow, steady consolidation that the region has experienced during the past few years.

Bryn Mawr Bank Corp., Univest Corp. of Pennsylvania, and National Penn Bancshares Inc. have all announced acquisitions within the past two months. The most recent deal was Souderton, Pa.-based Univest's pending acquisition of Philadelphia-based Valley Green Bank, which was announced June 18.

Activity, but not a wave

Univest Corp. President and CEO Jeffrey Schweitzer told SNL that although potential acquirers in the market have shown a disciplined approach to M&A, deals are happening. This is due to factors including boardroom fatigue and regulatory pressure. Additionally, Philadelphia is an overbanked market, and so opportunities for M&A are plentiful, he said.

David Danielson, head of investment banking at Ambassador Financial Group Inc., told SNL that Valley Green is one of the top-performing banks in the country. But he said the recent deals do not indicate the start of an M&A wave in the market.

"We're still seeing a low level of deal activity but it comes in bunches," Danielson said.

Danielson thinks there will be a steady number of banks sold in Philadelphia each year with no replacement banks entering the market. "So you're going to see a Philadelphia market that eventually gets rolled up," he said. "I think that's where the major metropolitan areas are heading."

And eventually the targets will grow bigger. Some of the smaller banks will either exit the market or—like Valley Green—grow at a fast rate. "The average size of a community bank is definitely increasing. At some point, I think you'll see the average size of the sellers has to move higher," Danielson said. 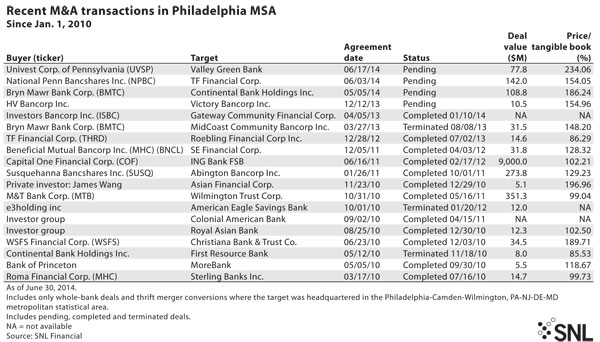 Joseph Matisoff, executive vice-president and chief credit officer at Marlton, N.J.-based Liberty Bell Bank, told SNL the regulatory environment has played a large role in recent M&A because of the cost of adding the required number of compliance-related staff. So he said scale becomes important in order for banks to reach a healthy level of profits.

But Matisoff said he still believes that a smallish bank can produce a decent amount of earnings if it is well-managed and pays attention to the basics of banking. He cited Valley Green as an example. "With excellent investor support they grew the bank and have shown healthy profits that got them the offer they couldn't refuse, I guess. That's what I'd have liked to do with Hyperion Bank, but that investor support just wasn't there," said Matisoff, who was CEO at Hyperion until December 2013.

Philly, the city of brotherly profit

Joel Naroff, the president of Holland, Pa.-based Naroff Economic Advisors, told SNL that Philadelphia is becoming a place to locate for younger professionals who, instead of leaving after attending school, are staying and starting businesses.

The city and the greater region is changing in that it is no longer a relatively sleepy, declining metro area, Naroff said.

"Comcast and a massive health care sector is finally coming together with the huge and high-quality university community to create more startups," he said. "That means more opportunities for investment." 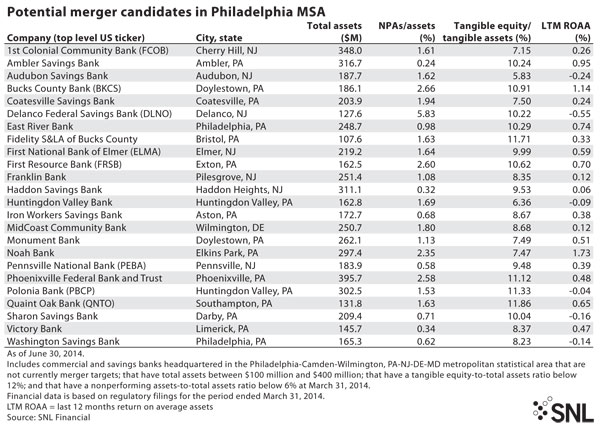 Danielson agreed, saying the Philadelphia economy has played a big role in the recent M&A—particularly in Valley Green's case. Univest was looking at the Philadelphia market as one it would pay a premium to get into, he said. Bryn Mawr, too, wanted to bolster its local presence.

"Philly has been coming back and making good progress, and I think that's why people are attracted to some of the banks that are closer in," he said.

Approximately half of the targets in the deals announced since 2010 were between $100 million and $400 million in assets and had tangible equity-to-total assets ratios below 12% and nonperforming assets-to-total assets ratios below 6%, an SNL analysis found. Looking at the Philadelphia metropolitan statistical area, SNL found 24 commercial and savings banks that met these criteria and are not currently a target in a merger.

Edward Losty, managing director and head of the financial institutions group at Mufson Howe Hunter and Co. LLC, told SNL in an earlier interview that Philadelphia is very competitive and is dominated by some of the largest banks in the country. Consolidation talks continue throughout the market as banks realize the need for scale, he said.

Also, banks in the market are realizing that it is difficult to grow their loan portfolios the way that they thought they could, and they are in many instances running in place, according to Danielson. So from a shareholder value point of view, bank boards that cannot make the case of increasing value have a hard time making the case not to sell out, he said.