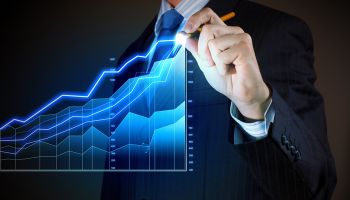 A majority of U.S. banks and thrifts experienced year-over-year earnings growth in the second quarter of 2014, based on data available as of July 30 from 81.45% of 442 companies traded on major exchanges.

Compared to year-ago numbers, earnings per share rose for 57% of those 360 banks, stayed the same for 5%, and fell for 38%. When compared to first-quarter figures, EPS grew for 63% of the banks, remained flat for 8%, and declined for 29%.

Some players up, some hit hard

Among the top 25 publicly traded banks and thrifts, 12 grew net income since the second quarter of 2013.

On the other hand, Citigroup Inc. experienced the biggest year-over-year decline in EPS among the 25 largest banks. The company posted net income of 3 cents per share, thanks to a $3.8 billion legal charge in connection to its $7 billion settlement with the U.S. Justice Department. Without the multibillion-dollar hit and a credit valuation adjustment/debt valuation adjustment, Citi would have posted net income of $1.24 per share, above analysts' consensus EPS estimate of $1.07.

People's United Financial Inc.'s bottom line was also impacted by a nonrecurring item during the quarter. The Bridgeport, Conn.-based thrift showed year-over-year EPS growth of 4 cents, or 20%, helped by a $21 million pretax gain from its joint venture with Vantiv Inc.

At Northern Trust Corp., pretax charges and write-offs of $42.3 million pushed net income down to 75 cents per share, even taking into account its zero provision for loan losses (compared to $3.0 million in the linked quarter and $5.0 million in the year-ago quarter). Without the nonrecurring items, net income would have totaled 87 cents per share.

Popular Inc. was the only bank among the top 25 to report a net loss in the second quarter.

The bank reported a net loss of $4.98 per share and recorded the repayment of $935 million of TARP funds and a noncash goodwill impairment charge of $186.5 million from the sale of Popular Community Bank's California, Illinois, and central Florida regional operations. Excluding these events, the Hato Rey, Puerto Rico-based company would have posted net income of 83 cents per share and exceeded analyst estimates of 70 cents per share. 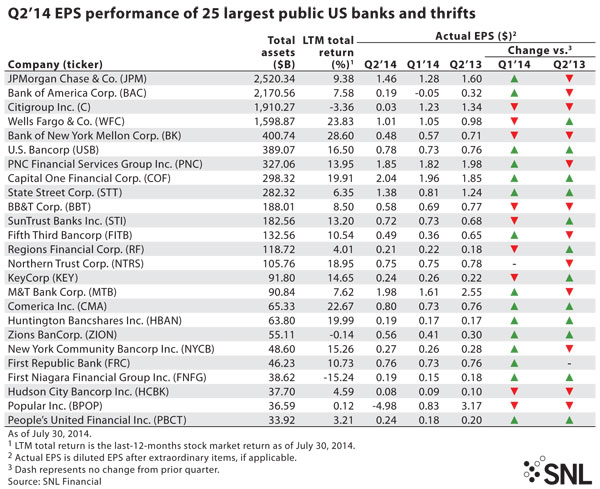 Among banks missing analyst expectations, BB&T Corp. posted net income available to common shareholders of 58 cents per share, 17 cents below consensus EPS estimates. BB&T was hit by after-tax adjustments of 12 cents per share in connection with potential exposure to Federal Housing Administration-losses from defaulted loans and an expected audit by the Department of Housing and Urban Development's Office of Inspector General.

As for Bank of America Corp., after posting a loss in the first quarter, it missed EPS estimates by 8 cents in the second and saw EPS fall by more than 40% from the year-ago period. On the other hand, JPMorgan Chase & Co. and Capital One Financial Corp. did better than analysts expected by 17 cents per share and by 22 cents per share, respectively. 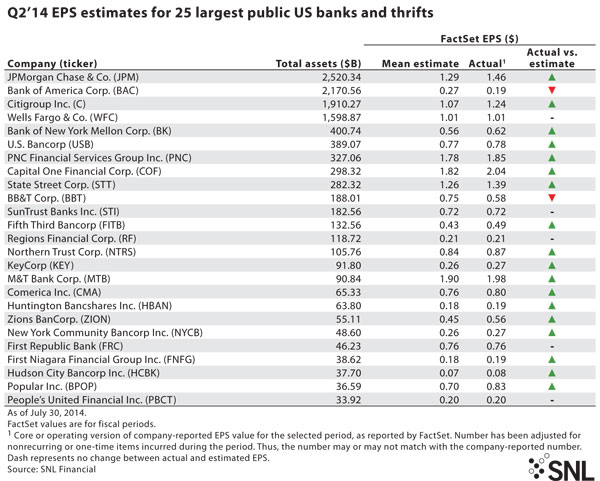 Net interest margin compression remained a concern for the industry during the quarter. For the 360 banks and thrifts included in SNL's analysis, there was no change in the median NIM from the prior quarter and an 82-basis-point decline from the year-ago period. The median provision for loan losses among the 360 banks decreased by 3.85% compared to the prior quarter and dropped 38.89% from the year-ago quarter. Some big banks, like Regions Financial Corp. and First Republic Bank, bucked this trend, raising provisions from the linked quarter and year-ago period. 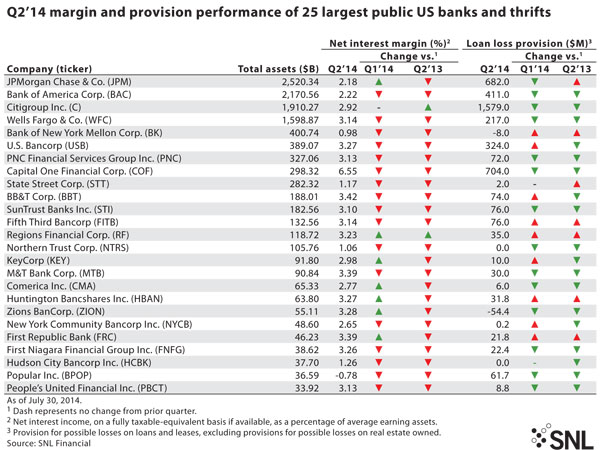 Many executives highlighted continuity in speaking about their companies' second-quarter figures.

Mortgage banking was still sluggish, asset management units continued to be profitable, and expenses remained under heavy scrutiny. Citi cut its headcount by 3,500 in the second quarter; Zions is planning to close and consolidate branches; and when an analyst asked Wells Fargo & Co.'s John Shrewsberry about the lack of improvement in its efficiency ratio, the CFO retorted, "Have you noticed that we're best in class at the ratio where we currently operate?"

Deposits continued to grow, and auto loan originations improved, especially for Wells Fargo, which recently overtook Ally Financial Inc. as the biggest auto lender in the U.S. Asked if the company might be taking an inappropriate risk in the segment, Chairman, President, and CEO John Stumpf said, "I think we're taking the right risk and we're finding the right place. After all, this is a business that we've been in a long time. We don't come in and show up and leave."

JPMorgan Chairman, President, and CEO Jamie Dimon assured analysts and investors that his cancer diagnosis would not impact the bank, and noted that succession plans have long been in place.

"I've been advised to take rest," the JPMorgan Chairman, President and CEO said. "That does not mean I won't work." 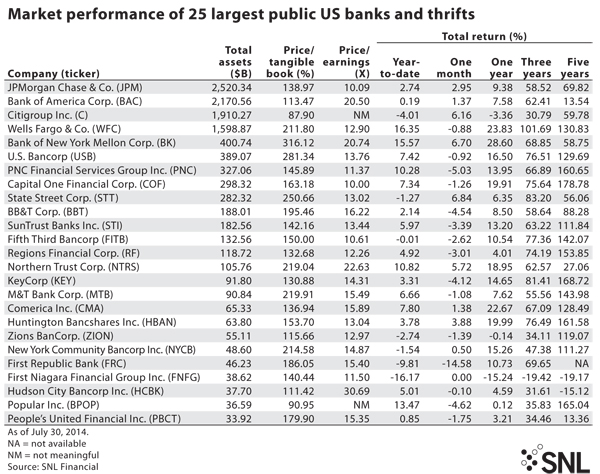