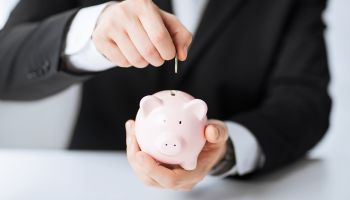 For a headline figure, aggregate loan loss reserves as a percentage of average total loans at U.S. commercial banks fell to 1.59% in the second quarter, down from 1.68% in the first quarter and 1.97% in the 2013 second quarter. The figure peaked at more than 3.5% in 2010 and has been steadily declining since, though it has some room to go before reaching pre-crisis levels of roughly 1.20%. 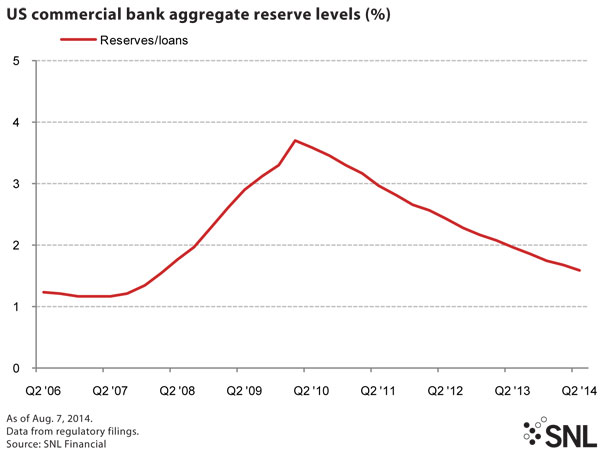 "Whether it's net problem assets, charge-offs, loan-loss reserves, they're all still 'yes, but' kinds of measures, which is that they're improving, but they're still not at where they were in 2007," Steven Reider, president of bank consulting firm Bancography, told SNL.

Net charge-offs are a bit closer to pre-crisis levels than aggregate loan loss reserves. As a portion of average loans over the course of the quarter, net charge-offs totaled 0.48% of loans in the second quarter, down from 0.52% in the first quarter and 0.73% in the 2013 second quarter.

Net charge-offs of roughly 0.50% of total average loans match 2007 levels, though that remains slightly elevated from the 0.38% rate reported in the 2006 second quarter.

Breaking down reserves and provisioning by banks, overall total loan loss reserves declined by more than $500 million for each of the four money-center banks: JPMorgan Chase & Co., Bank of America Corp., Citigroup Inc., and Wells Fargo & Co., with Citigroup's reserve tumbling by more than $1 billion in the second quarter. Relative to the prior-year period, total reserves at all four banks shrank by more than 15%. 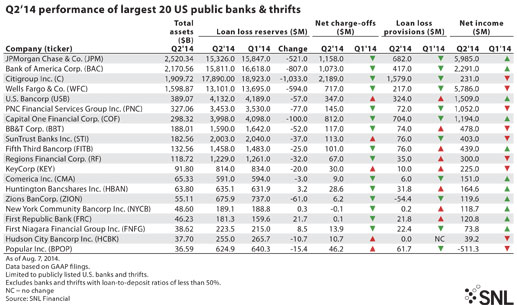 Among the top 20 largest banks and thrifts, all but two reported year-over-year declines in the loan loss reserves in the second quarter. The only two to post yearly increases both saw reserves increase by more than 20%—to $181.3 million at First Republic Bank, and to $223.5 million at First Niagara Financial Group Inc.

What big banks have been telling analysts

The situation was different for First Republic, which provisioned $21.8 million for loan losses in the second quarter, up from $7.1 million in the first quarter and $12.65 million in the 2013 second quarter. During the bank's July 16 conference call on second-quarter results, Michael Roffler, deputy CFO, said the provision was due to growth in loans outstanding, particularly business loans. He said the bank expects total loan loss reserve to range from 55 basis points to 60 basis points, with home loans carrying lower reserves and commercial loans requiring higher reserves.

During Zions' July 21 conference call on its second-quarter results, CFO Doyle Arnold said the bank expects loan loss provisioning to remain negative in the near-term and guided analysts to think of the first-quarter and second-quarter releases to represent the lower and upper limits, respectively, for future negative provisioning. 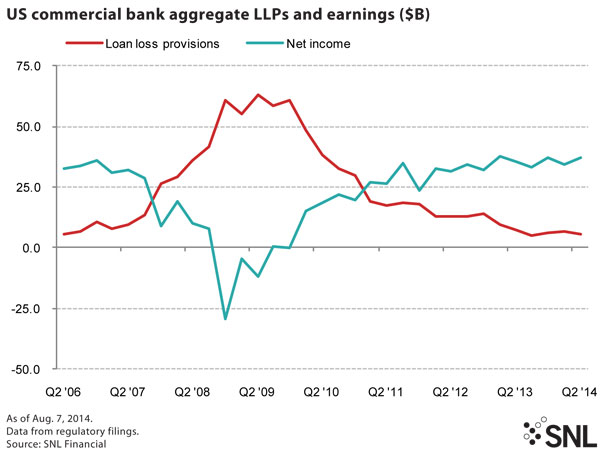 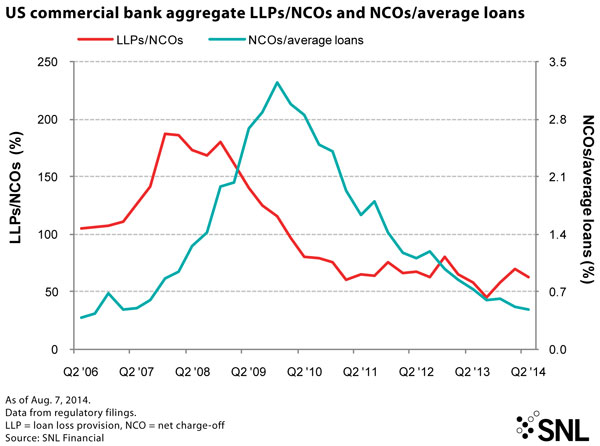