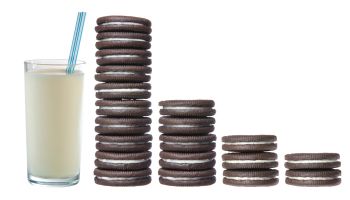 Other real estate owned balances—OREO— at U.S. banks continued to edge down during the second quarter, reaching their lowest levels in five years. 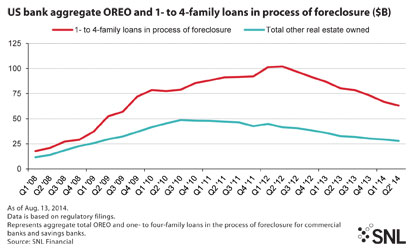 That total of OREO represented the lowest aggregate balances across the industry since the first quarter of 2009, when banks reported $25.66 billion in OREO, as incremental improvements in housing markets have helped banks bring down those totals.

"It hasn't been dramatic, but the improvement in property values has led to some accelerated activity," David Ruffin, a co-founder and managing member of Credit Risk Management, said.

Keith Mullen, a member of the firm Higier Allen & Lautin, argued that OREO balances have been somewhat slower to decline than after previous credit cycles. He said there were a number of factors contributing to the slower reductions, including a less vital recovery in some specific housing markets and the broader economy. The pressure that banks are facing from both new regulatory rules and an environment where controlling expenses is important are also limiting their ability to deal with the OREO they carry, according to Mullen, as they funnel resources elsewhere.

"Banks are keeping fewer bank professionals in their OREO group and including fewer of the legal staff—or deploying those people to other areas, such as the regulatory compliance side, because that's a huge growth area," Mullen told SNL. 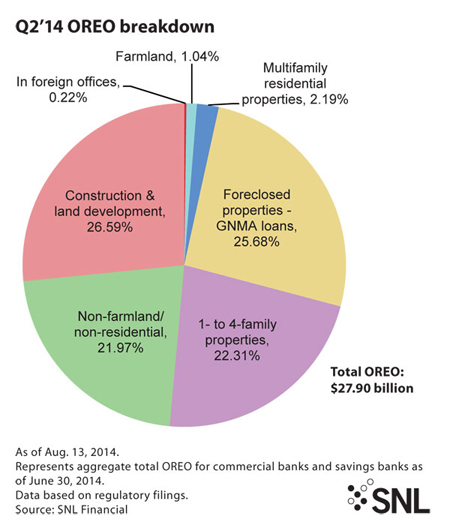 Construction and land development accounted for the largest share of OREO across the industry, with its total of $7.42 billion representing 26.59% of OREO balances at U.S. banks. One- to four-family properties represented 22.31% of all OREO at the end of the quarter, with banks reporting $6.22 billion at the quarter's end.

Another challenge for banks looking to dispense OREO assets is that potential buyers are aggressive when they know that properties are bank-owned. "That definitely stigmatizes [the asset]. … Buyers are going to value it differently," Mullen said.

Ruffin agreed, saying that "certainly it's difficult for many investors or buyers, because you have eclectic properties, and they all have different valuation issues." 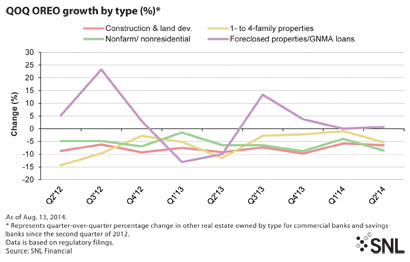 The industry's largest players continued to easily carry the largest total amounts of one- to four-family loans in the process of foreclosure, though each of the four largest banks in the U.S. reported declines in that number from their first quarter levels. 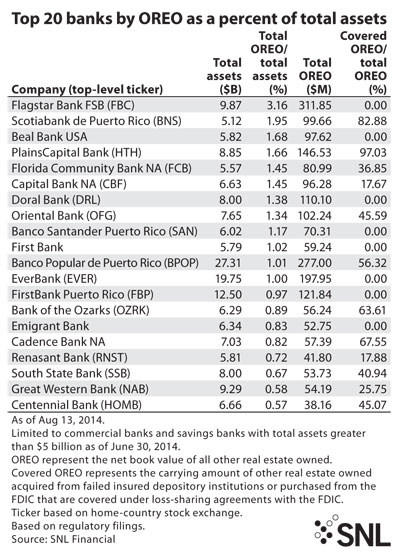 Flagstar Bancorp Inc. reported the largest amount of OREO as a percentage of total assets, at 3.16%, according to SNL's analysis. That was up from 3.03% at the end of the previous quarter and came despite an increase in the company's amount of total assets, as the company's aggregate amount of total OREO rose to $311.9 million during the period —an increase from a total balance of $289.8 million.

That put the company well ahead of the bank reporting the next-highest amount of OREO compared to total assets. Scotiabank de Puerto Rico reported total OREO of $99.7 million, or 1.95% of assets, at the end of the quarter, and Beal Bank USA had total OREO balances of $97.6 million, or about 1.68% of its total assets. Nearly 82.88% of Scotiabank's total OREO was covered by FDIC loss-share agreements, and a number of other banks reported that a large chunk of their OREO balance was associated with FDIC failed bank transactions.

PlainsCapital Bank, a unit of Hilltop Holdings Inc., said that 97.03% of its total OREO was covered by those agreements. Bank of the Ozarks, which was an aggressive acquirer of failed institutions throughout the credit cycle, said that 63.61% of its $56.2  million in total OREO is covered under its loss-share deals with the FDIC.