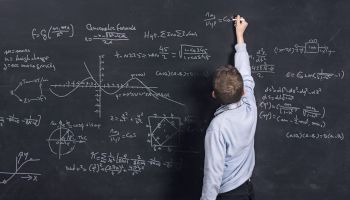 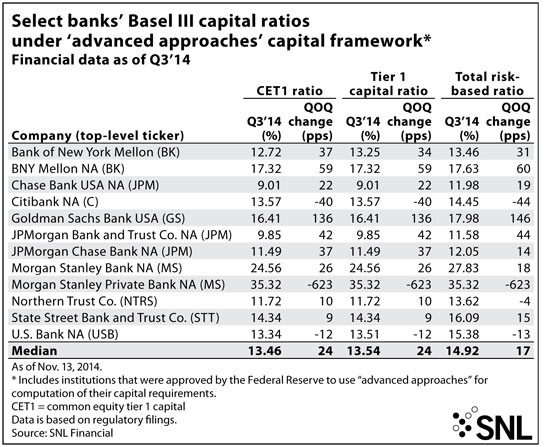 Starting this year, the regulatory capital schedule within call reports was broken out into parts I.A and I.B. Part I.A is reported under general risk-based rules, while the new part, I.B, is filled out using Basel III guidelines by "advanced approaches" institutions and any other institution that elects to use the "advanced approaches" for capital computations.

Under the recent changes to the call report's regulatory capital schedule, "advanced approaches" institutions filing the new portion of the schedule are required to compute CET1 capital after making some preliminary and threshold-based adjustments and deductions.

Under the preliminary adjustments and deductions, these banks make amendments to goodwill, intangible assets, significant investments in the capital of unconsolidated financial institutions in the form of common stock and other items.

These institutions are then required to make further adjustments depending on whether the mortgage servicing assets, certain deferred tax assets or significant investments in the capital of unconsolidated financial institutions exceed 10% of the Tier 1 deduction threshold. Those items subject to the 10% threshold also cannot collectively exceed 15% of CET1 capital at the institution, net of the preliminary adjustments and deductions. 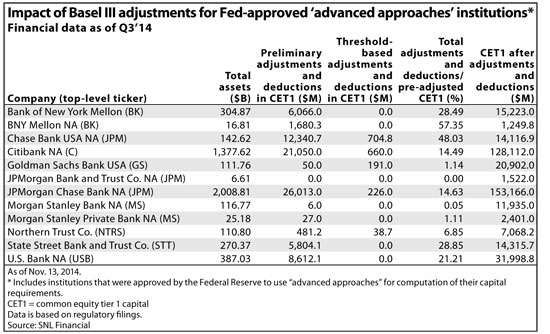 JPMorgan Chase Bank NA and Citibank NA were the only institutions to have CET1 capital adjusted downwards by over $20 billion in total preliminary and threshold-based adjustments and deductions. The two institutions had $26.24 billion and $21.71 billion in total adjustments and deductions, which amounted to 14.63% and 14.49% of the companies' pre-adjusted CET1 capital, respectively.

SNL also analyzed institutions with assets greater than $1 billion which started reporting the new regulatory capital schedule under the general Basel III guidelines in 2014. While the "advanced approaches" framework makes adjustments to both the numerator and denominator of the computed capital ratios, the general Basel III guidelines only adjust the numerator of the capital ratios based on Basel III rules.

For the 28 institutions with assets greater than $1 billion, including the 12 Fed-approved institutions, the median improvement in the three capital ratios—CET1, Tier 1 and total risk-based capital—was of 4, 5, and 1 basis point(s). On the flipside, the median leverage ratio for the group of 28 saw a decline of seven basis points under the general Basel III rules. Seventeen institutions saw improvements in their CET1 and Tier 1 capital ratios, while 14 saw an improvement in their total risk-based ratio. Only 11 institutions reported a healthier leverage at the end of the third quarter.

The below chart displays the capital ratios of all banks and thrifts with assets greater than $1 billion, that were either approved by the Fed to report capital ratios under the Basel III rules starting in the first quarter of 2014, or elected to do so. Capital ratios shown are under the general Basel III guidelines and not under the "advanced approaches" framework. 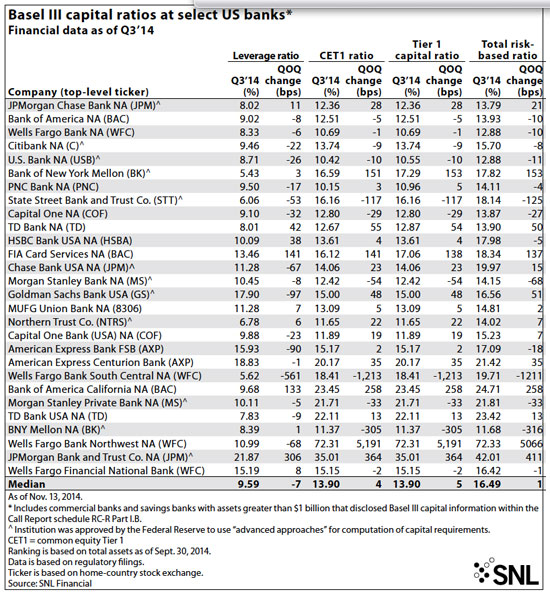