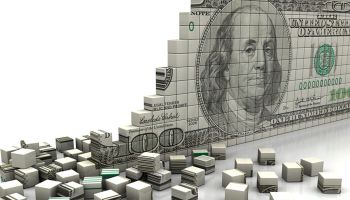 While some of the biggest investors in the largest U.S. banks have been maintaining exposure to the space, the latest regulatory call for the systemically important institutions to hold more capital shows just how confounding investing in the group can be.

The Federal Reserve proposed Dec. 9 a risk-based capital surcharge for systemically important bank holding companies and noted that JPMorgan Chase & Co. could face a shortfall. In the wake of the announcement, JPMorgan's stock price closed down 2.10% on Dec. 11 from its Dec. 9 closing price. During the same time span, all banks with more than $10 billion in assets were down 1.65% while the S&P 500 was down 1.19%.

Neuberger Berman LLC Chief Investment Officer Joseph Amato said the evolving regulatory regime is part of the reason that his company's portfolio managers are underweight on the large banks when it comes to long-term investing. Amato said it is difficult to project earnings for the large banks because the increasing of their capital levels or exiting of businesses affects returns on equity.

"Generally, we've been cautious," he said. 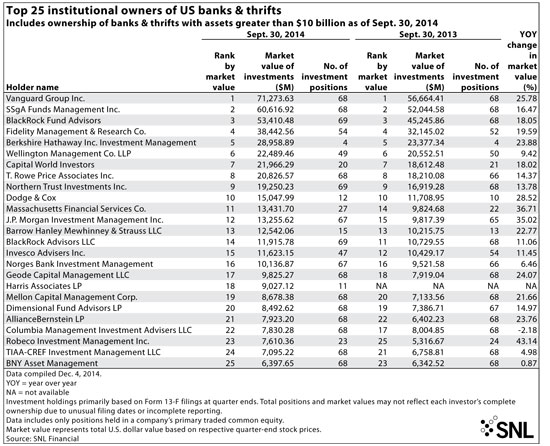 When to be in, when to be out

Indeed, at the end of the third quarter, Neuberger Berman did not appear among the top 25 largest institutional investors in U.S. banks and thrifts with more than $10 billion in assets, based on a review of Form 13-F filings with the SEC. But that's not to say the company has avoided banks completely. Neuberger Berman ranked as the 17th largest institutional investor in U.S. banks and thrifts with $1 billion to $10 billion in assets. 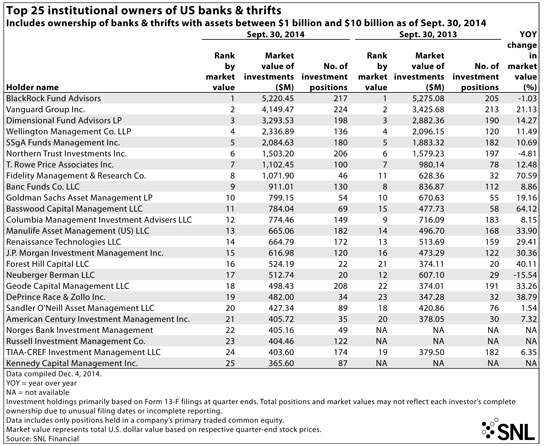 Amato also noted that the largest banks have provided some opportunities at times for his company's portfolio managers. "Lots of banks have been interesting trading vehicles over the course of the past two or three years because they tend to be a risk-on trade," he said. "Risk on, you buy the banks. Risk off, you're selling banks."

The increase in stock prices may have helped drive up the portfolio market value for the biggest investors in the large banks.

Based on market value of positions at the end of the third quarter, the three largest investors in U.S. banks and thrifts with more than $10 billion in assets were Vanguard Group Inc., SSgA Funds Management Inc., and BlackRock Fund Advisors. They saw year-over-year market value increases in those holdings of 25.78%, 16.47% and 18.05%, respectfully.

Of course, stock prices as well as position changes can affect market value. Going into the fourth quarter, Vanguard, SSgA, and BlackRock showed little sign of pulling back from most of their biggest positions in U.S. banks and thrifts with more than $10 billion in assets.

For example, during the third quarter, Vanguard increased each of its positions in its 10 largest holdings of U.S. banks and thrifts with more than $10 billion in assets. Among that group, Vanguard's largest year-over-year position increase was a 10.78% rise in BB&T Corp., and its largest quarter-over-quarter increase was a 3.4% increase in PNC Financial Services Group Inc. 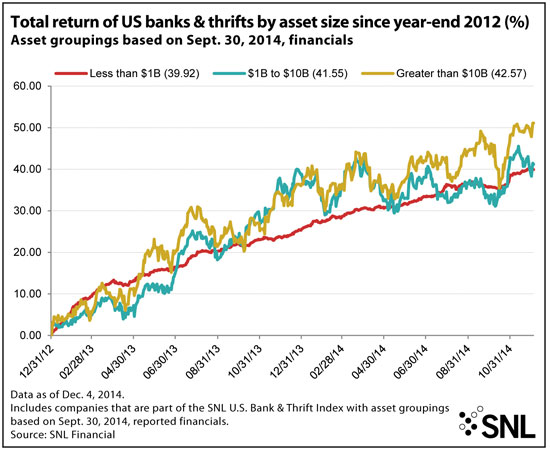 BlackRock Fund Advisors showed year-over-year and quarter-over-quarter increases in six of its 10 largest holdings of banks with more than $10 billion in assets, but the names weren't the same in each case.

Investing in the middle ground

As for investments in U.S. banks and thrifts with $1 billion to $10 billion in assets, BlackRock Fund Advisors was the largest institutional investor among those institutions at the end of the third quarter based on portfolio market value and increased its number of positions to 217 from 205 year over year. However, BlackRock's total market value from investments in the group dropped 1.03% during that span.

At the end of the third quarter, Wellington Management Co. LLP, the largest investor in banks with less than $1 billion in assets based on portfolio market value, increased its number of positions in those investments to 69 from 55 during the period, and the market value increased 44.80%. 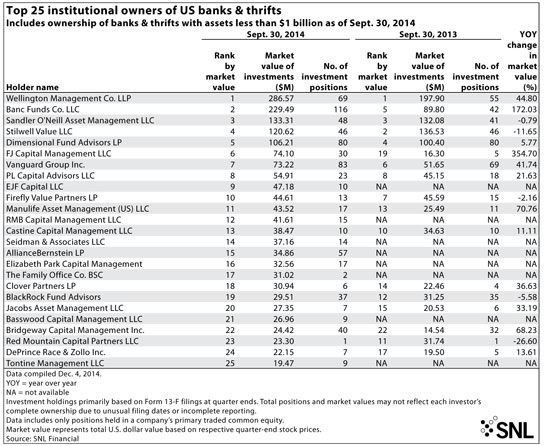 "While smaller banks had been somewhat behind their larger counterparts in realizing saves, it appears they too are reaching the end of the runway," the analysts said in the report.

However, when making decisions about bank-stock investments in 2015, Drexel Hamilton LLC analyst David Hilder said three of the biggest issues are "the Fed, the Fed, and the Fed."

In a Dec. 8 report, Hilder said investor decisions about bank-stock positions could be driven largely by judgments about interest-rate increases, higher equity and debt capital requirements for the largest U.S. banks, and, perhaps, even the prospect of distancing the Fed from bank regulation.

"We expect that a great deal of investors' conversation about banks in 2015 will revolve around the Fed, both as the governing authority for monetary policy in the U.S. and now the most powerful regulator of the nation's largest banks," Hilder said in the report.