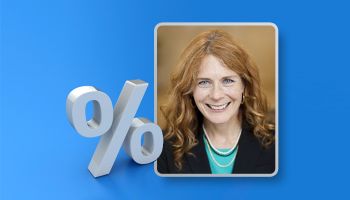 Back in the mid-1980s Sara Walker faced a generation gap. Walker’s father-in-law had a 6% mortgage. She and her husband, meanwhile, had a 13.74% mortgage—“and I was a bank employee with a special rate,” Walker recalls, the high rate burned into her memory.

Walker says she used to wistfully wonder if the couple would ever see a mortgage rate of their own as low as 6%. Try getting a millennial to understand what life was like back then, when mortgage rates have been so low for so long, and refinancing has been so common.

“All that many people today know is a falling rate environment,” says Walker. “I’m hopeful that young people don’t get to know the high-rate environment that I personally experienced.”

Walker wears two hats at $26.6 billion-assets Associated Bank, N.A., Green Bay, Wis. She is the bank’s chief economist, and, as she likes to say, her day job is senior vice-president and investment officer at Associated Wealth Management.

Working that combination of jobs gives Walker the opportunity to not only absorb and process a huge amount of arcane financial data, but to hear across her desk—and from the bank’s lenders and others—the views of real people.

As the likelihood that the Fed will raise rates sometime this year looms, she has gathered impressions of what people hope for.

Walker says many people have grown exasperated with the pitiful returns they receive on deposits. “They will be looking for rates to start rising on savings accounts,” she says, “and I don’t think there is as much loyalty as there used to be.”

Bankers, she says, have come to realize that inertia is their friend, when it comes to deposits. And people won’t move for a few basis points. “When rates are so low that they are close to 0%,” she says, “they are zero.” She anticipates that once rates begin to rise, consumers will migrate in search of satisfaction of their pent-up demand for a decent return. In some markets banks seeking additional retail funding have started paying up for deposits.

Business accounts, tied to a bank by much more than a single deposit relationship, won’t be so apt to walk, she continues. But banks can expect some itchiness. The recession taught American business a renewed cost consciousness and efficiency, Walker believes, and “they’ve become more attuned to profitability. They want the best deal.”

She says businesses will want higher rates, but beyond that, they will expect better payoffs on the quasi-interest that businesses at many banks receive on analyzed account relationships. As rates rise, they will demand higher earnings credits, which are typically applied to banking fees and related costs.

“When I talk to our lenders, they tell me that the environment out there is brutally competitive,” says Walker. This will pressure banks to meet such demands.

More than ever, banks and their customers face an environment that is uncertain—yet full of data and information to be processed. “People are trying to decode Janet Yellen’s messages,” says Walker, “but they are also cognizant that the whole environment is more challenging.”

Indeed, reflecting on today’s “open” Fed versus the closed-mouth Fed of decades past, Walker observes that Fed-watching remains an active sport. For all the information the Fed and the Federal Open Market Committee puts out, she says, much effort still goes into sussing out what the Fed is actually up to.

Chairman Yellen herself remains a contradiction in industry opinion. Walker says she’s heard Yellen described as “a collaborator to the extreme”—but she has also heard the economist described as “independent minded.”

For banks themselves, Walker suspects that expectations for a rising rate environment will prove out differently than traditional thinking anticipates.

One factor is that markets now tend to react to the news about an upcoming event moreso than to the actual event. Back in May 2014, for example, when the Fed announced that the final round of Quantitative Easing would end that September, the markets reacted to the news more strongly than the event later on. “When it happened, it was no big deal,” Walker explains.

A constant in its influence has been the impact of the yield curve, simultaneously a reflection of Fed activity but also a monitor of the markets’ outlook and expectations.

Who will be favored, the asset-sensitive bank or the liability-sensitive bank? “I’ve been wrestling with that,” says Walker. “We see the curve flattening a bit. That doesn’t help banks, in general terms.” A fall in long-term rates would typically favor the asset-sensitive, she says, but some institutions have investment holdings that must be marked to market.

“It’s a lot less clear than it used to be,” says Walker.

Rising short-term rates, in a time of a flattening yield curve, may have a quicker impact on banks’ deposit costs than on their returns on assets. Walker thinks some institutions may wind up getting squeezed at both ends.

She says there’s also the unknown of what the Fed will do later in its efforts to prevent inflation from picking up speed. And something of a wild card, in terms of the ultimate impact on banks, is the increased ability to sell loans—moving a rate-sensitive asset off the books if need be.

“I would say that right now things are as unclear as ever,” Walker says.

“In general,” she says, “banks remain conservatively run. The regulators in many respects are insuring that. I think they [banks and regulators] are reading from the same page. For banks, there isn’t much reward for being on a different page.”