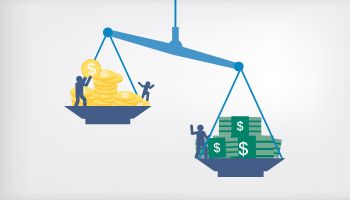 U.S. banks' and thrifts' deposit costs were exceptionally low in the first quarter of 2015, a reflection of the prolonged low-interest rate environment.

The cost of savings accounts—and deposits in general—remained near historic lows during the first three months of the year, an SNL analysis found, essentially mirroring the quarterly findings going back to the immediate aftermath of the 2008 financial crisis.

The cost of savings accounts, including money market demand accounts, hovered near zero in the first quarter, as they did throughout the previous year, SNL data shows.

Federal Reserve policymakers moved swiftly amid the fallout from the crisis to push down rates, and they have kept downward pressure in place ever since, allowing many banks to amass deposits without having to pay customers anything close to a premium.

Waiting for Fed to reverse direction

The question that now looms large is, when will the Federal Open Market Committee, the monetary policy board at the U.S. central bank, begin to ease up and allow short-term interest rates to climb? [Read the cover story from the May 2015 Banking Exchange magazine, “Waiting for the Fed”]

The minutes from the FOMC's April meeting, its most recent, indicate that a majority of policymakers are eyeing a potential rate hike this year but probably not June 16-17, when the committee next meets.

Though possible, the Fed said in the minutes, a June move was not probable because recent economic data likely would not "provide sufficient confirmation that the conditions for raising the target range for the federal funds rate had been satisfied." 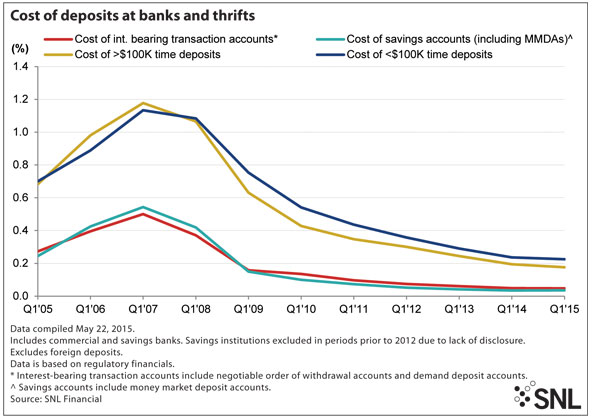 While jobs data has been mostly favorable this year—total nonfarm payroll employment increased by 223,000 jobs in April, the U.S. Labor Department reported recently—FOMC members continue to worry about lackluster inflation data. Inflation continues to fall short of the Fed's 2% target.

Is the turn coming this fall?

All of that noted, banker Chris Nichols told SNL that he thinks the economy is gathering momentum and is likely to produce solid overall growth during the summer months, providing FOMC members the ammunition they need to begin gradually raising rates following their September meeting.

"Some of the data has been more benign than I think actual overall economic performance," said Nichols, chief strategy officer at CenterState Bank of Florida NA, a unit of Davenport, Fla.-based CenterState Banks Inc.

He also said many of his bank's commercial clients seem to be anticipating a Fed rate hike, as they are increasingly looking to lock in fixed-rate loans. That's helping the bank produce loan growth this year.

"And it's another indication that people are expecting higher rates," Nichols said.

Others are not so sure. Jack Ablin, chief investment officer at BMO Private Bank, pointed out that, while the typical American has saved substantially on lower gasoline prices, that development has yet to translate into greater retail spending.

Citing AAA Travel estimates, Ablin said in an email that American drivers saved as much as $75 billion at the pump in 2014 alone, yet those savings were not put back into retail sales during the first quarter of 2015, as many had anticipated would happen. Sales at U.S. retailers dipped 0.2% in the first quarter, Ablin noted, citing federal data. The U.S. Commerce Department said April retail sales were flat.

"The pickup in jobs combined with a broad-based decline in energy prices should have painted a pleasant backdrop for retailers," Ablin said. "American consumers need a catalyst for an attitude adjustment, and we don't see any trigger for that on the horizon." 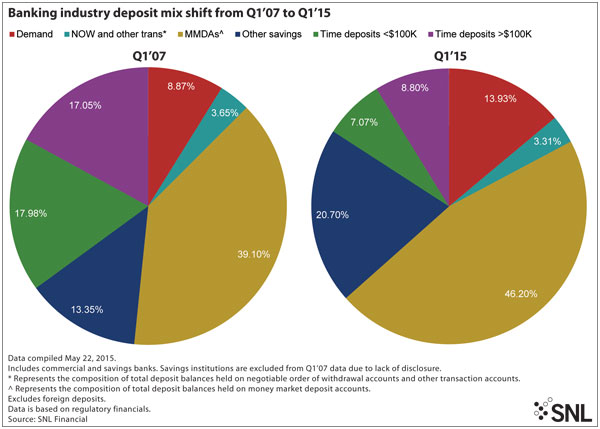 Nevertheless, Ablin has joined others in saying that while the timing is difficult to predict, a rate hike at some point in coming quarters is almost inevitable, as the economic recovery in the U.S., while choppy, continues. If not in September, most observers say, the Fed will likely move by early 2016 at the latest.

That, Nichols of CenterState said, means banks must be bracing now for at least a gradual shift in their deposit mixes.

With rates ultra-low for several years, many depositors have kept their money in flexible money market demand accounts. MMDAs accounted for 46.2% of U.S. deposits in the first quarter, up from 39.1% in the first quarter of 2007, prior to the financial crisis, according to the SNL analysis.

Nichols—and most bankers who have spoken to SNL in recent months, for that matter—anticipates that when rates do rise, depositors will look to shift more of their money into less flexible but higher-paying accounts.

With competition for loans fierce, deposits will become increasingly valuable to fund lending, analysts say. As such, it will be interesting to see which banks can adjust the most seamlessly to higher deposit costs, maintaining ample funding and strong positioning to vie for prized credits, as analyst Brad Milsaps of Sandler O'Neill & Partners recently put it to SNL.

"Competition just continues to be intense," he said. "So, everybody is watching very closely to see what happens with rates and they are trying to be sure they are ready to make adjustments." 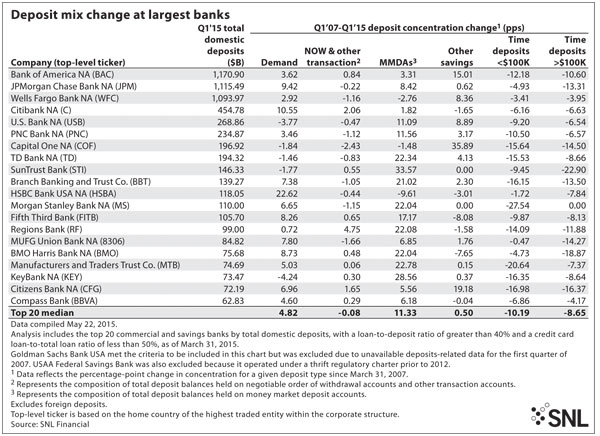