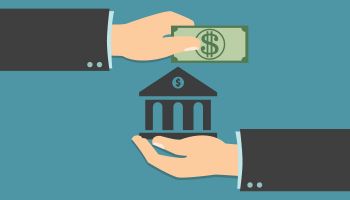 While banks with strong core deposit franchises have long earned the highest multiples when selling, a number of strong asset generators and in particular, those with scale, have fetched high valuations in recent years.

Bank acquirers have often assigned higher value to franchises that are "loaned up," boasting loan-to-deposit ratios and net interest margins that stand above industry averages. Size also continues to matter a great deal when it comes to pricing acquisitions, with larger targets selling at higher prices than their smaller counterparts.

The trend witnessed in recent years is not that surprising given just how much many banks have struggled to grow their loan portfolios. Many acquirers still prize low-cost deposits when pursuing deals and there is no doubt that core-funded franchises will continue to receive high price tags, particularly if interest rates moved materially higher from current levels. Deposit premiums in recent years, however, have been far lower than witnessed before the downturn in 2008.

The median core deposit premium in bank deals announced this year has been 5.70%, which is slightly higher than the 4.97% median reported in 2014 and the 3.43% median in 2013. However, those premiums are far lower than the prices buyers paid in bank deals between 2004 and 2007, when the median core deposit premium was 16.31%, according to SNL data. 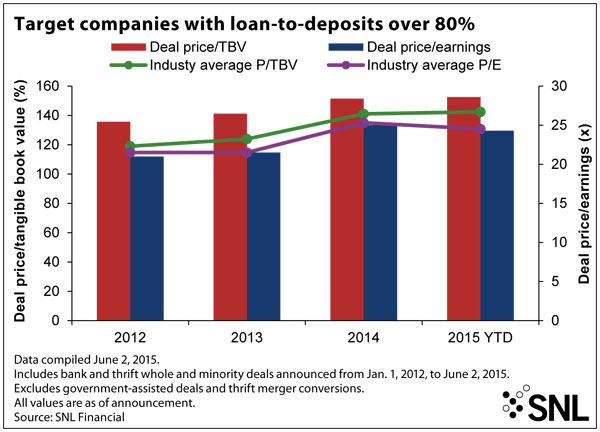 Bank acquirers seem to be more focused on finding franchises that have posted strong loan growth since deposits have been plentiful in the years following the credit crisis. Through the first quarter of 2015, SNL data shows that the banking industry has grown deposits by 33.2% since year-end 2008, while growing loans by just 6.3%, leaving many institutions flush with excess liquidity and thus more reliant on securities for income. Banks that have managed to buck that trend and have maintained higher loan balances have received higher takeout values. 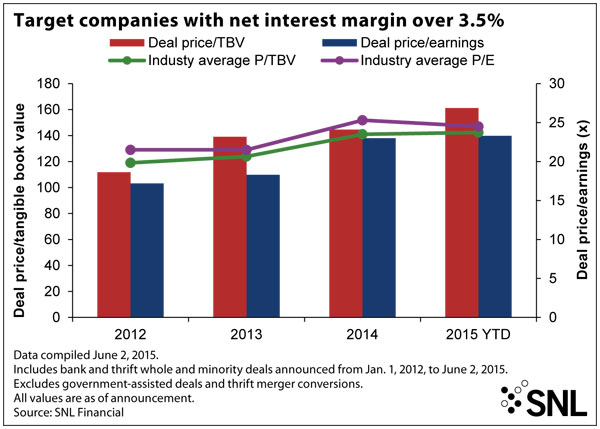 The higher prices paid for institutions that were more "loaned up" has extended even beyond the top 20 most expensive deals. SNL found that sellers in 2015 that had a loan-to-deposit ratio in excess of 80% at the time of the announcement received higher offers, when valuing the transaction on price-to-tangible book value from 2012 to 2014. The gap in valuations has ceased to exist this year, at least when valuing deals on tangible book value, but targets with loan-to-deposit ratios above 80% have continued to receive higher takeout offers when valuing the transactions on earnings.

Those targets likely have stronger earnings streams and higher net interest margins given that they have put more funds to work in their loan portfolios opposed to their security portfolios, which carry far lower yields, particularly in recent years when long-term interest rates have fallen to historical lows. SNL data shows that loan yields have been more than 2x higher than securities yields since 2012 across the banking industry, including at banks with less than $1 billion, which represent the bulk of sellers.

Banks have shown a willingness to pay higher prices, in terms of price-to-tangible book value, for sellers that have boasted higher NIMs. Sellers with NIMs in excess of 3.5%—well above the industry's aggregate margin in recent years—have received higher price-to-tangible book multiples since 2013. However, the takeout values for those targets have come with lower earnings multiples than in other transactions.

Buying into expectations, too

The prospect of continued growth has garnered higher offers from buyers as well. Six of the highest-priced deals since 2012 in terms of price-to-tangible book value have come from Texas, which proved to be one of the strongest growth markets, if not the strongest, in the country in the years that followed the downturn. However, most of those transactions came before oil prices plunged in the fall of 2014 and early part of 2015, and bankers have acknowledged that the sharp decline in oil prices has clouded the M&A outlook in Texas, at least for now. 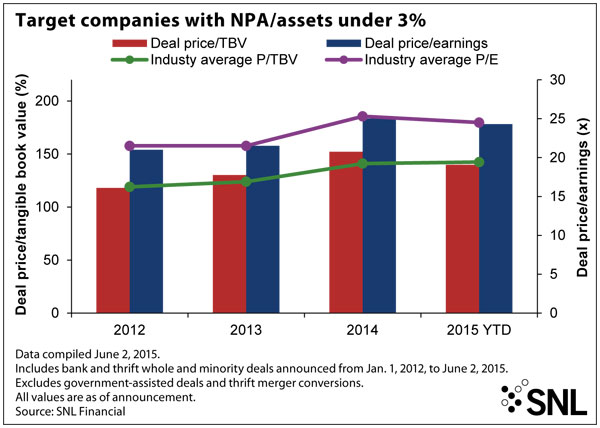 Buyers' opinions of institutions still reeling from credit problems and larger institutions has not changed, though. Acquirers continue to place higher values on banks with cleaner credit quality and have shown an even greater willingness to pay up for scale. Buyers have assigned scarcity value to larger institutions, with six of the top 10 most expensive deals announced since 2012, in terms of price-to-tangible book value, involving a target with more than $1 billion in assets.

SNL found that targets with assets over $1 billion received higher offers from acquirers since 2012. SNL data shows that those banks have sold for an average price-to-tangible book value of 204.3% this year, compared to 142.4% among all transactions. The discrepancy in offers for larger sellers has grown in 2015, even though four of the eight targets with more than $1 billion in assets reported returns on average equity below 7.5%. The industry, in aggregate, reported an ROAE of 9.01% at the end of the first quarter.

Larger sellers likely will continue to receive great interest from banks on the prowl for acquisitions since they will significantly move the needle for any buyer. Chemical Financial Corp. noted when announcing its purchase of Lake Michigan Financial—one of the top 20 most expensive deals since 2012, based on price-to-tangible book value—that the pricing on the transaction was "full," but represented a "capstone move" for the bank, given that it allowed the bank to rapidly gain market share.

"It will enhance our positioning as the community bank for Michigan. It will move us into a leadership position in western Michigan, and it will cement our position as a leader in the Grand Rapids and Traverse City MSAs," Chemical Chairman, President and CEO David Ramaker said on a conference call to discuss the transaction, according to the transcript. 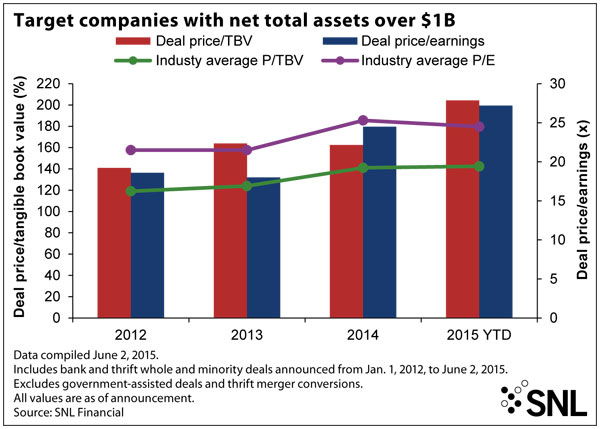