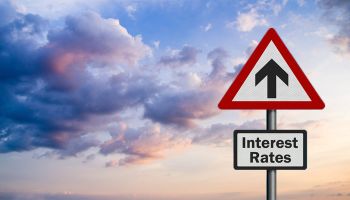 Deposit costs for U.S. banks and thrifts continued to hover around historic lows in the second quarter of 2015, extending a long run that dates to the aftermath of the 2008 financial crisis.

Federal Reserve policymakers cut interest rates following the crisis in order to stimulate borrowing and boost economic activity. But in doing so, they also drove down funding costs, and with the Fed holding fast to its low-rate policy ever since, banks have had to pay little to customers for their deposits.

Against that backdrop, many depositors shifted their money into flexible money market deposit accounts. MMDAs accounted for 45.94% of U.S. deposits in the second quarter, up from 39.47% in the second quarter of 2007, prior to the financial crisis, according to the SNL analysis.

While the low deposit costs have helped keep expenses in check for banks, the low-rate environment ultimately has proven a net negative for many lenders, as profitability on loans, the lifeblood for most banks, swooned amid the Fed-imposed environment. Many banks' net interest margins have contracted for years.

That explains why the banking sector is eagerly awaiting a rate hike from Fed policymakers, perhaps as soon as their next meeting later this month. 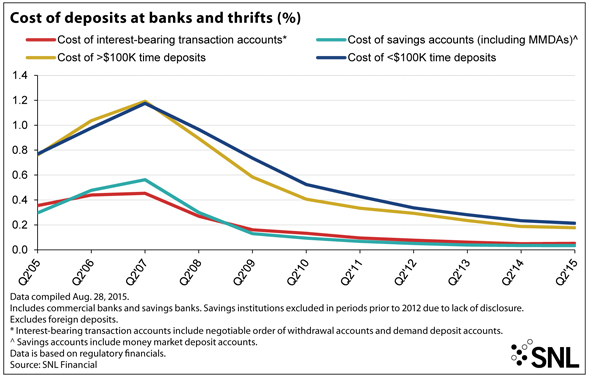 A Fed move to raise short-term rates from around zero would, in the view of many central bank observers, mark the first of several bumps over an extended period aimed at returning to a more normal rate environment. That would mean higher funding costs, but historically banks have been able to boost rates on loans faster than on deposits, bolstering their margins and resulting in a net gain, says economist Ken Mayland.

In a higher rate environment many bank customers will undoubtedly move their money out of MMDAs and into less flexible but higher-paying accounts. As they do this, some are likely to shop around for the best deals, infusing a new level of competition for deposits. But Mayland notes that most banks are currently flush with deposits and could manage competition for deposits if they are enjoying greater lending profitability.

Mayland also noted that the banking system as a whole is heavy on cash. Extra cash on banks' balance sheets functions as a buffer against the possibility of a liquidity shortage. The Fed, he said, gives banks a credit for maintaining this type of buffer, and when the central bank does move to raise rates, that credit will increase as well, providing banks an interest income boost.

"So that's another reason banks will do well with higher rates," Mayland said. 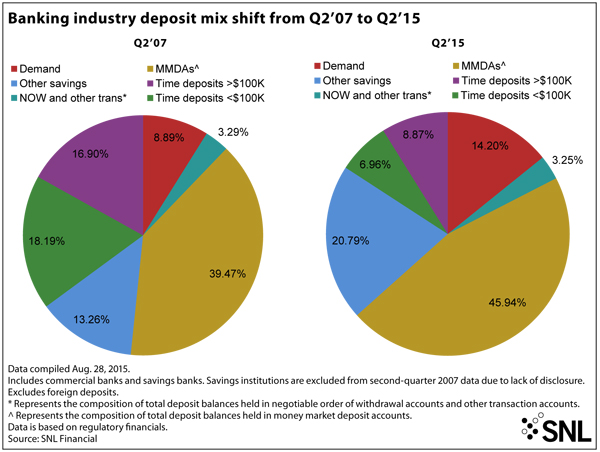 All of that noted, the big question now is, will the Fed act in September or not?

For much of the summer, expectations had been building for a rate increase this month. But, in late August, concerns mounted about economic doldrums in China and general global vulnerability. This resulted in a big injection of volatility into U.S. stock markets, and that in turn raised new doubts that the Fed would begin to raise rates.

Federal Reserve Vice-Chairman Stanley Fischer, speaking at the Federal Reserve Bank of Kansas City's recent annual retreat in Jackson Hole, Wyo., suggested that a September rate hike is still on the table. But Fed officials did not deliver clear signals on whether that is likely to happen or not.

Policymakers have in recent days reiterated their long-cited mantra that any rate move is data dependent. Noting that, Mayland said that the last major piece of data expected before Fed policymakers next meet is the August federal jobs report, slated for release Sept. 4.

Employers added 215,000 jobs in July, and Mayland expects that the August figure will be similarly strong. "So I think they should do it in September," he said of a rate hike. "Why string the uncertainty out for another couple months."

He said the Fed is widely expected to lift rates by 25 basis points at first, a modest move that should allow borrowers, depositors and banks to adjust without having to make sudden or major changes. 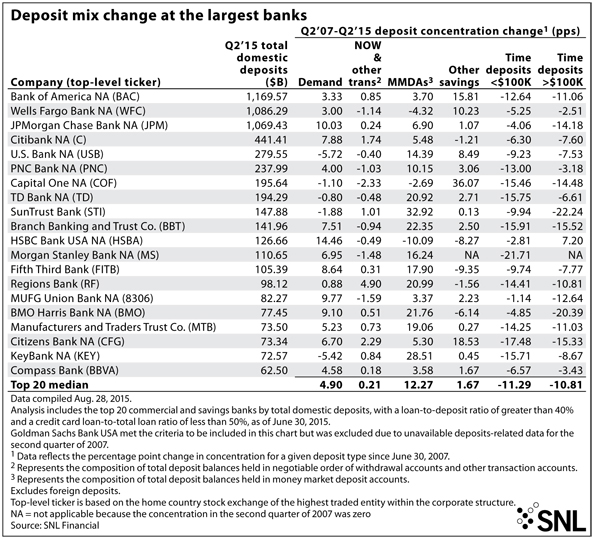 Mayland, however, noted that he and countless other central bank observers have, on and off, been anticipating a rate hike for years, and the Fed has yet to act. "I thought they should have made a move two years ago," he said, "so who really knows?"

Michael Swanson, a Wells Fargo & Co. economist, agreed. He told SNL that while Fed policymakers say their decisions on rates are data dependent, the thresholds on key data measurements, including unemployment levels, have changed at various points as anticipation gathered for a rate hike.

"Given the way the Fed operates these days, you might be just as well off rolling the dice as asking me" for a professional prediction, Swanson said.

But he agreed with Mayland that a 25 basis-point increase is almost certain to be the Fed's first step when it does move on rates, and that should not shock depositors or borrowers, he said.

At the same time, most banks will benefit from higher rates, as their margins tend to expand. "So yes, the banks will like it," he said.