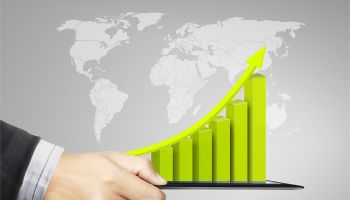 Basel III implementation pushed more banks into the undercapitalized ranks, but a few institutions were able to improve their financial position in the second quarter and back away from the abyss.

The number of undercapitalized institutions dipped slightly in the second quarter to 20 banks and thrifts from 21, based on the criteria of having a common equity Tier 1 ratio below 4.5%. But, many undercapitalized institutions reported notable improvement in their capital positions in the period, which marked the second quarter that banks and thrifts had to implement the Basel III rules.

The Basel III rules changed the components and risk weightings of regulatory capital and include some new and existing deductions from common equity that impact the numerator of the common equity Tier 1 ratio. Banks had to make preliminary adjustments to their capital ratios in the first quarter and then phase-in the remaining adjustments over the next few years.

The adjustments are based on the levels of goodwill, intangible assets, and significant investments in the capital of unconsolidated financial institutions in the form of common stock and other items. And the rules require banks to make further adjustments if mortgage servicing assets, certain deferred tax assets, or the aforementioned investments in financial institutions exceed 10% of the Tier 1 deduction threshold. The rules also state that those items cannot collectively exceed 15% of common equity Tier 1 capital at the institution, net of the preliminary adjustments and deductions.

With the changes in the rules, more institutions are falling into undercapitalized territory, at least when compared to the previous risk-based capital rules. Under the prior rules, 13 banks were undercapitalized at the end of the fourth quarter, based on the criteria of having Tier 1 ratios below 4%. The number of undercapitalized institutions has nearly doubled since the implementation of Basel III.

The greater emphasis on common equity, capital deductions, and more stringent risk-weightings has driven the increase in undercapitalized institutions. For instance, SNL recently found that the adjustments and deductions associated with the Basel III rules reduced the industry's preliminary common equity Tier 1 capital by 17.76% in the second quarter.

The Basel III rules also changed the prompt corrective framework, now defining critically undercapitalized institutions as those with a tangible equity-to-total assets ratio less than or equal to 2%. Ninety days after an institution becomes critically undercapitalized, regulators are required to place the institution into receivership or take other action they believe will best serve the prompt corrective action, which could include selling the bank to another institution.

Some banks that become undercapitalized are still unable to find a lifeline of capital or a merger partner and eventually end in failure. 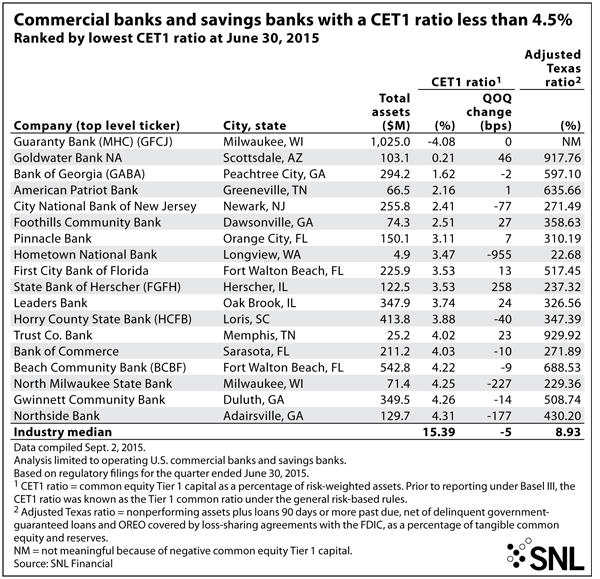 Basel III by the numbers

Failures were the main contributor to the decrease in undercapitalized institutions in prior years, primarily in 2011 and 2012. The trend was consistent through those two years, when 143 banks failed and 36 banks found their way out of trouble through recapitalizations, mergers or balance sheet shrinkage and de-risking, coupled with modest earnings in some cases.

The pace of failures was even slower in 2014, producing just 18 failures for the year—the lowest level since before the credit crisis. Six banks have failed in 2015, but just two of those failures have come since the first quarter ended.

Other banks previously deemed undercapitalized at the end of the first quarter found their way out of trouble through means other than failing. CertusBank NA escaped undercapitalized territory after agreeing to sell the majority of its banking operations. CertusBank agreed in early June to sell its deposits, certain loans, and branches in South Carolina, Georgia, and Florida through four transactions. CertusBank also said it would close its Columbia, Charleston, and downtown Greenville branches in South Carolina, and its Ponte Vedra, Fla., branch.

Nantahala Bank & Trust Co. returned to profitability in a big way in the second quarter, reporting $443,000 in net income, compared to a $149,000 net loss in the prior quarter. The resurgence in earnings in part came as the bank recognized more than $160,000 in gains on the sales of loans and other real estate owned in the period, according to its second-quarter call report. The bank also shrunk its balance sheet in the period, helping boost its capital ratios further.

State Bank of Herscher, meanwhile, remained in undercapitalized territory, but built its common equity Tier 1 ratio to 3.53% from 0.95% at the end of the first quarter. The Illinois-based bank recently sold to Rockford, Ill.-based Foresight Financial Group Inc. on July 2.

When excluding banks that have failed or merged since the end of the second quarter, SNL data shows that, as of Sept. 2, 18 banks were undercapitalized based on June 30 data.

Capital levels improve for most

Those banks are exceptions rather than the rule as the banking industry has rebounded dramatically since the height of the credit crisis. Banks have built their capital levels considerably in recent years and their credit quality has improved to levels not seen since well before the credit crisis. For instance, SNL data show that nonaccruals to loans have fallen to 1.05% at the end of the second quarter, the lowest level witnessed since 2007.

Given such improvement, the number of banks on the FDIC's "problem list" has declined notably. The problem bank list fell to 228 institutions at the end of the second quarter from 253 institutions in the first quarter and 354 a year earlier—a 9.9% drop from the linked quarter and down 35.6% from the year prior.

By the end of the second quarter, problem banks' assets had fallen to $56.5 billion from $60.3 billion and $86.7 billion in the fourth quarter. The number of institutions on the FDIC's problem list has declined for 17 straight quarters.

This article originally appeared on SNL Financial’s website under the title, "A few banks inch their way out of undercapitalized territory" 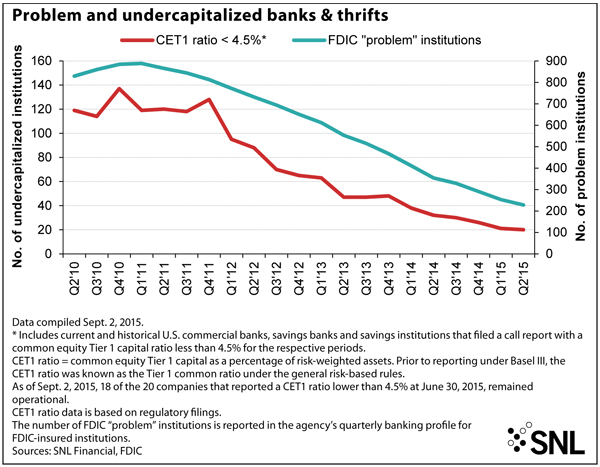