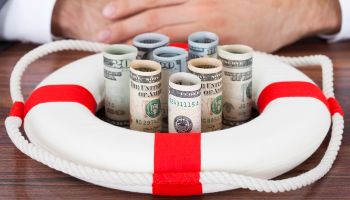 As banks wait for interest rates to move higher, they continue to protect significant amounts of their securities portfolios from swings in the market.

Facing the prospect of rising rates and new capital and liquidity standards, banks have placed large amounts of securities in held-to-maturity (HTM) portfolios. Unlike available-for-sale (AFS) portfolios, banks are not required to make mark-to-market adjustments to their HTM buckets on a quarterly basis.

Those mark-to-market adjustments in AFS portfolios flow through accumulated other comprehensive income (AOCI) and impact tangible common equity. Banks have sought to mitigate the impact of changes in market valuations on their book values by relying on their HTM portfolios more and more. HTM portfolios represented 20.7% of all securities at the end of the second quarter, up from 17.5% a year ago, according to SNL data.

Déjà vu in the portfolio

The Federal Reserve began raising short-term rates in June 2004, increasing the target fed funds rate by 225 basis points between Jan. 1, 2004, and June 30, 2005. The yield on the benchmark 10-year Treasury, however, actually declined during that period, falling 22 basis points. 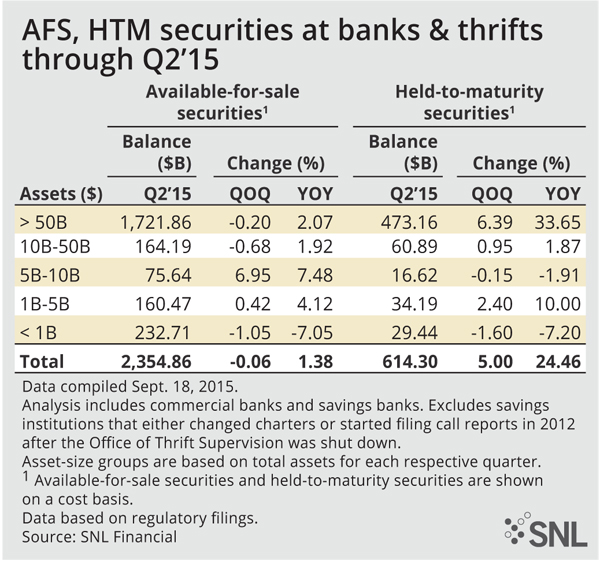 Bankers are waiting for another change in the rate cycle in the not-too-distant future. Many economists still expect both short-term and long-term rates to begin increasing soon, with the Federal Reserve taking action to lift the fed funds rate off historical lows later this year and continue moving the key rate higher in 2016. Economists also expect the yield on the 10-year Treasury to increase over the next year.

Eyeing that prospect, banks have steadily built their HTM portfolios, but they have also responded to regulations passed in the aftermath of the crisis. For instance, the originally proposed Basel III rules required AOCI to flow through regulatory capital at all banks. Institutions have ramped up transfers of securities to HTM portfolios significantly since the provision was first proposed in the summer of 2012. Since the second quarter of 2012, HTM portfolios have risen by $396.27 billion, or 181.7%, according to SNL data. AFS portfolios, meanwhile, have actually declined by $55.84 billion, or 2.3%, during the same period.

The final Basel III rules, however, allowed non-advanced approach institutions, generally those with less than $250 billion in assets, to opt out of the rule that causes AOCI to flow through regulatory capital. Because many of the nation's largest banks were required to opt in to the AOCI rule, they have led the way in building in their HTM portfolios.

Protecting securities from moving underwater in a rising rate environment has become even more important in a post-liquidity-coverage-ratio world. The liquidity coverage ratio (LCR) applies to banks above $50 billion in assets and requires covered institutions to hold "high quality liquid assets" greater than, or equal to, their projected cash outflows minus their inflows during a 30-calendar-day stressed scenario. Many HQLAs are rate-sensitive assets such as U.S. Treasurys and likely would come under pressure when interest rates rise. 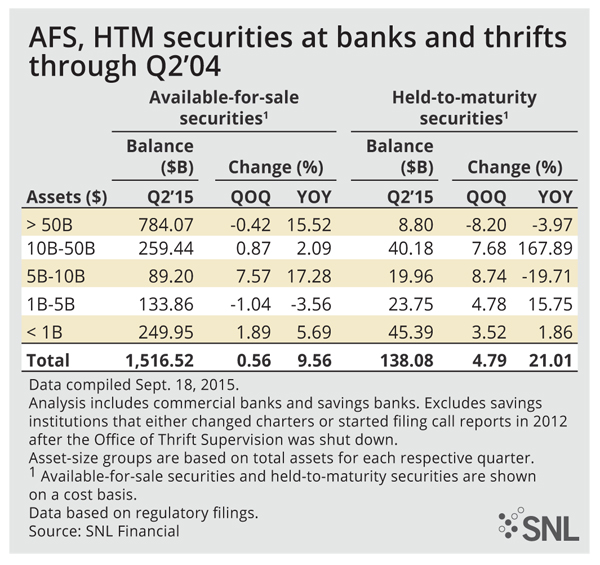 Those institutions—JPMorgan Chase & Co., Bank of America Corp., Citigroup Inc., Wells Fargo & Co., Goldman Sachs Group Inc., Morgan Stanley, U.S. Bancorp, PNC Financial Services Group Inc., Capital One Financial Corp., HSBC North America Holdings Inc., and TD Bank US Holding Co.—increased their HTM portfolios in the second quarter by a median of 5.0% from the prior quarter and grew those portfolios by nearly 25% from a year earlier, according to SNL data.

Nuances of the strategy

Banks can sacrifice liquidity some when placing securities in their HTM portfolios because they are usually committing to hold those assets until they mature, even if they will carry lower, relative yields when interest rates rise. Transfers of securities from HTM portfolios into available for sale can occur, though the move brings limitations.

For instance, in the second quarter, Hudson City Bancorp Inc. transferred securities classified as held to maturity with a carrying value of $1.22 billion to available for sale, resulting in unrealized gains of $48.3 million. The company had sought to recognize gains in its securities portfolio to supplement earnings, which have been hindered by severe pressure on its net interest margin.

Hudson City also noted when reporting second-quarter results that it continued to carry excess liquidity and had "very little appetite for reinvesting this liquidity into longer-term investments or fixed-rate residential mortgage loans."

As a result of transfer in the second quarter, Hudson City said it is precluded from classifying any future security purchases as held to maturity for a period of two years.

If rates do rise soon, as many banks hope they will, the opportunity to transfer securities from HTM portfolios into available for sale and realize a gain in the process could diminish as higher rates likely will put pressure on many bonds. Many banks are using their HTM portfolios now to protect against that risk. 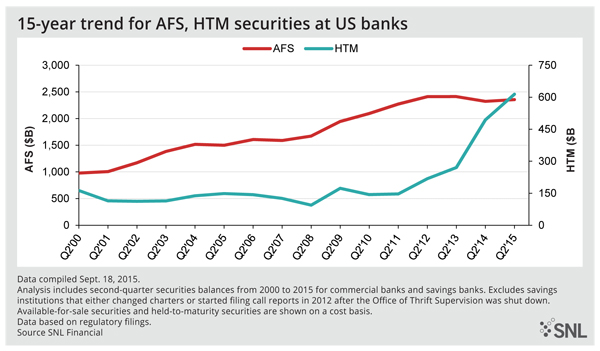 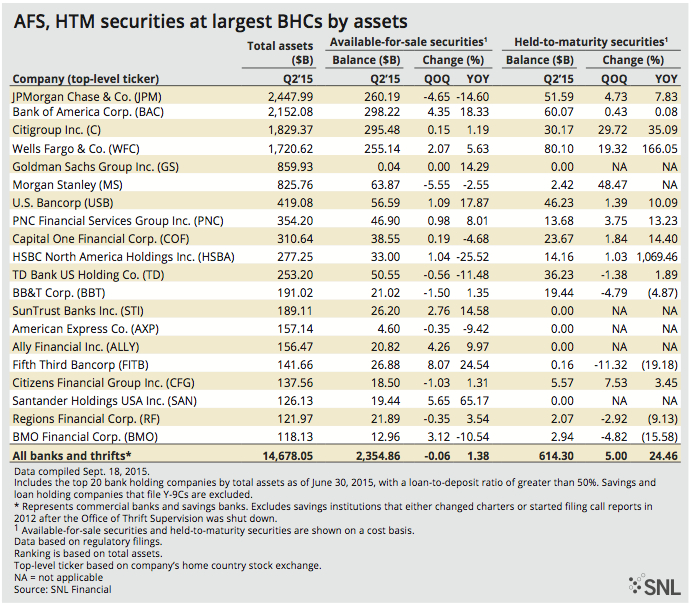 This article originally appeared on SNL Financial’s website under the title, “In shades of the past, banks build HTM portfolios before rate cycle turns”