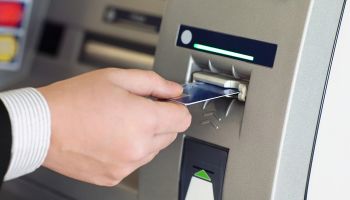 Bank industry deposits continued to climb during the 12 months ended June 30, but a looming interest rate hike could hamper that trend.

The FDIC's annual Summary of Deposits included data from July 1, 2014, through June 30, 2015. Deposits grew substantially during that period, rising to nearly $10.66 trillion from about $10.11 trillion a year earlier.

But many industry observers expect interest rates to finally begin to rise at the end of 2015. Keefe Bruyette & Woods is forecasting the first rate hike in December with a gradual increase through 2016. Thirteen participants in the most recent FOMC meeting believe the first increase in the target range for the federal funds rate should be in 2015, while three said 2016 is the more appropriate time.

What’s around the corner?

The long-awaited rate increase will likely lead to a slowdown in the pace of deposit growth but not cause significant contraction—at least not in the short term, according to Keefe Bruyette & Woods analyst Damon DelMonte. He told SNL there is a lot of excess liquidity on balance sheets, and the expectation of "lower rates for longer" is likely to keep deposits at banks.

As rates rise, banks are likely to see increased competition on products such as CDs. "I think you may have some aggressive pricing by internet-based banks," DelMonte said.

On the retail side, there will likely be some shifting between deposit types as customers become more sensitive to rates. But there is unlikely to be a large outflow headed into the stock market or other places. "Banks will try to protect the deposits that they have, and they may end up having to pay up a little bit in rates," DelMonte said. 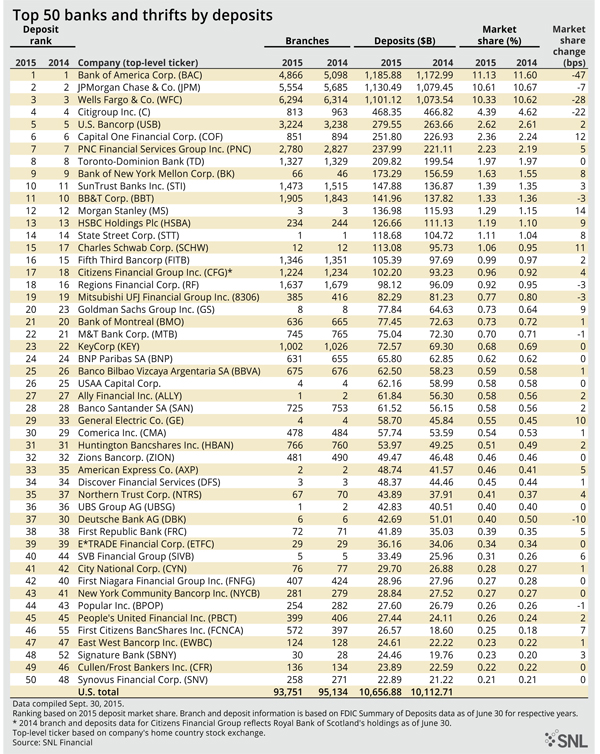 Trends among the largest

Bank of America again had the most deposits in the nation, at $1.186 trillion. JPMorgan Chase & Co.'s deposits climbed to $1.130 trillion and Wells Fargo's totaled $1.101 trillion.

Speaking during a recent conference, Wells Fargo CFO John Shrewsberry said deposit growth has remained strong during the past five years. Average deposits were up 8% in the second quarter, and the bank managed to reduce average deposit costs to 8 basis points, which was 2 basis points lower compared to a year ago and down 20 basis points from five years ago. Shrewsberry said the deposit growth reflects Wells Fargo's success in growing checking accounts as primary consumer accounts were up 5.6% from a year earlier.

Stephens Inc. analyst Matt Olney said that a move in rates could impact the growth in deposits that sprung up in the low interest rate environment.

Olney said savings accounts in particular could be vulnerable in a higher rate environment as depositors seek better rates elsewhere. 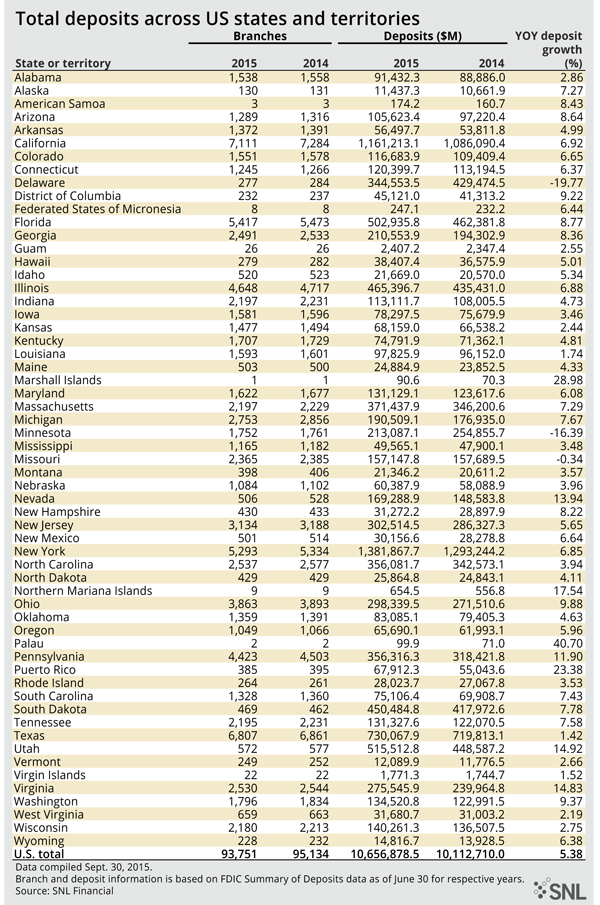 Broken down by geography, 47 out of 50 states posted year-over-year gains in total deposits. The data also highlighted the continued shrinking of banks' branch networks. There were 93,751 U.S. branches at June 30, down from 95,134 a year earlier; these numbers have been adjusted to incorporate SNL data on banks that do not file SOD data.

But DelMonte noted that branches will always have some place in the U.S. banking landscape. He said the decline in branches will be an ongoing process as banks move more into mobile and online offerings while also looking to address their expense structures.

Great Southern already had several branches in the St. Louis market, and the deal will double its deposit market share there. Fifth Third, meanwhile, is pulling its retail operations out of the market while keeping the commercial lenders in place. "So you can make the argument for each company as to why they are doing it," DelMonte said. "Some people are going to want to get rid of branches and others will be there to take them off their hands."

Olney said the overall industry branch count will continue to decline but added that some banks are hesitant to get overly aggressive with branch closures due to the looming rate hike. "These bank CEOs have long memories of higher rates and how important these deposits are with higher rates," he said. 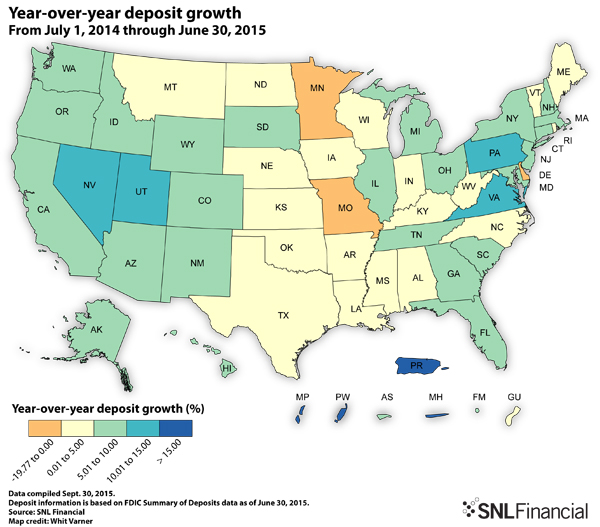 This article originally appeared on SNL Financial’s website under the title, “SOD report shows deposits growing, but rate hike could play a role in 2016.”