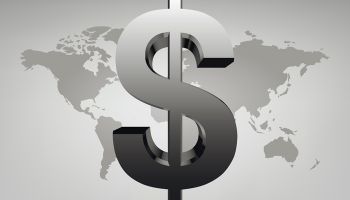 In the third quarter of 2015, superregional U.S. banks—those with $50 billion to $500 billion in assets and with noninterest income comprising less than 75% of operating revenue for the period covered—experienced median topline growth of 4.40% year over year, which is the highest percentage increase since the fourth quarter of 2012. An SNL study of 14 superregionals showed that all grew operating revenue in the recent quarter, led by Fifth Third Bancorp and First Republic Bank, by 13.66% and 12.38%, respectively.

For many of the 14, the key was growing net interest income from a bigger balance sheet. DBRS' John Mackerey and Mark Nolan noted that the third quarter saw more loan growth among regionals than generally expected, though mortgage banking pulled noninterest income lower for many banks. Net loans for the 14 increased 5.78% on a median basis relative to the year-ago data, and up 112 basis points sequentially.

First Republic's loan base expanded 15.5% on a year-over-year basis. Originations, at $4.9 billion, were up 2.5% over the third quarter of 2014. But mortgages sold brought in $3.0 million, down from $13.7 million a year ago. Rafferty Capital Markets' Dick Bove notes "the company's core business [of jumbo mortgages] is under "significant competitive attack" from larger banks" but that First Republic is doing "an excellent job" of addressing the issue through product expansion and higher revenue to offset costs.

Elevated noninterest expenses, however, impeded the conversion of First Republic's topline growth into earnings growth. EPS was 82 cents, four cents down from the third quarter of 2014. The company, only about $5 billion over the $50 billion asset threshold, has attributed a significant amount of its nearly 16% year-over-year expense increase to addressing the accompanying regulatory requirements.

In contrast, Fifth Third's year-over-year earnings growth of 15.38% more than matched its growth in operating revenue. The bank upped its loan portfolio 3.85%, but margin compression kept a lid on net interest income. The majority of the $194.0 million revenue increase was from a positive valuation adjustment on a Vantiv warrant. Also notable was the fluctuation in mortgage banking income, which was down 39% on a linked-quarter basis but up 16% compared to the prior year.

Fifth Third's earnings included a $35 million pretax provision expense from the restructuring of a student loan-backed credit extended in 2007. Evercore's John Pancari remarks it's "the first sizable credit hit taken by a regional bank to exposure not in the energy space." During the earnings call, Fifth Third President Gregory Carmichael clarified it was "not the type of credit we would underwrite today." 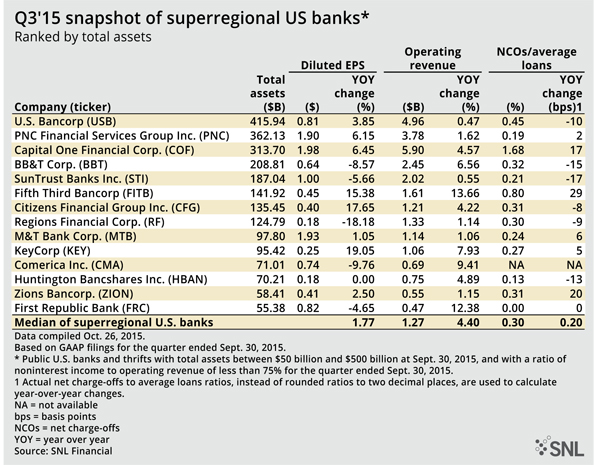 Credit quality trends were mixed for the superregionals. At Fifth Third, net charge-offs spiked more than 63% from the year-ago quarter, while Huntington Bancshares Inc. cut its net charge-offs-to-average loans ratio by half to 0.13%. The net charge-off rate also fell at SunTrust Banks Inc. (by 17 basis points to 0.21%) and at BB&T Corp. (to 0.32% from 0.48%). Mackerey and Nolan noted that asset quality is "probably not going to get much better," and that, while portfolio deterioration might happen down the road, it hasn't yet.

But pricing weakness in the energy sector could kick off the next downturn in the credit cycle. Regions Financial Corp. expects losses from energy customers to be as high as $50 million. It experienced an 18.18% year-over-year dip in EPS, as tepid revenue growth was overwhelmed by loan loss provisions more than doubling and noninterest expenses rising by 9.16%.

Criticized energy loans crept up at Dallas-based Comerica Inc. Pancari commented that the energy issues again overshadowed the bank's results, while Bove said, "The bank has faced periods like this in its past and emerged reasonably unscathed."

Pittsburgh-based PNC Financial Services Group Inc. also has significant energy exposure—approximately $2.6 billion in outstandings as of Sept. 30. Another challenge at PNC is its persistently falling net interest margin. It was 2.70% in the third quarter, representing the 11th consecutive quarterly decline. Oppenheimer's Ben Chittenden said the bank's "earnings profile is stuck on a "treadmill" until rates rise. CEO Bill Demchak expressed his "disappointment" at the delay—"a more dour view of the future than I have ever heard him state before," Bove wrote, adding that Demchak's emphasis on the importance of rate adjustments implies "the company [does] not have as much "control of its destiny" [as] one would like."

At the other end of the spectrum, Capital One Financial Corp. was the lone superregional to experience year-over-year margin expansion. Its card-driven NIM was up four basis points to 6.73%. The median margin compression for the 14 banks was nine basis points.

Only eight of the superregionals improved EPS on a year-over-year basis. In addition to Fifth Third, the double-digit EPS gainers were Citizens Financial Group Inc. and KeyCorp. Fueled by above-median loan growth and the absence of nonrecurring expenses, Citizens grew earnings 17.65%. And KeyCorp, like its peers, grew loans amid a falling net interest margin, but the bank bucked the industry trend with a substantial portion of its 19.05% EPS growth coming from higher noninterest income.

An earnings wrap of superregionals cannot close without a mention of U.S. Bancorp, the largest of the group. It reported net income of 81 cents per share, on what Raymond James' David Long described as a "solid" quarter for the bank. He added that while "revenue growth profile remains slightly below peers, profitability metrics should remain best-in-class." U.S. Bancorp has also said it might resume considering whole-bank M&A in 2017. 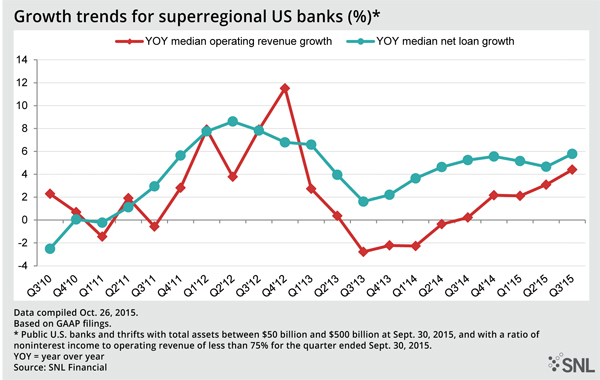