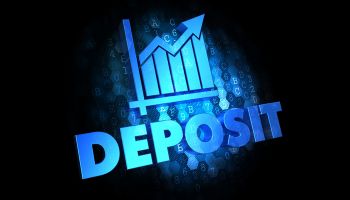 Deposit growth for community banks and thrifts in the Northeast has recently been strong, with some bankers saying the key to their success has been garnering deposits from the businesses in their markets.

Deposits for public banks and thrifts in the Northeast grew 8.12%, annualized, at the end of the third quarter, on a linked-quarter basis, and 6.22% over the year prior.

Experiences here and there

Belmont, Mass.-based BSB Bancorp Inc. grew deposits 20.46% quarter over quarter, but President and CEO Robert Mahoney joked that the secret to having high-percentage growth is to start from a small base.

"If we were a $10 billion bank this would be a yawn," Mahoney said. BSB's deposit growth has consistently held 20%-25% annual growth over the past several quarters, according to the executive. Mahoney told SNL the bank is fast-growing, well-capitalized and operating in a strong economy. BSB has a targeted deposit strategy with consumers in four distinct industries, which Mahoney declined to divulge. 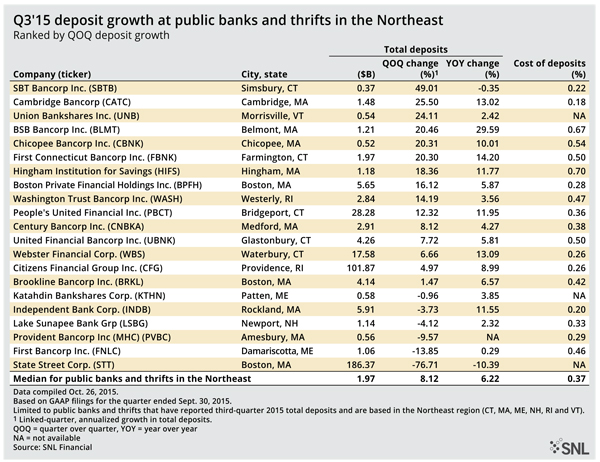 SBT Bancorp Inc. experienced a 49.01% in deposits from the second quarter of 2015 to the third. President and CEO Martin Geitz told SNL the Simsbury, Conn.-based bank is experiencing solid business deposit growth as it strengthens its commercial banking relationships.  Also, the bank benefited in the third quarter from its municipal business, he said.

But Geitz said that competition is definitely increasing as a number of banks are offering $100 cash incentives to open checking accounts. "A couple are offering money market and CD teaser rates for as long as one year," he said. "It's not yet widespread, but a trend is developing."

Mahoney said competition for deposits in BSB's markets is "very benign" because the money-center banks that operate in the region can get funds in a variety of ways, and so they do not have to price up consumer deposits to fund their balance sheets. He called the bank's deposit-gathering markets "attractive" due to the concentration of large banks that have not been experiencing strong loan growth.

Mahoney believes that an interest rate increase is coming, but he said it will likely be modest, so there will be further, gradual margin compression.

The bank opened three new branches in the first 18 months after it went public, but today the economics for new branches is tough. "You'll never get your money back," Mahoney said. That causes banks to look at deposits that are large and not active, which means business and municipal deposits. "Because you just can't afford the costs with rates so small," he said.

Farmington, Conn.-based First Connecticut Bancorp Inc. saw a 20.30% quarter-over-quarter increase in deposits in the third quarter of 2015. Chairman, President and CEO John Patrick Jr. told SNL the bank is pleased with the initial feedback and reception that it has received in the western Massachusetts marketplace, especially in terms of deposits. The bank recently opened its first branch in the market with a second branch scheduled to open within the next month. He said competition for deposits across the bank's footprint is primarily coming from other community banks.

Patrick also said there is not much room to drive the cost of deposits any lower.

Mahoney said cost of funds has slowly but surely been coming down for the bank, but with checking accounts not as profitable as they used to be there is little incentive to pay "carrot" rates on CDs to attract them. Still, there is a little room for funding costs to drop, although Mahoney said the bank has to be careful with asset-liability management.

Consumers are unimpressed with premium pricing at the moment on the deposits side, so the bank has backed off of that strategy. "We're drifting (costs of deposits) slowly down but there's not much further you can go," he said.

Middletown, Conn.-based Liberty Bank President and CEO Chandler Howard told SNL real estate continues to strengthen as evidenced by an increase in home sales and median prices in most of the Northeast states. Across most of the region, leasing demand for both office and industrial space has also improved.

Liberty Bank, which is not a public company, has experienced "sizeable" loan growth during the past several years and has chosen to fund a portion of those loans with inexpensive advances from the Federal Home Loan Bank, Howard said. "While we are comfortable with our current loan-to-deposit ratio, over the longer-term Liberty Bank will look to replace a portion of these Federal Home Loan Bank advances with market deposits," he said.

Loan-to-deposit ratios were highest in the Northeast region at 95.70% at June 30, an SNL analysis of the community banking space found. The next highest was the Mid-Atlantic region at 86.52%, while the Southwest was the lowest at 71.75%. Banks in the Northeast region also saw the biggest uptick from the second quarter of 2014 to the most recent reporting period going from 92.68% a year ago to 95.70% at June 30.

This article originally appeared on SNL Financial’s website under the title, "Deposit growth continues to be strong across the Northeast"