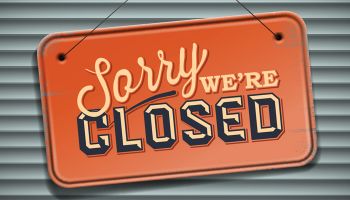 Bank of America Corp. downsized its branch network by a net 39 locations during the third quarter, making it among the most active on that front as it continued an ongoing effort to sell off some stores and shutter others in order to bring down costs and focus ever-greater attention on serving customers via digital avenues.

"We continue to experience shifts in consumer activity away from branches towards self-service options," CFO Paul Donofrio said during BofA's third-quarter earnings call.

He said customers increasingly are doing more business online, at ATMs and, most notably, via their mobile devices. And that, he said, is win-win because it costs BofA less to meet its customers where more of them now want to do their banking.

Donofrio's assessment goes a long way toward explaining why bank branch counts have steadily declined for the past six years. Foot traffic at banks has plummeted as more Americans grow accustomed to handling routine business of all stripes online and by using mobile applications, analysts say. At the same time, lending profitability has been under pressure amid the drawn-out low interest rate environment, motivating banks to contain costs by minimizing their physical footprints.

"So it's logical that banks would continue to pare down the branch networks," Mark Fitzgibbon, head of research at Sandler O'Neill & Partners LP, told SNL.

Activity in the third quarter amplified the trend. Banks in the U.S. reduced the country's cumulative branch network by 598 locations during the quarter—more than in any of the three previous quarters, an SNL analysis found. 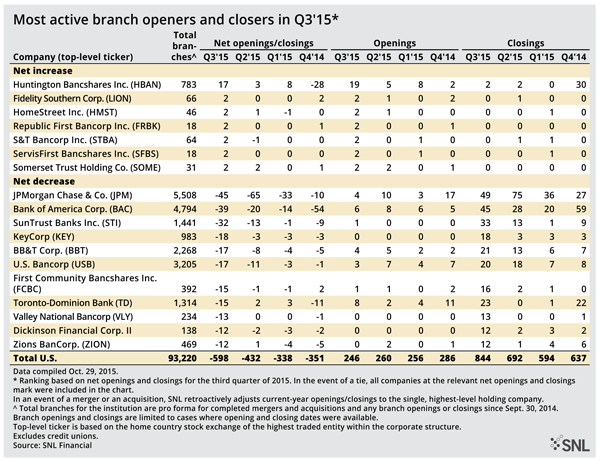 Valley Chairman, President, and CEO Gerald Lipkin said the bank, which closed 13 branches during the third quarter, will extend that effort. It plans to close 15 more by the end of 2016.

"The right-sizing of Valley's branch network through closing or downsizing branches is a major component in the bank's organization-wide cost cutting initiatives," Lipkin said during the company's third-quarter earnings call. "With alternative delivery channels lowering foot traffic at branches, it has become apparent that multiple offices in close proximity to each other is not a winning approach."

Additionally, Lipkin added, "many of the branches we are closing were the result of mergers where overlaps were tolerated."

Indeed, as Financial Institutions Consulting Inc. President Charles Wendel noted in a recent interview, ongoing merger-and-acquisition activity has contributed to the overall reduction in branches. When one bank buys out another, it often looks to reduce the combined company's expense base by closing overlapping branches. The savings are pushed to the bottom line, bolstering the deal's profitability.

A recent SNL analysis found that, through Oct. 19 of this year, there were 220 deal announcements in the banking sector, essentially on par with the 221 announcements during the same period in 2014.

To be sure, bankers say, they are not abandoning branches altogether. Many customers still want to meet in person for major transactions, to learn about new products or to address problems. And branches in high-traffic areas still function as important billboards, reminding customers that banks are committed to serving neighborhoods and communities.

"[W]e wish to emphasize the fact that we still believe in the value of a well-structured branch system positioned to serve the needs of our current and potential clients both living and working in our marketplace," Lipkin said. "What we are focusing on is eliminating redundancy and oversized branches throughout the network." 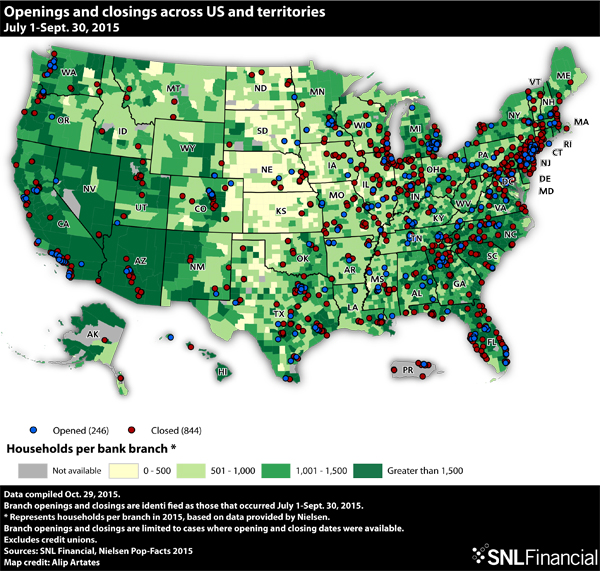 What's more, Sandler's Fitzgibbon said, when interest rates do eventually rise, depositors likely will start shopping for better rates. When this happens, banks will find themselves competing for core deposits, and branches likely would play a role in banks' sales and marketing efforts.

"I do think the overall branch reduction trend will continue because of the technology piece of this," Fitzgibbon said. "But when rates rise, the pace could at least slow."

Federal Reserve policymakers have debated for the past couple years whether to begin raising short-term interest rates off of the basement level at which they have hovered since the aftermath of the 2008 financial crisis. But they have consistently passed on making a move. This fall, after meetings in September and October, policymakers in part decided against rate hikes on concerns about global economic fragility.

The Fed's policy committee meets one last time this year, in December, and Fitzgibbon joined many by forecasting a modest 25 basis point increase—or no increase at all.

If there is a 25 basis-point bump, he said, it likely would be made to show the Fed's confidence—albeit cautious confidence—in the domestic economy and likely would be followed by several months of inaction. That would mean that rates would only inch up in the first half of 2016, benefiting banks little. As such, any influence from interest rates on branch trends is not likely to materialize before the second half of next year at the soonest, Fitzgibbon said.

"We're not going to see a big change any time soon," he said. 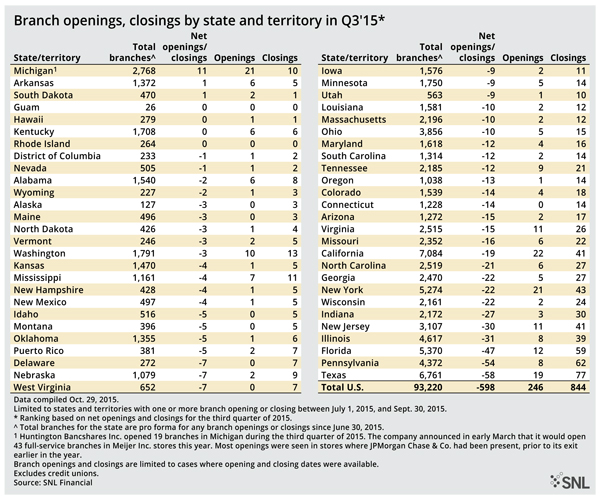