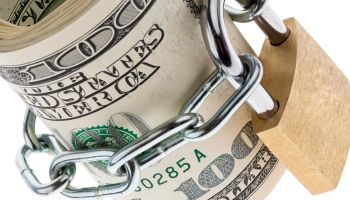 Some banks are building term funding and offering higher rates on CDs in hopes of locking in lower cost funds before short-term rates rise further.

The Federal Reserve finally increased short-term rates in mid-December 2015, and more hikes are expected later this year. Prepping for a potential turn in the rate cycle, some institutions took actions in the third quarter of 2015 to build term funding and marketed CDs to their customers while costs remained low.

Even with those efforts, CDs remained a relatively small portion of banks' deposit bases, representing 13.5% of total industry deposits at Sept. 30, 2015. This was down from 14.2% at year-end 2014, according to SNL data. Those balances exclude several hundred institutions that hold bank charters but do not principally engage in banking activities, among them industrial banks, nondepository trusts and cooperative banks.

However, larger banks, the price setters in the industry, have begun to increase the relatively small concentrations of CDs on their balance sheets. Some of those institutions have grown CDs modestly in the past quarter, possibly responding to the regulations such as the liquidity coverage ratio, or LCR, which places greater value on retail deposits.

Banks with more than $250 billion in assets have grown CDs the most among the larger banks. Those institutions, which held 48.6% of overall deposits in the industry at the end of the third quarter, increased CDs to a median of 5.4% of their deposits from 4.5% at year-end 2014.

Some banks have reported outsized growth in CDs. SNL found 11 banks—when excluding those that had completed an acquisition in the third quarter—that increased their CD balances by more than 30% from June 30, 2015, to Sept. 30, 2015. 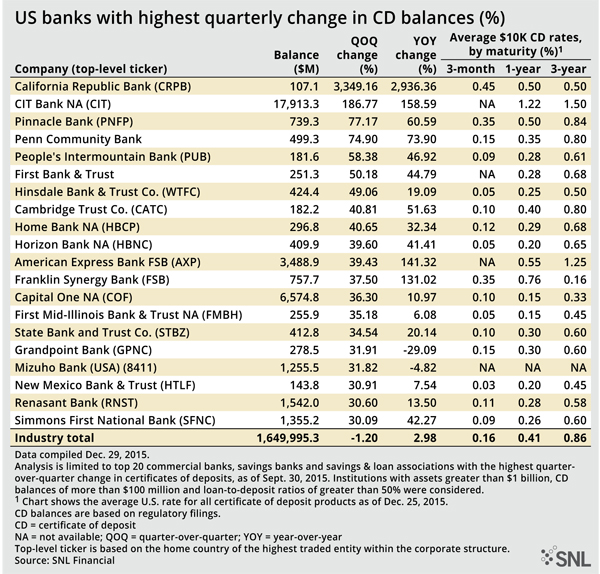 Some banks are currently running "CD specials," campaigns aimed at building term funding. TCF Financial Corp. is one of those institutions and said the CD campaign aided in deposit growth in the third quarter, but caused the average interest rate on its deposits to rise to 0.31%, up 3 basis points from the prior quarter.

TCF is offering CDs with durations between 10 months and 18 months at prices ranging from 90 basis points to 120 basis points depending on the product and market. TCF said during its third-quarter earnings call that it has seen deposit rates in markets where it competes with banks subject to the LCR be impacted by the rule.

"And so the marketplace as it relates to the bigger banks and some of the LCRs as it relates to building their liquidity, that's been an impact to us as we have seen larger competitors, with longer rates," Michael Jones, then the TCF CFO, said on the call, according to the transcript.

In addition to TCF running special campaigns, Ally Financial Inc. recently rolled out a new tiered CD system, with plans to offer customers different rates based on the amount held in the account. The new tiers took effect Nov. 7 for new and renewal business and set different rates for accounts with less than $5,000; between $5,000 and $24,999.99; and $25,000 or more.

State of CDs at community banks

While the relative size of CD balances declined at smaller banks, some institutions increased CD rates in the third quarter even before the Fed raised short-term rates late in 2015. SNL data show that over the last year, average rates across the banking industry for one-, three- and five-year CDs rose 3, 5 and 6 basis points, respectively, as of Jan. 6.

When the Fed increased its federal funds rate to a target range of 0.25% to 0.50% in December 2015, it marked the first rate hike since the credit crisis. Market observers expect the central bank to raise rates by 75 basis points or more in 2016, according to a survey of more than 60 economists conducted by The Wall Street Journal.

If history repeats itself, CDs will increase on bank balance sheets as interest rates rise and the cost of those products will climb. CDs became larger portions of banks' deposit bases during the last tightening cycle, while noninterest bearing deposits declined. Some advisers believe the shift will occur again and many of the funds that flooded into money market accounts in recent years will move to higher-yielding accounts like CDs.

While expectations vary for just how much higher rates will change the composition of banks' deposit bases, most observers believe that CDs will grow and their cost will rise.