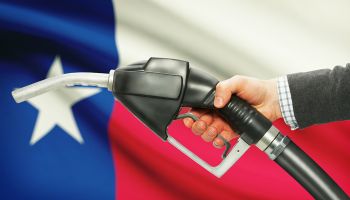 The city of Houston is the epicenter of the U.S. energy recession, and bank investors are closely watching to see if area banks are running on fumes.

It is difficult to overstate the seriousness of the situation Houston faces: Prolonged low energy prices have caused the torrent of new jobs to slow to a modest trickle, and the economic weakness may be spreading from oil and gas producers to their landlords and employees.

Another cause for concern is the cyclical relationship of energy and Texas banking.

The state is, after all, the one featured in the well-known ratio that indicates how troubled a bank is, and how likely it is to fail. But for now, banks based in Houston say they are well managed to withstand the crisis, even in the face of declining job growth and economic contagion.

Houston, we have a problem

Houston is now at risk from falling oil prices after years of pronounced economic growth spurred in large part by the energy industry.

Energy, manufacturing, real estate and wholesale trade industries could all struggle during the year; the forecast predicted the energy industry could lose another 9,000 jobs in 2016, with the bulk occurring on the exploration and production side.

"Clearly, boom time mentality was fully underway," said Robert Gilmer, director of the Institute for Regional Forecasting. "Times were good, and then in 2015, with the collapse in oil prices, the jobs machine basically broke down."

Two sides of the energy line

The energy crisis has drawn a geographic line down the city.

The bust has affected the upstream producers in Houston's energy corridor located on the west side, while the downstream producers active in refinement and petrochemical production are concentrated on the east side and are growing.

The city has seen $50 billion in construction spending to support and expand those industries, according to the Institute for Regional Forecasting report. Gilmer called it the "capital equivalent of a couple hundred downtown office buildings" and said the city is acting like a "big integrated oil company."

The city also benefits from the presence of other major industries, serving as a transportation hub with a large port and home to several large corporations, a massive medical center and government agencies, including a NASA space center. 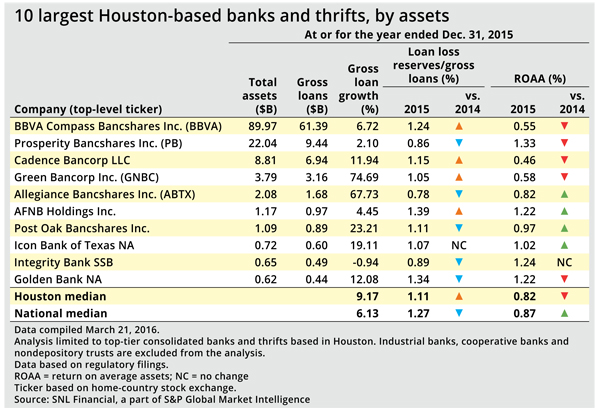 But in interviews, industry experts and bankers singled out office space, especially for larger tenants, and apartments as the real estate sectors to watch for signs of weakness.

Two million square feet of office space is slated to come on the market in early 2016, according to the 2016 Houston Employment Forecast.

At the same time, office vacancy rates in the energy corridor have jumped from 7% to 14% and could rise to 20% before the end of the year as new and subleased space opens up, Gilmer said.

He added that apartment occupancy and rents have held up, but could deteriorate if apartments continue to open up at current price levels. Nearly 28,600 apartment units were under construction at the end of October 2015, according to an Apartment Data Services figure in the 2016 Houston Employment Forecast.

The banking environment in Houston and more broadly in Texas has changed since the oil bust of the 1980s. Gilmer went so far as to call it "another world and another time—a mistake that won't be repeated."

And that has put banks on the defensive with their investors, regulators and borrowers. In recent comments, executives at Houston-based banks stressed that their loan books are as diversified as the city.

Despite being headquartered in Houston, Prosperity Bancshares Inc. has only about 25% to 30% of its assets in the immediate area, Chairman and CEO David Zalman said during the bank's fourth-quarter 2015 earnings call on Jan. 27. Most of the city's real estate softness has appeared in the non-owner occupied office facilities and a few apartment complexes, to which Prosperity has little exposure according to comments from the conference call. 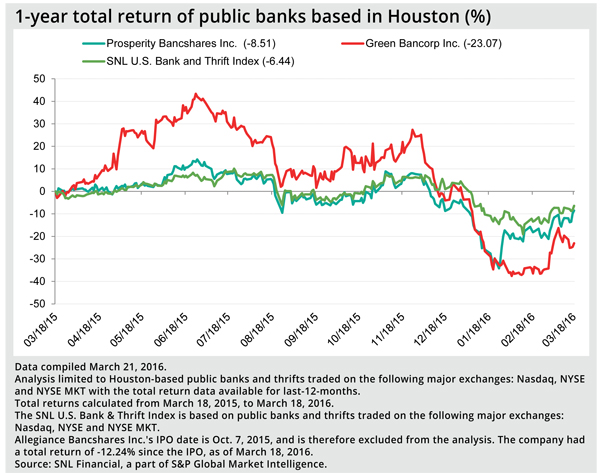 Executives at Green Bancorp Inc., which is also based in Houston, reported "little direct exposure" to the real estate sectors that are experiencing softness in the city, according to comments made during the bank's fourth-quarter 2015 earnings call on Jan. 29. Management said that "granularity" and a focus on multiple smaller relationships with borrowers has always been the bank's philosophy and will "play well" as energy continues to fluctuate.

"As far as the Houston economy goes, the rumors of our death are greatly exaggerated, as we see it today and as we see it in our portfolio. It's a huge city," Chairman and CEO Manuel Mehos said.

State banking regulators are also proactively working with banks to assess portfolios and watch for signs of stress. Regulators at the Texas Department of Banking have identified and closely watched institutions that have direct or indirect energy exposure, oftentimes calling the banks because the figures are not broken out in call reports, Deputy Commissioner Robert Bacon said in an interview.

Bacon said regulatory efforts between state and national examiners are "all hands on deck," but that "we're not panicking, the sky's not falling at this point."

If oil stays stable, Bacon does not anticipate many bank failures, if any at all. However, regulators are keenly aware that the health of the Texas banking industry right now is more closely correlated with the price of oil, and they could decline in lockstep.

"If oil stays at $30 a barrel or especially if it drops further, we understand that there are going to be some companies that have some problems and classified assets are probably going to increase. It's just going to happen," Bacon said, later adding: "I think at this point, based on where we are today and what we've seen, our banks are well-prepared to weather a storm if it doesn't get a lot worse."

State regulators are "very concerned" about the indirect impact energy prices will have on other portfolios, particularly commercial real estate, said Kurt Purdom, director of bank and trust supervision at the Texas Department of Banking. Purdom said the indirect influence will be the hardest aspect to predict, and recalled the swings he saw in real estate development when he was a Houston bank examiner in the 1980s.

Much about the future growth of Houston and the health of its banks is dependent on the price of oil.

But the current energy recession has a bright spot in that it is more contained than previous ones, which were often accompanied by significant national or global recessions, Gilmer said. That is good news for a city that has drawn two-thirds of its job growth from broader national trends and activity since the 1990s, he added.

But Gilmer also said he does not believe diversification beyond energy will save Houston in this current energy recession, given how large a role the industry has played in the city's success over the last 40 years. Instead, he believes developers, banks, and city planners should get better at navigating the fluctuating price of oil.

"It's like riding a steep roller coaster. I think [the city would] be better off figuring out the formula for living with an unpredictable price of oil than [worrying] about diversifying," he said. "You need to fasten your seatbelts … to survive all the way to the end. If you don't understand how the roller coaster works, you're likely to fall off." 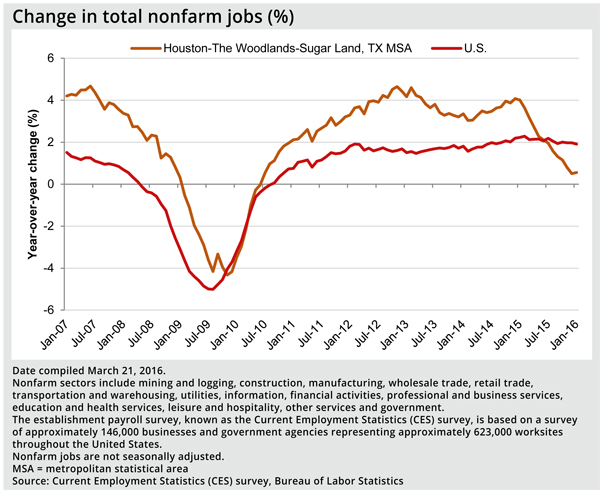 This article originally appeared on SNL Financial’s website under the title, "The energy problems are bigger in Houston, Texas"