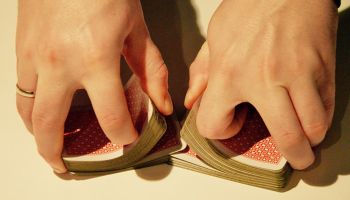 Commercial banks' NIM rebounded last year after hitting historical lows in the first quarter of 2015. Banks found better opportunities to put funds to work through their loan portfolios during the last nine months of 2015, while the prospect of higher interest rates and the eventual decision by the Federal Reserve to increase short-term rates helped ease pressure on earning-asset yields. After margins rebounded late in 2015, however, further increases in the key profitability measure are now in question, even if the Fed continues raising short-term rates.

"It is commonly believed that increased interest rates will be positive for bank earnings, but that assumption depends crucially on whether the yield on earning assets rises faster than interest expense," Kroll Bond Rating Agency's U.S. Financial Institutions team noted in a May 10 report, providing an outlook for bank revenue and earnings in 2016.

"Although most banks have positioned for rising interest rates by having asset sensitive balance sheets, KBRA notes that the extent of any benefit depends on the stickiness of low cost deposits in a rising rate environment," according to the KBRA report.

The Fed's increase in short-term rates in mid-December 2015 helped lift margins in the 2015 fourth quarter as LIBOR began increasing the last week of November 2015 ahead of the long-awaited rate hike. But, margins came back under pressure in the first quarter as funding costs held steady, while competition kept loan yields under pressure and decreases in long-term rates pushed security yields lower.

Margins were already under pressure in the first quarter. Commercial banks' fully taxable-equivalent net interest margin fell to 3.05% in the first quarter of 2016 from 3.10% in the linked quarter but still remained above the recent low point of 2.96% sustained a year earlier, according to SNL data. 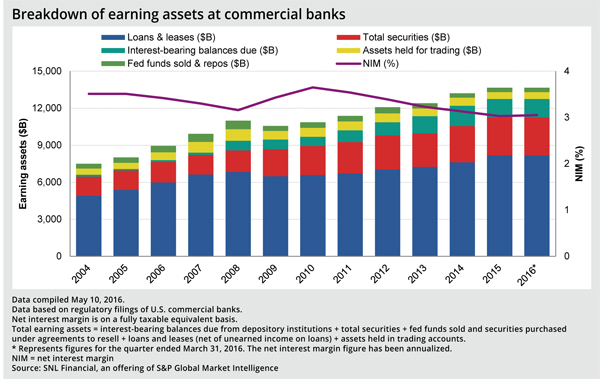 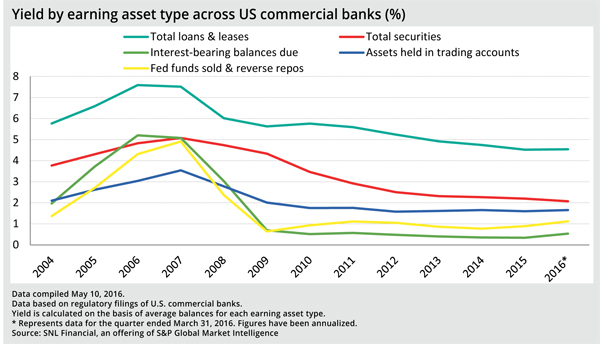 Loan yields have rebounded from recent lows, but remain depressed. Commercial banks' loan yield rose in the first quarter, albeit modestly, inching 2 basis points higher to 4.54% from 4.52% at year-end 2015.

The institutions' yield on securities, however, came under greater pressure as long-term rates declined in the first quarter. Commercial banks' security yield dropped 13 basis points to 2.07% from 2.20% at the close of 2015. Long-term rates decreased even more in the period, with the yield on the 10-year Treasury falling 49 basis points in the first quarter from year-end 2015.

The low-rate environment and post-Dodd Frank capital requirements have left bank managers with fewer attractive options to put their funds to work in their securities portfolios.

For instance, larger institutions face higher risk-weightings on many securities, requiring them to hold more capital against higher-yielding securities. Ethan Heisler, a managing director at Citigroup, said in a late-April note to treasury clients that bank managers need to ask whether purchasing certain bonds are worth the investment.

"Will it generate a positive return over cost of capital for the interest rate, credit, or liquidity risk you will need to take that is worth the time and effort, when the alternative is to keep the money at the Fed for 50 basis points overnight? There are not too many bonds that fit that mold, short of some structured products for example, designed to profit from the relationship between the U.S. Dollar and Japanese Yen currencies, and most bank portfolio managers understand that their bank's board of directors do not like complexity," Heisler wrote at the time.

Throughout 2015, banks found better alternatives to holding funds at the Fed and earning just 25 basis points for most of the year. Those investments allowed banks to significantly decrease interest-bearing balances, which carry relatively low yields, to smaller portions of their earning-asset bases.

That trend ceased in the first quarter, with interest-bearing balances holding steady at nearly 11.0% of commercial banks' earning assets, flat with year-end 2015. Those levels are still well above the range reported between 2008 and 2012, when interest-bearing balances ranged from 6.8% to 8.9% of earning assets. The current balances are down notably from the 12.4% level reported in 2014.

As banks decreased the relative size of interest-bearing balances, they deployed funds into higher-yielding assets, and in particular, loans and leases. Loan and leases rose to 59.9% of average earning assets in 2015 and held nearly flat at the level through the first quarter. Loans have become larger portions of bank balance sheets in recent years, rising to current levels from 57.7% in 2014.

Institutions also received a boost from declining funding costs in 2015, but that tailwind dissipated in the first quarter, when the cost of interest-bearing liabilities rose to 47 basis points from 43 basis points at year-end 2015.

The cost of interest-bearing liabilities had declined every year since 2007 as the Fed pushed short-term rates near zero. Kroll Bond Rating Agency noted that the Fed pushed banks' cost of funds to the lowest level in nearly 30 years, effectively transferring wealth from depositors to banks. Kroll said the reverse could occur if interest rates rise further, limiting just how much banks could benefit from higher interest rates.

Many bankers believe that higher rates will cause their net interest margins to expand. Meanwhile, Kroll argued that interest expense has been abnormally low and served as a subsidy to bank earnings.

"If large amounts of low cost deposits migrate towards time deposits or higher yielding investment products, then any benefits from rising rates could be modest at best," Kroll noted in its recent outlook. 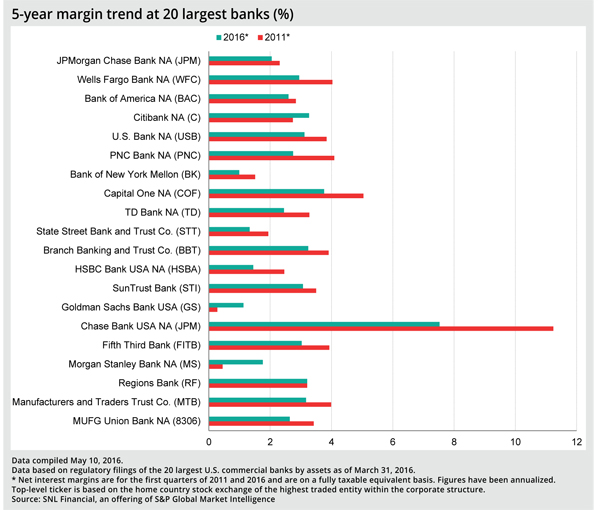 This article originally appeared on SNL Financial’s website under the title, "Doubts cast over margin expansion regardless of higher rates"