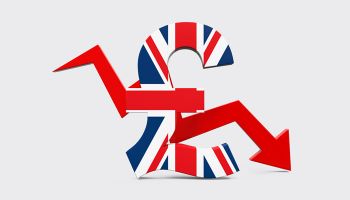 The unexpected move, known as Brexit, is another reminder of the unpredictability of markets and the impossibility for stress tests to envision every scenario. Skeptics argue the development shows DFAST's vulnerability.

"The bank no longer looks like what it did when it did its stress test," said Mayra Rodriguez Valladares, managing principal for bank consulting firm MRV Associates. "If you try to use the results from stress tests you did back in April, how valid are they now that the British pound is down nearly 10%?"

At the other end of the spectrum, stress-test enthusiasts say such shocks validate the exercise. With sophisticated models in place, banks can react to Brexit and stress their portfolios in real time by re-running the models with different inputs, said Ed Robertson, co-head of the financial institutions group for Situs.

"Banks and regulators can adjust to the results of Brexit, enter that into a model and get a result in hours or a week," he said in an email. "Before, there was no real way to stress test for this." 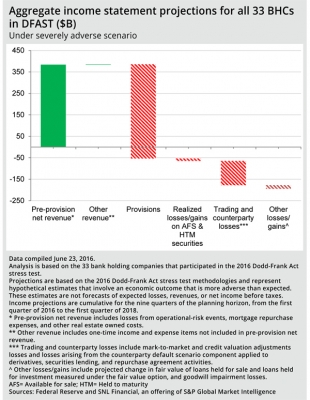 Click on image to enlargeAs for the actual stress-test results, all 33 banks passed with relative ease. Huntington Bancshares Inc. arguably came closest to breaching the Federal Reserve's minimums, with a Tier 1 common equity ratio of 5.0%, compared to a minimum of 4.5%. And Morgan Stanley and BMO Financial Corp. were close to the Tier 1 leverage ratio limit, both at 4.9%, compared to the required minimum of 4.0%.

While the Brexit vote appeared to take markets by surprise considering polling suggested a narrow victory for the Remain camp, there is scant worry that the vote will trigger a widespread recession. And since the stress tests envision a severe crisis, including 10% unemployment and a 50% crash in the stock market, banks appear well-positioned to handle any Brexit-related shocks.

"The U.S. banks subject to stress tests can withstand a heckuva lot of loss, and I don't think there is anyone looking at Brexit and saying that it will result in an immediate counterparty threat that is going to have spillover to broader markets," said Adam Gilbert, global regulatory leader of the financial services practice for PricewaterhouseCoopers.

Gilbert said banks do face a temporary headwind as the Brexit vote saps any momentum in stock prices the sector might have enjoyed from the June 23 stress-test results.

And Fitch Ratings similarly said in a June 24 report that the stress-test results showed the sector's improving resilience. The Compass Point note, as well as one from Nomura Group, highlighted some relatively weak results from Huntington and KeyCorp, which the analysts attributed to the negative rate element scenario. 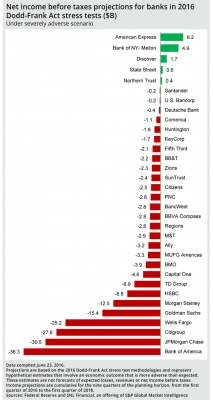 In the Nomura Group note, analyst Steven Chubak said the two regionals, as well as American Express Co., could be "at risk of having to potentially exercise the mulligan/lower their [capital] asks" when the Comprehensive Capital Analysis and Review results are released.

From a profit-and-loss perspective, the largest banks showed the largest losses in a stressed environment, with Bank of America Corp. topping the list with a projected loss of $36.3 billion in the stressed scenario. However, the bank showed plenty of capital to withstand the losses, as its common equity Tier 1 ratio would drop to a low of 8.1% under the scenario, well above the regulatory requirements.

In aggregate, the 33 U.S. banks subject to stress tests reported net losses of $195.0 billion, as provisioning of $438.6 billion wiped out all of the industry's projected revenue for the hypothetical nine-quarter period.

Commercial real estate, a sector under scrutiny as bubble concerns proliferate, would produce a loan loss rate of 7.0% for the industry in aggregate.

The Dodd-Frank Act Stress Test represents only the quantitative portion of the stress test. Regulators also have a qualitative review where they examine a bank's procedures, such as how they ensure data quality, a topic that could trigger failures in this year's exercise. Those results, along with regulatory approval or rejection of banks' capital plans, will be announced as part of the Fed's CCAR, slated for release June 29.

In years past, banks have been able to pass the quantitative portion of stress tests but have been tripped up on the qualitative section.

"The banks have made tremendous investments in these areas to address the Fed's issues," PwC's Gilbert said. "So, it's really hard to say, but it wouldn't be surprising if there was some rejection on the qualitative side."

[Editor’s Note: The CCAR results subsequently came out on June 29. The Fed did not object to 30 bank holding companies’ plans. It did object to those of Deutsche Bank Trust Corporation and Santander Holdings USA, Inc. “based on qualitative concerns.” The Federal Reserve did not object to the capital plan of Morgan Stanley, but is requiring the firm to submit a new capital plan by the end of the fourth quarter of 2016 to address certain weaknesses in its capital planning processes.] 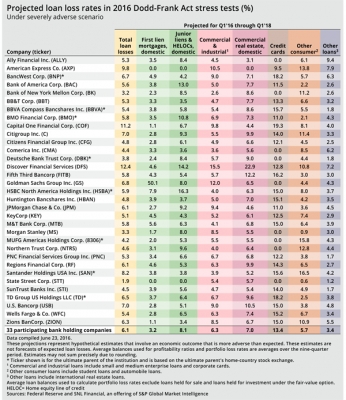