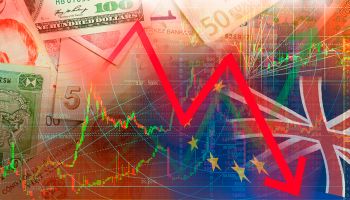 Global uncertainty abounds after the U.K. voted to leave the European Union, leaving the U.S. attempting to gauge the potential impact on financial institutions with exposure to the U.K.

Putting some numbers on it

Banks report exposure to countries outside the U.S. on Form FFIEC 009a if that exposure exceeds certain thresholds.

The FFIEC includes a variety of claims in its definition of exposure, including deposit balances, securities, federal funds sold and loans, along with many other types of assets. This exposure is broken down into various types of borrowers, including banks; public sector entities, like government agencies and central banks; various nonbank financial institutions, including insurance firms, investment banks and pension funds; and the "other" sector, which includes counterparties classified as corporate or household.

S&P Global Market Intelligence analyzed the most recent country exposure filings available, for the quarter ended Dec. 31, 2015, to get a sense of who had the most exposure to the U.K. following the Brexit vote. 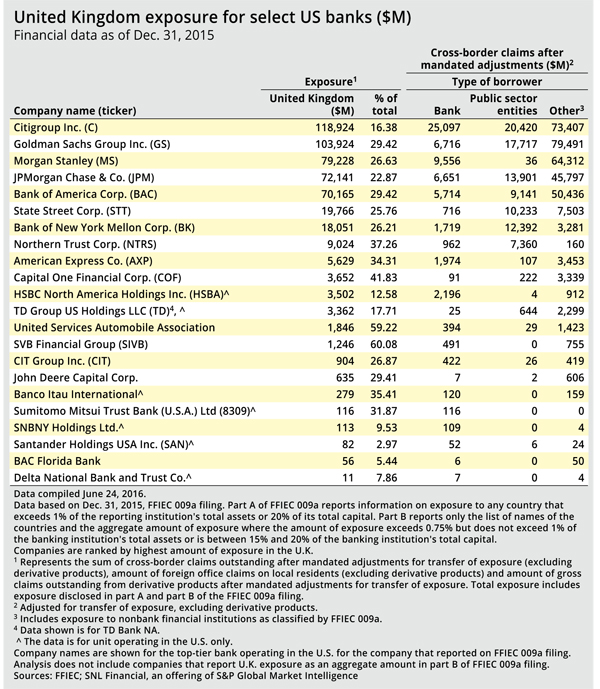 Fitch Ratings expects the Brexit decision to be expensive and disruptive for U.S. global banks with significant operations in the U.K., cutting into their medium-term profitability. The rating agency expects restructuring costs related to Brexit to hurt earnings but also noted that increased volatility in foreign exchange and bond markets should boost trading revenue.

Ultimately Fitch expects the Leave decision will be moderate for the U.S. global banks. The rating agency believes the living will process was a useful exercise for the group as it now faces decisions about restructuring certain operations, relocating staff and potentially refocusing European operations.

Fitch and S&P Global Ratings downgraded the U.K. in the wake of the Brexit vote, and Moody's adjusted its outlook on the country to negative.

DBRS confirmed the U.K.'s rating. Fergus McCormick, head of sovereign ratings at the agency, said on a conference call that the short-term impact on the U.K. would be significant as financial volatility has increased after the political upheaval created in the wake of the vote.

And what about the smaller banks?

In an S&P Global Market Intelligence analysis, some smaller companies also reported relatively high levels of exposure to the U.K.

Silicon Valley Bank, a unit of SVB Financial Group based in California with a focus on serving technology companies, had the highest exposure to the U.K. in percentage terms among banks in the analysis. More than 60% of the bank's overall foreign exposure was to the U.K.

United Services Automobile Association followed closely; the insurance company, which is the holding company for USAA Federal Savings Bank, had 59.22% of its total foreign country exposure to the U.K.

"Markets hate uncertainty, and the Brexit vote leaves both Britain and the EU in uncharted political and economic waters," wrote Wasif Latif, head of global multi-assets at USAA on June 24. For USAA, Latif said, the biggest concern is not just the U.K.'s departure from the EU, but whether or not other countries will follow its lead.

"There is a growing feeling among people across the continent that a more unified Europe means they will be subject to more regulation and have less say on major issues that affect their future, including the current migration crisis," he wrote.

This article originally appeared on SNL Financial’s website under the title, "Quantifying US financial institution exposure to the UK"