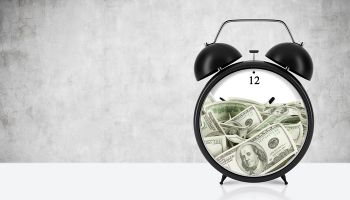 Banks have steadily built their held-to-maturity bond portfolios to protect against rising rates, but some advisers have questioned the practice.

Banks have prepared for higher interest rates and reacted to new capital and liquidity standards by placing larger amount of securities in held-to-maturity (HTM) portfolios.

While the strategy has gained popularity in recent years, some advisers have argued against the approach, noting that the Street is not concerned about short-term changes in bond portfolio valuations.

Many bank managers took steps to prepare their bond portfolios for higher interest rates in 2016, but the opposite has occurred. Long-term rates have fallen considerably this year, even after the Federal Reserve finally lifted short-term rates in mid-December. The yield on the 10-year Treasury fell to 1.78% at the end of the first quarter from 2.27% at year-end 2015, and has plummeted since then, dropping below 1.4% after the United Kingdom decided to leave the European Union. The uncertainty created by Brexit has sparked a flight to quality in the bond markets and sent yields lower.

Even as rates declined, many banks expected rates to go higher and built their HTM buckets, which, unlike available-for-sale (AFS) portfolios, are not subject to mark-to-market adjustments on a quarterly basis. Those mark-to-market adjustments in AFS portfolios flow through accumulated other comprehensive income (AOCI) and impact tangible common equity. Banks have sought to mitigate the impact of changes in market valuations on their book values by relying on their HTM portfolios more in recent years. 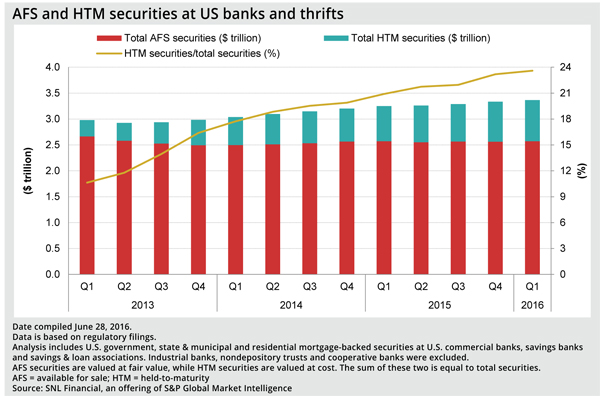 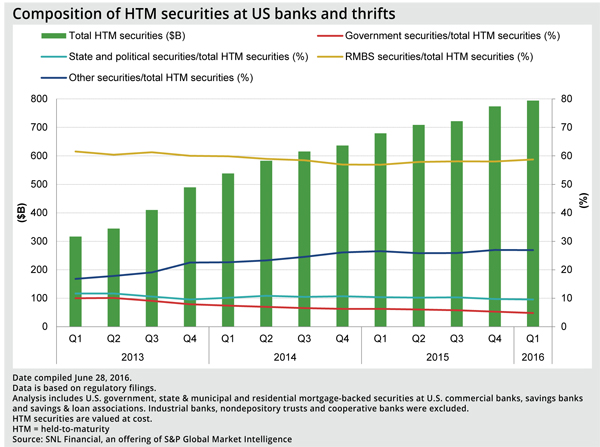 In the first quarter, the banking industry in aggregate grew HTM securities by 16.9% from year-ago levels, while AFS securities held nearly flat in the period.

As long-term rates fell back near historical lows, some institutions invested cautiously, keeping in mind the negative AOCI impact that could come if interest rates begin to rise. When evaluating investment opportunities, Wells Fargo & Co. CFO John Shrewsberry noted at a recent investor conference that his company considered what could happen to capital levels if rates rose 100 basis points or more.

Many securities banks hold are likely to see their values come under pressure if rates rise. This has become even more pronounced for institutions with more than $50 billion in assets, which are subject to the liquidity coverage ratio, or LCR. That provision requires them to hold higher concentrations of market sensitive securities such as Treasurys and Ginnie Maes.

Other regulations have caused banks to be more wary of swings in the market and the impact changes in values would have on their balance sheets. The originally proposed Basel III rules in the summer of 2012 required AOCI to flow through regulatory capital at all banks. Ultimately, a year later, the final Basel III rules allowed non-advanced approach institutions, generally those with less than $250 billion in assets, to opt out of that provision.

Still, some advisers have encouraged banks to not let their interest rate outlook dictate their investment strategy. Ethan Heisler, president of The Bank Treasury Newsletter, suggested in a late June note to clients that banks should "stop worrying about AOCI." He said AOCI is unlikely to become a "big number" on bank balance sheets for the foreseeable future since rates are unlikely to rise soon.

Others have argued that banks should not be focused on valuation changes in their bond portfolios no matter what happens to rates. Scott Hildenbrand, chief balance sheet strategist at Sandler O'Neill, said during an early June webinar for the firm's clients that bank managers should not allow mark-to-market concerns influence investing activity. Asset/liability needs should drive investments in the bond portfolio, he said.

Hildenbrand further noted that as long as banks recover the funds they put to work in their bond portfolios, institutions should not worry too much about fluctuations in the market.

"An investor is not going to care about the valuation of a company based on the interest rate mark of the bond portfolio," Hildenbrand said. 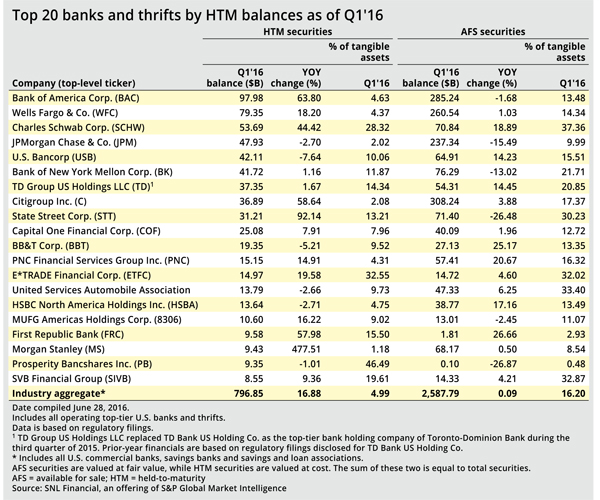 This article originally appeared on SNL Financial’s website under the title, "Banks build HTM portfolios even as rates decline"