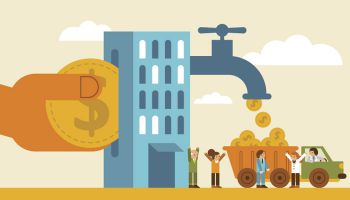 The outlook for returns in the U.S. banking industry now looks far rosier than even six months ago, but performance could fall short of some market expectations, according to S&P Global Market Intelligence's 2017 U.S. Bank Market Report.

Assuming interest rates increase as expected, S&P Global Market Intelligence expects banking industry earnings to jump 10.6% in 2017 under our base case, which includes no potential benefit from corporate tax or regulatory reform. While higher interest rates will mean sustained expansion in U.S. banks' net interest margins and push returns on equity to levels not seen in a decade, corporate tax and regulatory reform might have to become reality for returns to meet the Street's expectations.

Higher rates will certainly offer a lift to bank profitability, but the industry could receive an even bigger boost if corporate tax and regulatory reforms come to pass. Changes to the corporate tax rate should have a larger impact on bank earnings and could come in one fell swoop, whereas regulatory relief remains uncertain and could face political opposition. Policy analysts and other bank observers seem to agree that a full-scale repeal of Dodd-Frank is unlikely and that it would likely take years for the full impact of any regulatory changes to take hold.

Even in the absence of wholesale regulatory reform, smaller adjustments such as less stringent examinations, revisions to the stress-testing process and changes to the Volcker rule could allow banks to shrink fixed costs notably. 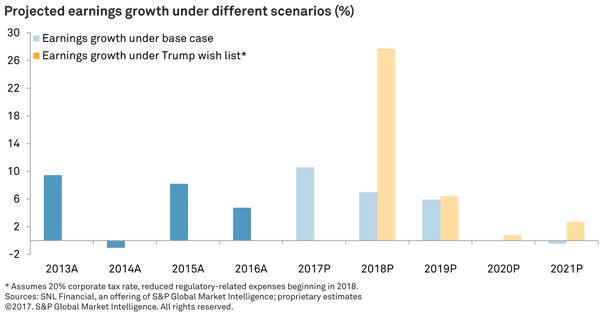 In one scenario in our analysis, we assumed that banks, under a "Trump wish list," could recoup one-third of the increase in costs beginning in 2018. We also assumed that the industry's tax rate could decline by 10 percentage points the same year.

Incorporating lower taxes and reductions to regulation-related expenses starting in 2018, the industry's return on equity could reach 12%, a level not seen since before the financial crisis. That level of return would allow many banks to earn their cost of capital, putting to bed the post-crisis debate over whether the nation's largest banks have earned the right to exist in their current form.

The possible earnings growth in 2018 nearly matches the gains sustained in the recent bank stock rally. If sweeping reforms do not come pass, bank earnings are still expected to grow by 7.0% in 2018, building on the double-digit earnings growth projected to occur in 2017. 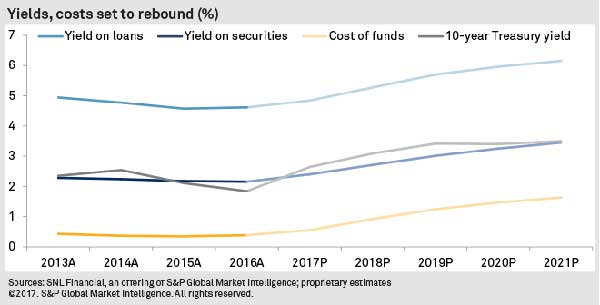 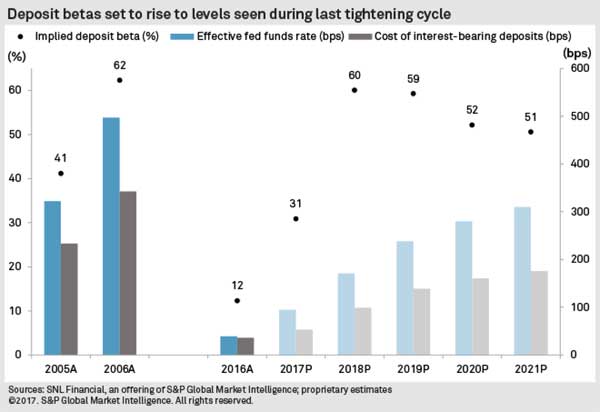 Expansion in key earning-asset yields over the next few years should provide a tailwind for bank earnings. For instance, expected increases in long-term interest rates will help security yields rise from near historical lows. Banks have also reached further out the yield curve, extending duration in their securities portfolios, according to repricing disclosures in call reports. S&P Global Market Intelligence projects the banking industry's security yield will rise in 2017 to 2.40% from 2.15% in 2016 and then expand further as interest rates move higher.

Loan yields will also rise materially over the next few years, buoyed by increases in both short-term and long-term rates. The benefits of higher rates will be somewhat mitigated by the competitive environment, particularly in 2020 and 2021 when credit quality is expected to sour.

Higher rates will also put pressure on funding costs, and depositors will continue shifting funds into interest-bearing accounts as greater yields become available. Some banks have already begun marketing CD specials at above market rates, and the practice is expected to continue. This likely will prompt some funds to leave noninterest-bearing products, which stand at far higher levels than what was seen heading into the last rate hike cycle.

Deposit costs only rose modestly in 2016 in the aftermath of the Fed's first rate hike in nearly a decade, but prices will increase more quickly as the pace of rate increases picks up. In 2016, the deposit beta—or how much of the change in rate banks passed onto customers—experienced by the industry was just 12%. That is considerably lower than during the last rate tightening cycle, when the industry had deposit betas of 41% and 62% in 2005 and 2006, respectively. We expect the deposit beta to increase to 31% in 2017 and 60% in 2018 after the impact of higher rates takes hold.

The increase in deposit costs, however, particularly over the next 12 months, will lag the expansion in earning-asset yields, allowing margins to expand materially from recent lows.

That margin expansion is expected to come as credit quality remains fairly benign in the near-term. While there are some concerns about easing underwriting standards in recent years, new loss formation remains quite low and sentiment among consumers and businesses has recently rebounded.

Relatively strong credit quality and higher margins will push bank returns to far more attractive levels than witnessed in recent years. But those returns could still fall short of some of the hopes currently reflected in bank stock prices.

S&P Global Market Intelligence analyzed nearly 10,000 banking subsidiaries, covering the core banking industry from 2005 through 2016. The analysis includes all commercial and savings banks and savings and loan associations, including historical institutions as long as they were still considered current at the end of a given year. It excludes several hundred institutions that hold bank charters but do not principally engage in banking activities, among them industrial banks, nondepository trusts and cooperative banks. The analysis divided the industry into five asset groups to see which institutions have changed the most, using key regulatory thresholds to define the separation. The examination looked at banks with assets of $250 billion or more, $50 billion to $250 billion, $10 billion to $50 billion, $1 billion to $10 billion and $1 billion and below.

The projections assume future Fed funds rates and 10-year Treasury yields based on a monthly survey of more than 60 economists conducted by The Wall Street Journal. Interest rate assumptions for 2020 and 2021 are based on the Congressional Budget Office's annual outlook. S&P Global Market Intelligence does not forecast changes in interest rates or macroeconomic indicators and aims to project what the banking industry will look like if the future holds what most economic observers expect.

The outlook is subject to change, perhaps materially, based on adjustments to the consensus expectations for interest rates, unemployment and economic growth. The projections can be updated or revised at any time as developments warrant, particularly when material changes occur such as the implementation of FASB's impairment model, the current expected credit loss model, or CECL. That provision would drastically change the way banks reserve for loan losses. S&P Global Market Intelligence intends to make periodic updates as circumstances warrant.

This article originally appeared on S&P Global Market Intelligence’s website under the title, "Double-digit ROEs in sight for US banks"