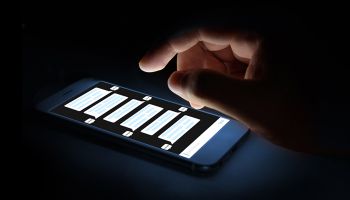 Part 3 of a series: What can a set of “laws” created by a science fiction author who began writing in the late 1930s have to do with banking’s future? This was part of a wide-ranging discussion Banking Exchange editors had with financial futurist Chris Skinner.

Those who resist the advent of bots—automated programs that text or speak to customers—in the belief that customers always crave the human touch, well, have amnesia.

And they may also be missing where things are heading.

In a free-ranging discussion with Chris Skinner, fintech blogger and founder of the Financial Services Club in Europe and the U.K., Banking Exchange editors asked him if the disruption from the digital revolution could result in a customer experience that is less good.

He didn’t think so. In fact, he felt the result would be just the opposite.

“We’ve been through that diminishment of the customer experience in the last 40 years,” said Skinner, “when we had the last waves of technology from call centers and internet banking and ended up with offshore call centers that many people feel uncomfortable dealing with.”

“Before that when you dealt face-to-face over the branch counter there was a relationship with a human and that kind of went away with automation,” Skinner continued. “Whereas now I think it’s coming back.”

Not in the same way, however.

“It’s coming back because many banks are investing in humanity and the digital process,” said Skinner. “They are saying, ‘If we can use avatars, AI, robotics, deep learning, and machine learning to really get to know our customers intimately through that digital footprint and financial data and then service them in a proactive, personal way, then we can have the relationship that was lost when people were thrown out of branches’.” 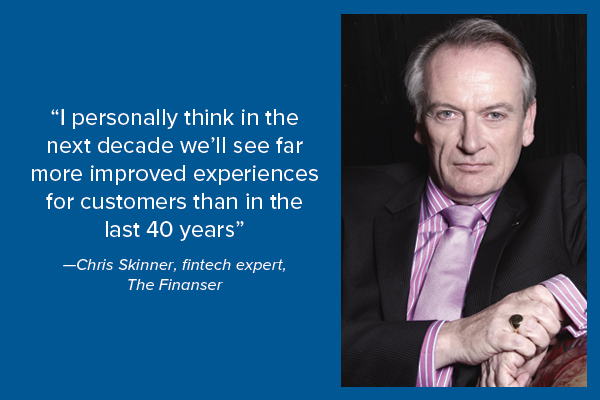 Skinner actually goes so far as to make a prediction about customer service:

“I would personally think in the next decade we’ll see far more improved experiences for customers than in the last 40 years.”

In support of his point, Skinner quoted legendary science fiction writer Isaac Asimov’s “Three Laws of Robotics,” which Skinner then adapted for the banking “universe.”

First, here are the original interconnected “laws,” from Asimov’s 1942 short story “Runaround,” which have been adopted by other science fiction writers as well:

Second Law: A robot must obey the orders given it by human beings, except where such orders would conflict with the First Law.

Third Law: A robot must protect its own existence as long as such protection does not conflict with the First or Second Laws. 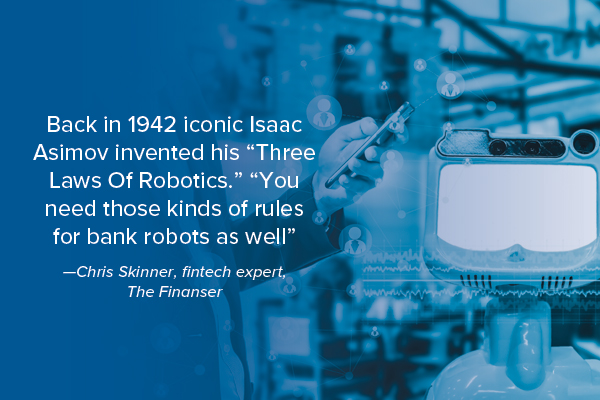 “You need those kinds of rules for bank robots as well,” said Skinner, ticking off his impromptu take on Asimov’s trio:

Skinner's Bankbot Rule 1. Do not rip customers off.

Skinner's Bankbot Rule 3. Freeze any activity that breaks the law.

He agreed when Banking Exchange editors suggested that the same rules would be a good guide for human bank employees. Following such rules—planting them on a desk as a plaque or paperweight as a reminder of rules to live by—would have saved Wells Fargo a great deal of trouble. [Skinner later elaborated on these new rules in his blog, "Three rules for banking bots"]

Skinner related how when he watched the Wells Fargo scandal unfold, his thought wasn’t, “That’s disgusting.” Rather he was just surprised it hadn’t happened before with other big banks in the U.S.

“What we saw in the U.K. is that when retailer experts were put in charge of retail banks, they pushed toxic credit down customers’ throats and got called out for it. That’s exactly why you shouldn’t have retailers running banks,” said Skinner. “You should have technologists and bankers running banks—managing risk and doing things in customers’ interest.”

Part 4 of this series will look at Chris Skinner’s thinking about the future of banking and the blockchain. Skinner, author of Value Web: How FinTech firms Are Using Mobile And Blockchain Technologies To Create The Internet Of Value, has been working on his next book. His views of blockchain technology continue to evolve.