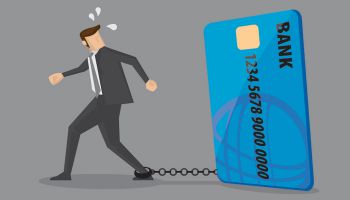 Consumers may feel dogged by credit card debt, but a new study by TransUnion indicates that distressed consumers will pay off another kind of debt ahead of credit cards.

“It’s a huge stunner,” says TransUnion’s Ezra Becker. “We don’t really understand it. This is a great illustration of how complicated the consumer’s decisionmaking process can be.”

The “it” Becker is referring to is the latest finding that the credit reporting giant’s researchers have unearthed in examining payment patterns in recent years.

TransUnion issues regular reports on consumer credit trends on a current basis, from quarter to quarter, but also periodically has its researchers dig deeper into longer-term observations.

And this time TransUnion has come up with an absolute headscratcher.

“We can’t say definitively what is driving this,” says Becker, a frequent interviewee for Banking Exchange. “We can only conjecture. Lenders don’t know everything about the consumer mindset.” Indeed, if any lender out there has ideas on what’s behind the pattern TransUnion found, Becker would like to hear it.

What consumers pay off first

Over the years, TransUnion has tracked shifts in the consumer’s hierarchy of payments. That is, what they will pay first, even to the point of not making other credit payments.

Typically, at the time mark or marks the company has studied, consumers display a tendency to favor a particular credit category.

For many years consumers with multiple forms of debt tended, for example, to prioritize their mortgage payments—to keep the roof over their heads. It was considered virtually a tradition, even an assumption, like Earth’s gravity.

Then, during the financial crisis, a point came where credit card debt had priority, for the sake of maintaining liquidity, and later, it was found that auto loans tended to take top priority.

A consumer might have to let their home go, the reasoning was, but they still had to get to work, if they had a job, or be able to hunt for a job. (A TransUnion paper that brings together multiple iterations of this research through 2011 is interesting and can be found here.)

TransUnion began analyzing the payment hierarchy in 2010, and in a study to be released today—May 17—at its annual Financial Services Summit, the company for the first time added unsecured personal loans to the usual mix of auto credit, mortgages, and credit cards.

And that’s where the surprise comes.

“While personal loans have existed for a long time, recent growth in the number of such loans led us to explore this product’s position along the payment spectrum,” says Becker.

The new study demonstrates that when confronted with the decision of what debt to pay and what to skip, borrowers in financial distress tend to prioritize unsecured personal loans ahead of the other three credit categories (auto, credit card, and mortgage).

The table below traces the pattern that the company found. The table contains only part of the analysis, as researchers went back into the early 2000s to see how long this effect could be observed. The early results surprised Becker and his team sufficiently to drive additional slicing and dicing of the data. The trend kept coming up the same.

At first blush—and second blush, for that matter—this defies logic. In fact, in the official TransUnion announcement, Becker called the finding “counterintuitive.”

No collateral, but first in line?

An unsecured personal loan is exactly that. A black mark will go on one’s credit record, but there is no house or car to lose. Most credit card lines are unsecured, the potential loss to the consumer being reduced liquidity and convenience.

Leave an auto loan unpaid and the car gets repossessed. No wheels.

Stiff your mortgage lender long enough and the lender forecloses.

An unsecured lender has the least practical leverage of all—or so it would seem.

So why, as the table above traces, are delinquencies on personal unsecured loans consistently coming in lower than other consumer credit categories? TransUnion found that this behavior held through various credit quality categories—where consumers with multiple credit types ran into difficulty, they prioritized unsecured credit. 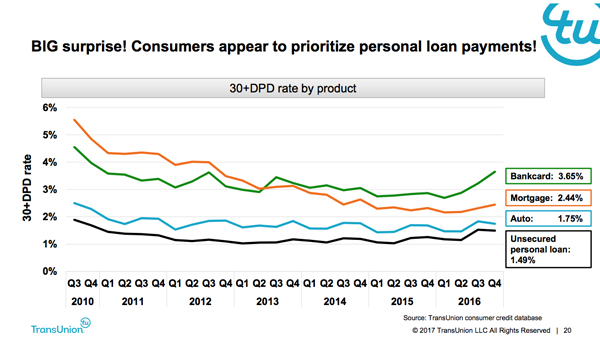 Becker does have a suggestion.

“We think there is a ‘light at the end of the tunnel’ dynamic going on,” he says.

Looking for a win?

The point of the research is to determine what consumers will pay first if they are in financial distress. Becker theorizes that this new twist suggests an urge to find closure on some front. It is reasonable to think that people in credit trouble will want to feel they are managing something properly.

Becker points out that unsecured personal loans have an average term of 28 months. By contrast, auto loans average 60 months. Mortgages run an average of 230 months. Credit card debt, as revolving credit, doesn’t have a set term, and offers minimum payment terms, something not part of the other credit types. For a troubled borrower, minimum payments don’t reduce the debt; they only maintain the utility of the card.

“We conjecture,” says Becker, “that consumers are looking for a psychological win.”

Personal loans typically have a smaller payment amount due each month than do auto loans or mortgages. For the lowest price among the three categories, a borrower can obtain a little peace of mind—crossing something off the mental list.

Becker adds that when consumers are struggling, a decision like this may be more emotional than rational.

There may also be an element of wanting to keep the unsecured lender friendly, Becker speculates. Some borrowers may expect they will need to return to the same source again, and want to have a clean record there.

In the interview, other possibilities were dissected. Could some of this be a loyalty factor towards credit unions, for example? Would members with a traditional bent think they should be paying back their fellow members?

Becker mulls that and pulls up TransUnion statistics on unsecured lending by category. He shakes his head (figuratively, this was a phone interview), pointing out that his firm’s numbers show that outstanding unsecured loan balances divide up this way over 2010-2016: 29.6% fintech lenders; 26.4% banks; 23.1% credit unions; and 20.9% traditional finance companies.

Is there an evolving generational dynamic there? Possible, but the research didn’t go that far, Becker says. Again, the “end of the tunnel” idea beckons.

“Finding an opportunity to pay a debt in full can be a powerful motivator for a struggling consumer,” Becker concludes.

“Barring another such trauma to the consumer credit market” as the recession, says Becker, “we believe financially constrained borrowers will tend to pay their personal loans, auto loans, mortgages, and credit cards in that order.”