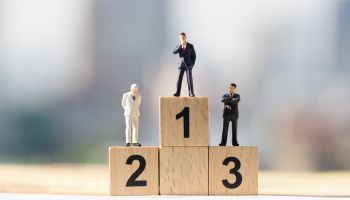 The largest U.S. banks and thrifts continued to grow in the second quarter, with 36 of the 50 largest institutions posting quarter-over-quarter gains.

Wells Fargo & Co. was the only one of the "Big Four" to buck this trend, posting a $20.69 billion decline in assets for the quarter.

Citigroup Inc., on the other hand, posted a $44 billion increase in assets, more than any other company in the top 50.

To conduct this analysis, S&P Global Market Intelligence examined the largest U.S. banks and thrifts by assets with a deposits-to-assets ratio of at least 25% for the quarter ended June 30. Some financial institutions that are regulated as savings and loan or bank holding companies, such as Goldman Sachs Group Inc. and Morgan Stanley, did not meet this criterion.

To compile a pro forma ranking, S&P Global Market Intelligence calculates pro forma assets after taking into account pending M&A transactions or deals that have closed after quarter-end. To be included in the pro forma adjustments, the deal value must be at least $200 million or involve assets or deposits in excess of $1 billion. Loan portfolio deals are not included due to a general lack of data on both deal consideration and the impact on total assets.

Associated Banc-Corp entered the list at No. 48 after announcing July 20 that it would acquire Bank Mutual Corp. in a deal valued at $428.3 million. The company's assets were increased by $2.71 billion and deposits by $1.89 billion to reflect the pending acquisition.

This article originally appeared on S&P Global Market Intelligence’s website under the title, "Top 50 largest US banks and thrifts in Q2'17"