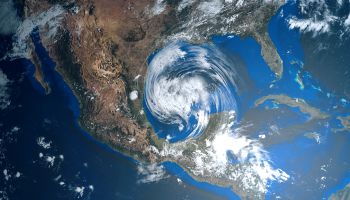 Hurricane Harvey likely will deal a big blow to the Texas economy, but the impact to U.S. banks and insurers could prove far less costly.

In the latest episode of the Street Talk* podcast, we asked three members of the S&P Global Market Intelligence team — Bill Holland, Tim Zawacki, and Zach Fox—how Harvey will affect the energy, insurance, and banking sectors in the near term as well as what lasting impacts could come from the storm.

Harvey made landfall on the Texas coast Aug. 25, and sustained rains in the days that followed led to unprecedented flooding in several cities, including metro Houston, the fourth-largest city by population in the U.S. The floods forced the evacuation of more than a million people and caused considerable damage to thousands of residential and commercial properties.

While the economic cost of the storm is estimated to possibly exceed $100 billion, insured losses will be far lower, according to Tim Zawacki, senior research analyst at S&P Global Market Intelligence. Most, but not all, homeowners' policies do not cover flooding, resulting in a wide gap between the economic loss and insured losses resulting from the storm.

"You may not see the volume of claims come in from this storm that you would from Hurricane Katrina, for example, where there was a much more specific impact on homeowners from wind," Zawacki said.

He said insurers could face business interruption insurance claims, but he sees more material losses arising in the auto physical damage line, which has already faced pressure in recent years.

How will banks be hit?

It might be too early to tell what losses banks could incur, but the experience with Hurricane Katrina more than a decade ago could serve as a guide.

Zach Fox, a senior reporter at S&P Global Market Intelligence, noted that mortgage delinquencies spiked in metro New Orleans in the quarter after Katrina hit but fell shortly thereafter as homeowners recovered from the storm. He highlighted banks with greater exposure to New Orleans such as IBERIABANK Corp. and MidSouth Bancorp Inc.

He noted that the three banks with the most branches impacted by Harvey are not surprisingly the three largest in the U.S.—JPMorgan Chase & Co., Bank of America Corp., and Wells Fargo & Co. BBVA Compass Bancshares Inc., Zions Bancorp., and Prosperity Bancshares Inc. are the fourth, fifth, and sixth largest banks by deposit market share in Harvey-affected Texas counties, and have a higher percentage of deposits in the area, likely making them more exposed to the storm than their larger counterparts.

"This is almost the definition of an extraordinary event where banks need to give homeowners a little bit more time to catch up on their payments," Fox said. "We have been hearing that from all those banks that I mentioned. They are refunding late fees."

While Katrina might offer clues as to how banks could fare post-Harvey, the same is not true in the energy space, according to Bill Holland, a senior reporter at S&P Global Market Intelligence. He highlighted the considerable difference between metro New Orleans and the Houston area, noting that the former is a receipt point for offshore oil and gas production, while the latter is the nation's largest petrochemical export and import complex.

Holland said Harvey did not harm the natural gas complex but dealt a serious blow to large, integrated oil companies such as Exxon Mobil Corp. because they were forced to shut down refineries. As of Sept. 1, 10 refineries remained shut down, representing 16.6 % of total U.S. refining capacity. [Editor’s Note: S&P Global first posted this article on Sept. 6.]

He said those refineries could take some time to come back online because the flooding will require the companies to take apart, clean, and dry the facilities, leading to extended outage periods. Those outages have already caused gasoline prices to rise considerably and prompted releases from the strategic petroleum reserve in Louisiana. [Editor’s Note: On Sept. 11 CNN Money reported that Texas refineries were still hurting from Harvey.]

"The energy infrastructure, depending on which commodity you're in, has either dodged a bullet or taken it in the shorts," Holland said.

This article originally appeared on S&P Global Market Intelligence’s website under the title, "Harvey hits Big Oil, but banks and insurers should weather the storm"

* Street Talk is a podcast hosted by S&P Global Market Intelligence. Listen on Soundcloud or Itunes.