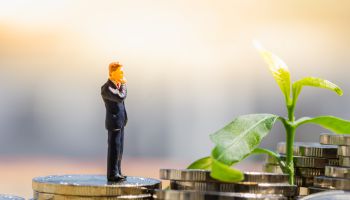 "We are seeing some loan growth, but it is mostly a slow grind," analyst Brad Milsaps of Sandler O'Neill & Partners said in an interview. "It is certainly very competitive out there, so banks are making the most of other strengths."

A case in point: U.S. Bancorp.

The Minneapolis-based bank said its average loans increased just 0.8% during the third quarter. Executives cited relatively high levels of pay-downs on commercial real estate loans and soft demand from business borrowers, many of whom are holding off on borrowing to invest in growth until they get clarity on efforts in the nation's capital to cut taxes, reform healthcare and scale back regulation.

But thanks in large part to three recent Federal Reserve interest rate increases—one in late 2016 and two more in the first half of 2017—U.S. Bancorp was able to raise rates on loans and drive up net interest income by 3.8% during the quarter. Its net interest margin expanded by 6 basis points.

At the same time, the loans that the bank is making continue to perform well. Executives said credit costs were low relative to historic norms, as they have been for several years alongside the protracted U.S. economic expansion, and nonperforming assets fell. Third-quarter NPAs of $1.25 billion were down from $1.35 billion in the linked quarter and down from $1.66 billion a year earlier.

"It can't last forever, but credit for now is clearly benign," Gary Townsend, a bank investor and GBT Capital Management founder, said in an interview.

Comerica's third-quarter NPAs of $458 million, meanwhile, declined from $519 million in the linked quarter and $660 million a year earlier.

Notably, banks such as U.S. Bancorp and Comerica have benefited on rates in part because they have large and loyal bases of depositors—customers who park their money in banks more because of long-term business ties than to earn interest on deposits. This enables banks to reprice floating-rate loans up faster than they have to on deposits, allowing them to widen the spread between the two, boost interest income and improve margins, analysts say.

"That is an important piece—creating profitability off of the deposit franchises" at a time when loan growth is hard to generate, Vining Sparks analyst Marty Mosby said in an interview.

Another example of this: Fifth Third Bancorp. It reported a small decrease in average loans during the third quarter but higher lending yields.

Fifth Third's asset quality improved, as well. Its NPAs totaled $575 million, down from $670 million in the linked quarter and $798 million a year earlier.

Mosby also noted that, in addition to interest income gains and sustained credit quality, large regional banks as a group continue to create value by buying back their own stock, reducing outstanding share levels and raising the worth of remaining shares.

Along with solid profits, U.S. Bancorp, Comerica and Fifth Third all reported lower share counts for the third quarter.

The Fed's actions "to finally push short-term interest rates meaningfully above zero percent and to finally allow the Large Cap U.S. Banks to begin to rationalize their excess capital and liquidity positions has ignited the last push toward normalization of bank profitability," Mosby wrote.