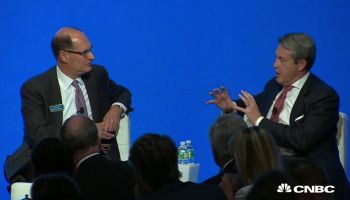 Randal Quarles of the Fed, right, interviewed by The Clearing House's Greg Baer, allows that "governance at the Fed is extremely obscure, even from the inside." (You can view CNBC's video of the entire interview on its Facebook page.)

“Everything is up for a fresh look.”

With those seven words, Federal Reserve Board Gov. Randal Quarles expressed some promise—but no promises—for bankers seeking a change of atmosphere out of Washington. Coupled with the tenor of Acting Comptroller of the Currency Keith Noreika’s time in office, recent comments from Quarles, sworn in less than a month ago, may be cause for optimism for the industry.

But don’t fire your compliance officer just yet.

Time of change at Fed

Quarles was interviewed by Greg Baer, president of The Clearing House, on Nov. 7, during a session at the group’s annual conference. He used the words at the start of this article a couple of times in his answers to Baer’s questions. And he shared many ideas and new attitudes. But he made no guarantees.

“Governance at the Fed is extremely obscure,” said Quarles, “even from the inside.”

Quarles has only been an insider for a couple of weeks, but he’s stepped into a role even more significant than an “ordinary” Fed member. Under the Dodd-Frank Act, the Fed has two vice-chairmen, including the post of vice-chairman for supervision, which Quarles has been appointed to. While former Fed Governor Daniel Tarullo served that role, his nomination to the new title was never confirmed. Prior to Tarullo, it was longstanding practice for a member of the Fed board to oversee supervision and regulation, though there was no formal title and authority under statute.

Quarles, the first person confirmed in that job, told Baer that many specifics of his role are not defined by the law. He sees the job as one of oversight and bringing fresh regulatory proposals to the rest of the Fed board.

“There’s still a significant element of persuasion and making your case,” Quarles said.

However, Quarles said that, “as I’ve come into the job I’ve perceived quite an openness in the deep state of the Fed to taking a fresh look at regulation, which I’ve found very encouraging. … There’s been a reasonable amount of openness to that, even among people who have been there for a long time.”

Quarles also endorsed the idea of regulatory transparency. “And part of transparency is being open to input,” he said.

Only once in a 30-minute session—and he joked about it—did Quarles decline to answer a question on the grounds of being new to his job.

While much of the commentary immediately following the session has focused on specific points, Quarles made an observation that seemed to indicate his own overall priorities.

Baer had asked him if he saw part of his job as returning a “sense of materiality” to the examination process. Baer indicated that many critical aspects of Fed supervision, such as stress testing for large banks, became centered in Washington post-Dodd-Frank. Bankers felt that this led Fed field examiners to begin concentrating on secondary matters but treating them as priorities.

“I’m sure the examiners would say that there is still a sense of materiality in the exam process,” said Quarles, “so I don’t want to completely abandon that.”

However, Quarles made it clear that the supervision process, where the Fed’s examiners meet its banks in the field, may actually be a higher priority for him than regulatory reform.

“I have come into this position thinking that, particularly in the early stages, and perhaps throughout my entire term, engaging on changing the tenor of supervision will be the biggest part of what I do,” Quarles said.

Quarles said that the greater portion of the Fed’s involvement with banks is through supervision, rather than regulation. Effecting change in that sphere, he said, will be very time-consuming.

“That’s dealing with a culture, with thousands of [Fed] people spread across the country,” he explained.

“There’s a lot of work there to be done,” he said, “and I think there are a lot of good things that can be done. It won’t all be entirely to everyone’s satisfaction. But I think it will proceed straightforwardly.”

Quarles is an attorney by training and experience, but he has served in senior posts at the Treasury Department and the International Monetary Fund. After that he was a partner at The Carlyle Group, a private equity firm, and immediately before going to the Fed, head of an investment company.

During a wide-ranging interview with Baer of The Clearing House Quarles was asked about the current state of financial services risk. He noted that in the wake of draconian regulatory shifts like Dodd-Frank, risks can be pushed into other, less-regulated parts of the economy. He said that is something the Fed and other agencies monitor.

Quarles touched on two in this context, the rise of fintech players and the increasing frequency of cybersecurity infiltrations.

• On fintech, he was quite brief: “We ought to be looking at what the implications are of the growth of fintech and how it interacts with the regulated industry.”

• On cybersecurity, Quarles acknowledged that regulators have weighed in.

“It’s been a big focus, but I’m not sure it’s gotten the intellectual attention that it has to have, because of the size of the risk,” said Quarles.

Digging into the details

Baer asked the new governor questions about some specific regulatory efforts. Among these were:

• Tailoring regulation to each institution. This concept has grown beyond the initial thought to differentiate by size. Various proposals have been percolating on Capitol Hill.

“Tailoring is good. I think no one can argue against it being correct, that the character of regulation should be tailored to the character of the firm that is being regulated,” said Quarles. “And that goes from very small firms to the largest firms. As much as that is practicable, we ought to be trying to do that.”

Quarles said that bank size is only one factor, “in determining what the right character of regulation is.”

Looking down the road, he said, “we can see different outcomes from the legislative process. But whether the outcome from the legislative process is a raising of the thresholds, or a factors-based test, or a combination of the two, all of which are possible outcomes, our task as regulators is to take whatever the regulated space is and make sure that we are tailoring the character of our regulation to the character of the particular firms that are left in that space, which will be different depending on how that space is defined.”

Quarles added that he doesn’t intend to wait for Congress to act.

“We will be proceeding right away on that front, in proposing ways to be sure our engagement with each specific firm is appropriate for that specific firm,” he said. “We don’t have to wait for legislation, which is probably fortunate.”

• The next Basel agreement. Baer noted that international regulators working in the Basel framework have been on the verge of releasing the next iteration of its capital standards for some time. He asked if agreement had been reached yet and what was coming.

The new governor acknowledged that for U.S. bankers the issue has long been about having a level playing field with banks of other nations that are part of the Basel process.

“We have statutory limitations as well as our current practice on supervisory models” to consider, said Quarles. “Until we have gone through the process of taking a fresh look at it, I think there is merit in ensuring that there is at least some minimum level of comparability in the approaches internationally.”

• The living will process. This controversial concept has been a tough one for elements of the industry.

Quarles said he felt that the back of that task has been broken, and that it will be more straightforward from now on.

“The idea of going through a process to be sure firms are more resolvable made a lot of sense,” he said. “I do think that that shouldn’t be, and is unlikely to be, of the same level as an anuual process.”

• The stress testing process. While the industry has learned much about this since it began, the devil has usually been in the details.

“I haven’t run into anybody who has a problem with stress testing as a concept,” said Quarles. “We can be much more transparent about the regulatory process in general.”