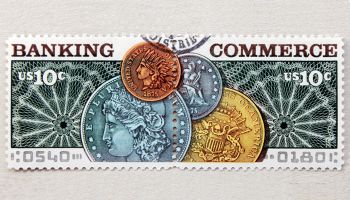 In 1975 the U.S. issued a dual stamp linked, but separated with a middle perforation, portraying banking and commerce. Unlike Acting Comptroller Noreika’s speech renewing the banking/commerce debate, this was no policy statement. The stamps were issued to mark the 100th anniversary of the American Bankers Association.

In a speech to the annual conference of The Clearing House—which is owned by the world’s largest banks—Acting Comptroller Keith Noreika suggested the time was ripe to take a fresh look at the issue of the traditional U.S. separation of banking and commerce.

Not long after the speech the Independent Community Bankers of America expressed strong support for the status quo—actually calling on Congress to close the current loophole that enables commercial firms to enter the banking business by owning industrial loan corporations chartered by some states.

Noreika devoted his entire speech to the subject, which he noted has often been “taboo for banking regulators.” He also portrayed a renewal of dialog about the split as something that could give smaller organizations some aid against larger financial companies, whom he called “the big guys.”

“I recall a meeting where I actually heard gasps when the topic came up for discussion,” said Noreika. Today, he said, “we need fresh research that looks at banking and commerce in a post-Dodd-Frank world.”

Walk through a long history

Noreika explored both the traditional reasons for the separation of banking and commerce, going back to the nation’s beginnings, as well as a deeper look.

His speech text carried nearly two dozen historical footnotes. These cited sources to support his contention that the popular history of the Glass-Steagall Act, which separated commercial and investment banking, and continued the separation of banking and commerce, was not quite the whole story. A key issue was the rivalry between the Rockefeller and Morgan banking interests, for example, something forgotten in the traditional narrative. [Read the Acting Comptroller’s speech]

“The narrative persists to keep commercial interests from owning or having controlling interests in banks, in part, because many view them as ‘public interests’ rather than the ‘private businesses’ they are,” the Acting Comptroller said.

Safer because of separation?

“The recent financial crisis actually demonstrated that there is nothing inherently safer about separating banking and commerce or traditional banking and investment banking,” Noreika said. He noted that there were failures on both sides of the wall during the crisis, in spite of the separation.

“Reinstating Glass-Steagall or continuing to look for ways to separate banking and commerce even more will not make the system any safer because mixing the two did not weaken the system in the first place,” said Noreika.

ICBA stated that prohibitions on banks and commercial firms had helped the U.S. “by limiting systemic risk and restricting commercial access to the federal safety net.”

“Win for the big guys”

Noreika reflected on the long history of exceptions to banking/commerce rules.

“These special exemptions reflect a hard truth about the nature of regulation,” he said. “Well-lawyered and well-connected companies tend to gain and benefit from special exceptions, privileging them over the bulk of firms that must live under the weight of a general prohibition against mixing banking and commerce.”

The result, he said, is this: “advantaging and aggrandizing a few at the expense of the many. In sum, another win for the big guys.”

Why the interest in eroding the walls further?

“Laws that prevent companies with resources and means from becoming competitor banks only serve to protect existing big banks from would-be rivals,” Noreika said. “It has the perverse effect of maintaining the concentration in the big banks that exists today.”

“It could help smaller community banks grow and take advantage of benefits previously only available to grandfathered companies and banks that are big and sophisticated enough to convince the Federal Reserve to grant them an exception,” the regulator said.