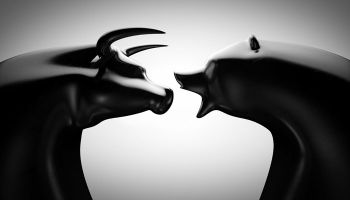 Analysts at Keefe, Bruyette & Woods, Inc., discussed the 2018 outlook for banks in a meeting with reporters.

Many of today’s headlines can seem surreal, but the analysts at Keefe, Bruyette & Woods, Inc., are striking a note of careful optimism for banking in 2018 with an allusion to a famous folk tale by describing today’s conditions as a “Goldilocks Economy.”

This is not a reference to any Wall Street bears, but instead to the ideal temperature of the third bowl of porridge in the folk tale. The economy is not too hot—thus avoiding disruptive volatility and the risk of too much credit driving instability—according to Fred Cannon, executive vice-president and top analyst at KBW. On the other hand, in the firm’s view, the economy is not too cold either. A cooled economy would mean inflation was going away, potentially causing an “inflationary downdraft,” in Cannon’s words, and a flatter yield curve, which does not favor most banks’ business models.

Cannon led a panel of the firm’s analysts meeting with financial reporters this week.

Looking at the yield curve

Speaking broadly, but particularly of banks smaller than the megas, Chris McGratty, managing director at KBW, said that “we have a preference towards banks that are a little different and which operate primarily towards the short end of the yield curve. The yield curve continues to be the main determinant of revenue—70%, roughly, of return is tied to the yield curve. Predicting its steepness is really a challenge. So we’ve tried to isolate one of the variables and focus on the short end of the curve.”

“I’m a ‘permabear’,” said Collyn Gilbert, managing director and analyst of midcap banks in the Northeast. “But that being said, I’m the most optimistic as I’ve been in a while.”

Gilbert said that ROAs were going to be improving, in part due to recent federal tax reform and also because rates on loans and other assets have finally been rising higher. This includes both new assets and seasoned assets that are repricing in a rising-rate environment.

“The profitability profile is finally there for the space,” she said.

In addition, she said there was a “really benign credit outlook. Whatever the next cycle trigger is, it’s not something we’re anticipating.”

In her own region, she said she is a bit concerned about where future loan growth will come from. Northeastern banks have been backing away from commercial real estate credit at the behest of regulators, “right sizing the mix and improving the mix,” she said.

“Northeast banks tend to be risk averse,” she explained. “Where does the next new asset come from?” She said Northeastern players could decide to deploy capital by buying other banks, rather than making more loans. This fits with the firm’s anticipation that 2018 will be a year of consolidation.

Overall, Gilbert said that she is tending to recommend buying two types of institution in her region. One category is banks that have a more diversified asset generation ability. The other is institutions with leading market share in areas that other lenders have overlooked, so that they can exercise some pricing power.

Cannon noted that loan growth has been decent overall for some time, though somewhat weakened in the second half of 2017. He was asked if tax reform could lead to more growth. He said the situation would be mixed. KBW did not revise loan growth assumptions based on tax reform, he noted, in part because it as quite complicated to figure out and depended in part on where one believes the industry stands in the business cycle.

“I think there is a case to be made that small business lending could benefit from the tax bill,” Cannon said. “On the large corporate side, there are all these ins and outs. Some interest isn’t deductible anymore, but you have the acceleration of some depreciation. Also, rates are higher and corporates are extremely liquid, so how much loan growth is out there to be had.”

Cannon pointed out that to date banks have not indicated that they think loan growth will accelerate.

“Most of the banks’ view is that loan growth will be more demand-driven rather than supply-driven, and they are waiting to see what their customers are doing,” said Cannon. He said he expects loan growth to be in line with nominal Gross Domestic Product.

• Tax reform. This is an overall major positive. Some of the short-term impacts on banks, such as on deferred tax assets costing the industry, may be overstated. “Writing down a DTA because the tax rate is going down is not a bad thing,” Cannon said to a reporter who characterized this and other moves as “taking a bath in the fourth quarter.”

Cannon said KBW expects fourth quarter numbers to show what he called a “kitchen sink” effect. In 2018 the corporate tax rate will fall to 21%, versus the 35% rate applying to 2017 earnings. This creates an incentive for banks to take losses, make charitable contribution, issue one-time bonuses, and other steps that take advantage of the timing of the tax change. Putting such expenses off into 2018 would give less benefit, once the tax rate falls.

“It will include any expenses that any company could scramble to put through in the fourth quarter because you get a 35% tax yield versus a 21% tax yield,” said Cannon.

That’s on a past basis, he says. Going forward, for most banks, KBW is estimating that 80% of new tax benefit will go to banks’ bottom lines.

Gilbert reflected that many smaller banks are followers, and that it will be a quarter or two before the influence of tax reform will be seen among many banks’ business models.

“A lot of banks are saying, ‘Let’s wait and see’,” she said. She said many don’t have the skill sets to move into new areas simply because of tax savings.

On the mortgage banking side, some benefit could go to consumers, according to Bose George, managing director in this area. George said mortgage banking is a very fragmented industry, overall, and that some firms would use tax law savings to enable them to charge less and thus acquire market share. He pointed to Quicken Loans, a privately held company, which has used technology to become very efficient, has high returns, and is interested in growing, as one company that might go this way to pick up share.

• Mergers and acquisitions. The analysts expect consolidation to continue in 2018, and potentially to increase in pace, notably among midcap and smallcap banks.

Cannon said the departure of Obama appointee Federal Reserve Gov. Daniel Tarullo and the arrival of Trump appointee Gov. Randal Quarles seemed to have signaled a shift in how the central bank deals with mergers coming before it for approval.

“We’re starting to see that the time to close a deal is down significantly,” said Cannon. McGratty suggested that increased regulatory speed could enable acquiring banks to do multiple deals in a year, which could hasten industry consolidation.

• Deposit building. Outside of the largest banks, which are relatively liquid—often extremely strong on that front—the industry will have to begin working harder than in recent years to raise deposits. McGratty said that loan-to-deposit ratios were rising in many bank size ranges.

Smaller banks will likely have to pay up to differentiate themselves from other banks, especially larger banks, in order to fund incremental growth. Gilbert quipped to reporters that if they wanted a better return on their money, to put deposits in community banks.

Cannon pointed out that few banks have tipped their hands yet on deposit rate strategy in the wake of the tax law’s passage. Only one institution, Customers Bank, had explicitly indicated a change in deposit pricing. On Jan. 5 the Pennsylvania bank said it would raise the rate on its bonus checking account to 2% to pass on some of the coming tax savings to customers. The bank’s announcement points out that it will be paying that rate versus an industry average of 0.06% on similar accounts and an average of 1.5% on money market accounts.

• Regulatory reform. The biggest impact thus far is that there won’t be still more regulations piled onto the volume placed on the industry post-crisis. This means that compliance spending will stabilize, putting something of a ceiling on nonstop growth of this expense category.

While all banks will benefit, KBW sees regulatory reform especially helping the largest banks contain compliance costs. Easing of stress test requirements is also expected to help the large banks. In comments after the session, Gilbert expressed concern about the costs of BSA/AML compliance and cybersecurity among smaller banks.

• Mortgage lending. Purchase money mortgage volume will continue to exceed refinances, as rates rise, and the excitement over rising rates will favor more borrowing for home purchase for the time being. George said the firm expects purchase mortgage volume to rise by 6%-7% in 2018.

• GSE reform. More momentum will gather behind this seemingly perennial quest, post-crisis. Even so, chances of actual reform passing Congress is iffy. Even though some willingness to compromise has emerged on Capitol Hill, George said that House backers will be fighting the calendar as congressional elections approach in 2018.

“I think there’s a small chance that it really happens,” said George.