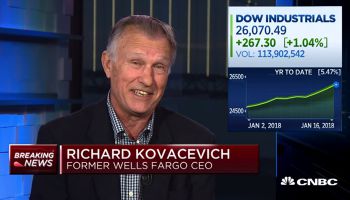 Former Wells Fargo CEO Richard Kovacevich has joined those bankers who think little of Bitcoin as a viable currency. He called it a "pyramid scheme" on an edition of CNBC's "Squawk On The Street" this week.

January has not been a kind month for Bitcoin, and comments from the banking sector show no warmth for the controversial currency.

In fact, “currency” doesn’t fit the usage of some players.

In an interview with CNBC this week, Alfred Kelly, CEO of Visa Inc., expressed skepticism about Bitcoin. He acknowledged that it is still evolving.

Getting out is the operative point there. Visa used to advertise that it could be presented in many places where one couldn’t use American Express. And today, you can’t use Bitcoin in the Visa system.

“I don’t view it as a payment system player,” said Kelly, who formerly worked for Amex, incidentally. “In fact we at Visa won’t process transactions that are cybercurrency based. We’ll only process fiat-based currency transactions.” (Fiat currency is money issued by governments.)

On another CNBC program, former Wells Fargo CEO Richard Kovacevich pulled no punches on how negatively he feels about Bitcoin.

"I think it's a pyramid scheme. It makes no sense. I'm just surprised it isn't even lower,” said Kovacevich, as Bitcoin and Bitcoin futures continued a rough week.

Continuing, Kovacevich said, “I’ve never called it a fraud. Everyone knows what’s going on. You’re betting that somebody’s going to buy it—and some people have been right.” (Last year J.P. Morgan Chase Chairman and CEO Jamie Dimon had called Bitcoin a fraud, but somewhat eased his characterization of it earlier this year.)

However, he added, emphasizing each word, “the fundamentals make no sense.”

Earlier this month, Merrill Lynch, part of Bank of America, announced that its financial advisors are not permitted to place investment clients’ funds in Bitcoin-related investments.