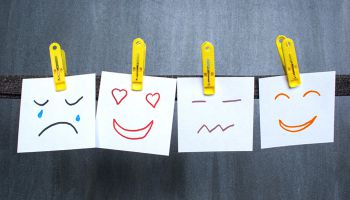 Money has always been an emotional subject, but today many aspects of finance cause consumers significant angst. A recent Cognizant study examines this, as well as potential technological solutions.

Consumers have more than one kind of relationship with their finances, and banks that can learn to distinguish between the various types of emotions people bring to the multiple relationships they have with money will be better able to serve them. Increasingly, better serving them will require designing digital experiences that bring in artificial intelligence with personalized financial services that address the types of financial needs that can cause people the most angst and uncertainty.

This is a key conclusion from a recent report by Cognizant, How Financial Institutions Can Capitalize On The Emotions Of Money.

The report is based on a dual approach to researching people’s relationship with their money. Working with ReD Associates, Cognizant performed in-depth studies of 32 families in the U.S. and Europe. Then, based on those studies, the firms surveyed 3,000 people in the U.S. and the U.K., bolstered by interviews with a range of financial experts.

A starting point for the research is that things are not what they seem on the digital financial front.

“With increased digital capabilities, it’s become easier than ever for consumers to make payments, check balances and access financial data,” the report states. “On that basis, it’s easy to assume that money management has never been simpler.”

However, the report continues, those aspects of handling personal finance only cover a fraction of the relationships most people have to money. Broadly, people see money as “fast” or “slow” money. Fast money includes routine transactions such as bill payments. Slow money, on the other hand, includes pensions and investments, and additional forms of finance that are intended in concept to give consumers assurance.

The researchers found that consumers’ relationship with their money can be divided into eight different facets, each with its own potential sets of emotions. The chart below, based on the study, summarizes this aspect of the research. 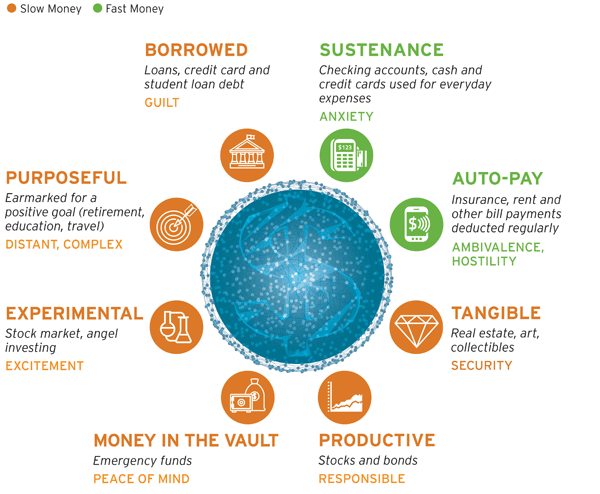 Source: Cognizant study, How Financial Institutions Can Capitalize On The Emotions Of Money

But even while some of the most straightforward elements of finance are highly automated and controllable, consumers feel much distress, and some aspects of finance have many people absolutely flummoxed. Researchers found this was the case across multiple nationalities.

Overall, “people feel as if they are not in control of their money,” the report states. “The individuals we met struggled to manage their spending habits and plan for retirement. The greatest source of stress in their lives was not terrorism, health issues or jobs—it was money. Suffice to say, people’s relationship with money is broken.”

No idea where they stand

Indeed, the study found that “instead of feeling comfort and security in their preparations for the future, people agonize over their slow money. They struggle to translate their personal needs and life goals into financial targets, and they fail to understand whether they are on track to meet those targets once they’ve been set.”

Beyond this feeling of being lost was the widespread belief that, at present, banks frequently aren’t that much help in addressing financial stress. In an interview with Banking Exchange, Cognizant’s Philippe Dintrans says he was amazed that only 20% of respondents feel that their banks understand their financial needs.

However, he also points out that the research found that consumers have a strong desire to obtain such understanding and help from their banks. Dintrans says the research found a theme of trust running between consumers and traditional banking providers. He says this arises because such organizations are seen as playing a fiduciary role, versus newcomers to the financial scene.

Dintrans, senior vice-president and chief digital officer, banking and financial services, explains that “fast” money is about simplicity, while “slow” money is about security. Much progress has been made on making spending and bill paying easier and faster but many aspects of “slow money” haven’t been improved significantly, he says. 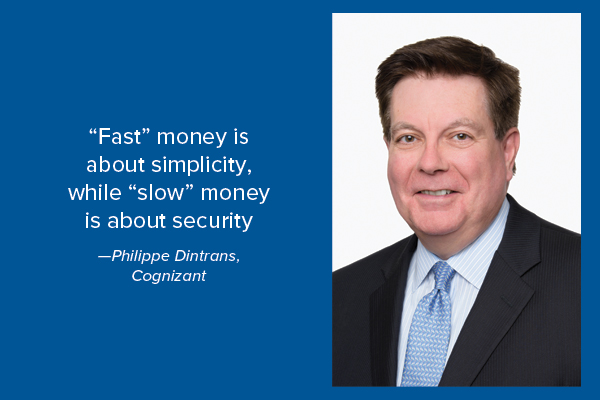 Consumers crave more guidance and advice. While this doesn’t necessarily have to be delivered by a human to a human all the time, according to Dintrans, even a technological approach to “slow” finance needs to account for the needs of the individual financial consumer—a tailored approach.

One remedial point made by the study: As in many other challenges to banking, this one is aggravated by the industry’s traditional siloed thinking.

Banks’ “approach to products and services reflect their org chart,” the study reports, “rather than the customer’s perspective.”

Furthermore, he says, while many matters of personal finance require individualized advice, frequently these matters are not solely about individuals. Family financial matters require taking into account the needs and financial emotions of multiple members of a family, Dintrans explains, so that choices confronting consumers can be multidimensional.

What banks can do

The report’s recommendations for steps banks can take to improve consumers’ state of mind falls into several broad categories:

• Financial education to increase their fluency in the aspects of finance that currently make them uncomfortable.

The report refers to several major banking institutions that post frequent fresh content to their websites on financial subjects, to bring consumers up to speed on important issues.

Increasingly, as the generational preferences for media change, Dintrans adds, more and more content generated for this purpose will need to be designed for mobile devices. Banks need to produce the education in the form allowing it to be most readily consumed. Millennials particularly like videos, for instance.

• Creation of a “digital first” culture will enable banks to serve more people with the tailored guidance and assistance that they crave.

“Artificial intelligence is a key tool in this regard,” the report states. “By combining sentiment analysis with big data, for example, financial institutions can identify trends in banking customers’ individual social networks and among their influencers. AI offers powerful predictive insights that drive top- and bottom-line performance.”

A good illustration of this trend is the movement toward roboadvisory services for investments.

• Product design also grows more important in this regard.

The report discusses several banks’ offerings that address specific facets of financial discomfort. One market segment examined is the needs of students both during college and in the years after.

What Millennial experience means for banks

Interestingly, the shift in the industry’s perspective regarding the Millennial generation plays off some of the report’s findings. At one point, some bankers would dismiss that generation, complaining that they had no money. Of course, with the passage of time, this has been changing, and some bankers now see Millennials as the next major business opportunity for the industry.

Dintrans notes that this gives bankers who adapt their approaches to financial angst a leg up with this generation. Millennials, he explains, tend to rely strongly on word of mouth and recommendations—whether literal or via social media channels—for deciding to whom to bring their problems. Banks that find superior ways to allay the concerns of Millennials will find themselves being recommended to other Millennials, according to Dintrans.

More broadly, Dintrans says, better understanding of people’s needs better informs the digital approaches that banks will increasingly bring to bear on their problems. There is a “democratization” of financial advice going on, bringing the potential for better advice to more people than was once the case.

“It’s through digitalization that democratization is happening,” says Dintrans. It’s all about the power of the ever-present mobile device.