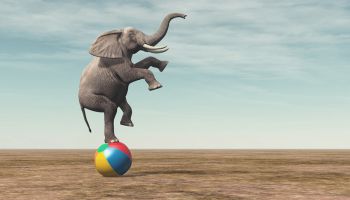 Elephants can dance’ was the book by Lou Gerstner, the CEO who transformed IBM in the 1990s that showed that veteran companies could adapt and prosper. Today, banks are at a similar fork in the road: do they stick to the processes and systems that made them household names or transform?

The big banks have been around for hundreds of years. That longevity is impressive, but often it comes with a slow-moving culture that puts established banks at the opposite end of the spectrum from disruptive start-ups that have nothing to lose.

A business-as-usual mentality isn’t a good idea in a world where new FinTechs can invest hundreds of millions of dollars in investor cash and start with the blank sheet of paper that is a legacy-free IT environment.

The core of modern banking operations is their digital presence and communications networks because fast networks are central to excellent user experiences. But the old thinking about networks was more about uptime than performance and it led to conservatism because breakdowns in network services in use cases like High-Frequency Trading can cost banks millions.

This has led to a situation in which banks today suffer from patchwork systems that have been accreted over years and decades while mergers and acquisitions have led to glued-together systems and data siloes. Generation Y and their successors hardly know of them but COBOL code and the mainframe computer still roam in banks. Nobody wants to take chances with the processes riding on these, no matter how old the underpinnings are becoming.

And this really is a dependency. An estimated $3 trillion ($3 trillion!) in daily commerce flows through these hosts, the antecedents of which date back to the 1950s. Is this risk aversion in practice - or a deathly embrace of risk? It’s debatable. The skills pool of people who know the mainframe and COBOL is, quite literally, dying, and maintaining the status quo is no safe haven.

Lipstick on a pig

Even when banks try to transform, their changes can often be only skin-deep. A recent CEB blog post highlighted the idea of just ‘looking digital’. The COO of a large financial services firm told peers: “A lot of digital is smoke and mirrors. Customers may make a digital submission, but … the same processing behind the scenes is happening as it always has been.”

That’s surely true: many banks today are applying lipstick to the mouths of pigs, slathering on front-facing changes while realizing that the back end, infrastructure and network are no longer fit for purpose. They are saving up problems for later: some industry experts expect a sevenfold increase in the volume of banking data between 2016 and 2020. If banks have so far got away with using ancient systems, they will either pay for this inertia with systemic failures or be stuffed by IT suppliers that have them under their thumbs.

And so, we come to the nub of the matter: banks face a balancing act between modernizing and adopting new technologies that let them protect mission-critical data and processes while enabling new models and workflows.

Cloud computing provides a halfway house: Where once the sector looked upon cloud as anathema, today there is a widespread awareness that for many processes, especially non-critical or heavily differentiated applications, the public cloud represents a perfect fit for bankers.

Refresh infrastructure: This doesn’t have to be an overnight shift but think now about the servers, networks and dependencies that are slowing you down.

Gain some thinking time: Consulting with outside experts can bring a fresh perspective at a time when the stakes in banking are higher than ever.

Ultimately, the answer to our earlier question is critical, and simple: As customer habits change, and digital- and mobile-dependency grow, banks need to be proactive and embrace transformation.