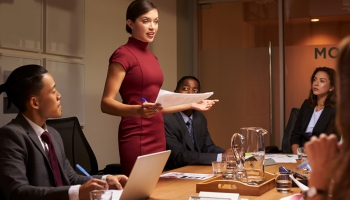 Last week, Goldman Sachs’ Chief Executive Officer stated at Davos that the firm will not bring an American company public that does not have either a woman or some other form of diversity. Other major financial institutions already began striking down would be board members if the board is not already diverse in some way if the new nominee would not change the situation.

State Street is among the firms that vote against directors at companies without a female director, so some of America’s largest banks are in line with the state of California in forcing the issue. Even before the requirements, United States boards were slowly becoming more diverse in terms of gender as about half of the new board members at the country’s largest public companies in 2019 were women.

Goldman Sachs itself has more than one third of its board made up of women. Last week on CNBC, Solomon said, “We realize that this is a small step, but it’s a step in a direction of saying, ‘You know what, we think this is right, we think it’s the right advice and we’re in a position also, because of our network, to help our clients if they need help placing women on boards.”

Not every large banking institution has a set policy like State Street or Goldman Sachs. JP Morgan Chase does not have a written policy. While JP Morgan encourages diversity through a director advisory service, it is not a mandate. The question of how to encourage diversity has always been a difficult one. In the banking industry, many executives state that it is a high priority, but would still contend that one should look for the best candidate regardless of race, gender or sexual orientation.

However, the problem that many advocates for standardizing diversity see is unseen racial or gender bias. Colin Powell was once speaking at an event in Naples, Florida where the entire audience was made up of retired business executives. The event was going well until someone asked why he was for affirmative action. He answered the question with several questions. Powell said, “How many of you ran a corporation at some point during your career?” About one hundred hands went up. He then asked, “How many of you that raised your hand ever helped a friend’s son or daughter get a job at your company or another company?” About eighty hands went up. He asked a final question, “How many of you that raised your hand can tell me that one of the kids you helped was not white?” No hands went up.