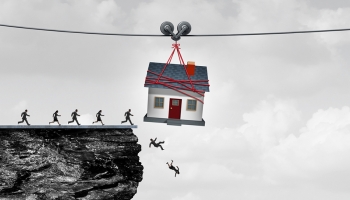 Defective mortgages fell during January according to a leading national index, and has fallen by more than a quarter in the past 12 months.

Data from First American Financial Corporation’s Loan Application Defect Index showed that the frequency of defects, fraud and misrepresentation in mortgage applications fell by 3% in January 2020, and has declined by 28.6% since January 2019.

Mark Fleming, chief economist at First American, said the fall was largely due to the increasing share of lower risk refinance transactions.

Fraud risk fell throughout 2019 as mortgage rates declined from 3.8% to 3.6% and refinancing transactions spiked, according to First American.

“In February, the 30-year, fixed-rate mortgage fell to its lowest level since October 2016. Refinance mortgage applications in February have already spiked in response, with the industry citing a mini ‘refinance boom,’” said Fleming. “If the mortgage market composition continues to shift toward refinance transactions in 2020, the risk of defect, fraud and misrepresentation will continue to decline.”

January’s 30-year fixed-rate mortgage rate was at its lowest level since November 2016, Fleming said, which coincided with refinance applications being 146% above where they were a year earlier.

“This trend has surfaced in previous refinance booms and mini-booms,” Fleming said. “Similarly, fraud risk reached a low point in November 2016 amid the refinance boom between the fourth quarter of 2015 and third quarter of 2016, which pushed the share of refinance originations from 46% to 51%.”

First American’s Defect Index has fallen by 36.3% from the most recent high point of defect risks in October 2013.

No states or core areas monitored by First American recorded an increase in defect frequency over the course of the past 12 months.

West Virginia’s defect rate fell by the most of any state year-on-year, dropping by 47.5%. Indiana, North Carolina, Virginia and Montana’s defect rates all also declined by more than the third.

Other types of fraud, such as check fraud, are on the rise, according to data from the American Bankers Association. Check fraud and debit card fraud cost US banks $2.5 billion in 2018, it reported in January.