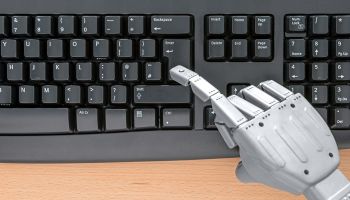 What’s happening to bank tellers? And how will it play out for commercial lending?

In recent weeks I’ve seen articles in various banking publications talking about the decline of branches in processing customers’ transactions and the growth of the “universal teller” as a functional job description. The end of the branch as we know it is something many “disruptors” talk about a lot, and it is true that many banks, especially large ones—but not all—have been trimming them or rethinking their footprint.

Much of this discussion seems retail-banking oriented. I’ve seen nothing about how banks anticipate using branch networks for prospecting for additional commercial lending opportunities as lobby traffic declines.

Thinking about this has had me looking back, both at my own career and at some memories about tellers of an earlier age, including one I knew with a unique second career.

When tellers were recognized for smarts

When I was a teen growing up in Arlington, Mass., I had a Boston Traveler paper route. We paper boys worked for a Traveler distributor who hired us, provided us with the daily papers, and sent us off to deliver them and to collect the monthly bills.

My particular distributor developed a bad back and had to give up his small business. He became a teller for the Harvard Trust Company. I used to see him behind the teller line in his career uniform, a pastel-colored lab coat, performing his teller functions. Virtually all tellers in those days were men and they enjoyed the same level of community and customer esteem as the other platform personnel.

More memorable was another teller. One of my high school classmates’ father was a teller and it was a good job.

But he also moonlighted. He was part of a part-time bookie ring, which valued his talents in handling cash and being quick with figures. I’m sure I was one of the very few—other, perhaps, than the regular plungers who made their bets with the ring—who knew about this fellow’s other job.

I’m not waxing nostalgic. Relating these stories is a way of highlighting the skills that tellers acquire to be successful both then and now and in a variety of environments. I guess we haven’t always appreciated how versatile those skills can be and how important they really are.

Watch out for too-sharp pencils

Twenty years ago regional and community banks with decent-sized branch office footprints put their small-business lenders in branch offices that represented opportunities for frequent communication and interaction with prospects. The big deals went “downtown.” But the local area customers were served by a special sort of branch lender.

At First National in Albuquerque, when I arrived we had about 35 retail branches with four or five representing the great majority of our small business, bankable new deal potential. Our branch lenders were not the “sleek” main office types but rather the branch managers and the assistant managers who knew virtually all people coming into the branch and something about their business and business potential to the bank.

When we were acquired by First Security a couple of years after I arrived, the business model changed.

First Security had just had a consultant’s study that reconfigured the information flow into something that resembles the way most good-sized banks do it today. Information is collected at the branch and shipped to a remote processing center where the credit decision is made and the deal documented in an increasingly automated environment.

For a while, we didn’t detect any change in volume or type of transactions. But change eventually came.

After several months, thanks to promotions, retirements, and transfers, new faces began to occupy offices formerly populated by the people who could match their experience to their markets. The new incumbents in these managerial positions were seasoned bankers, to be sure, but no longer were they necessarily and deliberately experienced in small business lending. This was the First Security model and in due course it was the standard for much of the industry.

I remember reacting like the little Dutch boy with his finger in the dike, trying to find resources to train those new people on the front lines to be aware of decent commercial loan opportunities. My challenges then:

• If you have a person’s financial statement in your hand, how do you scan it in a relatively few seconds to get a glimpse of the lending potential?

• How do you train or at least sensitize people with little or no credit experience to draw out any borrowing potential in a brief conversation?

Without a specific commitment supported by a specific staffing model that considered such experience, it was impossible.

Goodbye to the old model

Nevertheless, the bank and its competitors soldiered on and created a modified “hunters and skinners” model.

The hunters were people I liked to describe as armed with the big brooms that prospected within geographic territories corresponding to branch trade areas or groups of branch trade areas. They moved the prospects to the nearest branch that seemed convenient and turned them over to the “assembly line.”

The skinners then underwrote the credit (untouched by human hands, so to speak). Ongoing servicing of the accounts was left largely to the branch staff, but many of these people had little or no small business credit experience.

Naturally, to the sharp-penciled folks at headquarters, this represented a so-called triumph of reason and efficiency over old-fashioned ways. Too bad that it didn’t work very well—certainly not like the model it replaced.

Some of our “sweepers” were very good at their jobs but the old timers, those with 20 or more years of small commercial lending experience, realized we’d lost our edge in spotting bankable deals.

Rise of the universal teller

Tellers who are literally the front line of most all customer-initiated contact became the filters for everything. They were great at running paying and receiving windows and in fact at First Security we prided ourselves on having the fastest tellers in town. But that’s all they had been trained to do, and something valuable was lost in the staffing model.

In recent times, judging by the articles and attention to the declining branch transaction levels, we’re migrating to a universal teller option. This is sensible as a response as it’s a sort of private banking approach and provides much better interface opportunities in what is often and prospectively a less-pressured transactional environment.

I think we fail to recognize the importance of “first point of contact” jobs like these and the real value to the institution of the people who fill them. It’s not necessarily our fault. It’s the model we’ve migrated into where the human skill set that’s perhaps the most useful now, many years later, almost totally unavailable at the contact point with the customer.

We may be more efficient by some measures but we seem to have lost ground to non-banking alternatives. I wonder if there’s a connection.

Can we restore the human touch to our businesses?

Or have we simply lost the capacity to even understand it?

More in this category: « Learning to connect the dots Target’s other breach and banker diligence »
back to top