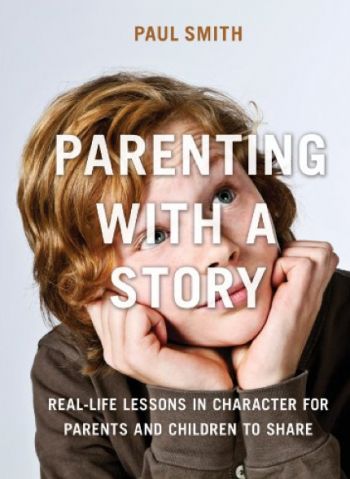 Parenting with a Story: Real-Life Lessons In Character For Parents And Children To Share. By Paul Smith. AMACOM. 260 pp.

In the same way that a picture is worth a thousand words, a good story has more impact than a thousand direct instructions.

But even though we have all experienced the power of stories and their lasting effect on our behavior, we often forget to make use of them ourselves when we need to give advice or teach a lesson.

Paul Smith’s first storytelling book was published—and reviewed on this website—a few years ago. Lead With A Story: A Guide to Crafting Business Narratives That Captivate, Convince, And Inspire gave practical advice about how anyone can use stories in the workplace to motivate, convince, and inspire.

Smith recently published this second book along the same lines, but with a different focus. Parenting with a Story is intended for parents to use during teachable moments with their kids. Much like its predecessor, it includes more than 100 stories to be used in a variety of situations.

As you might suspect, the stories carry meaning beyond the parenting role.

The book’s stories are organized into 23 topics contained within two main sections. Part one focuses on “Who you are” with chapters on subjects like ambition, curiosity, integrity, and self-reliance. Part two centers on “How you treat other people” and contains lessons about kindness, fairness, friendship, and gratitude, to name a few such traits.

As in his previous book, Smith also includes a story matrix that enables readers to locate relevant stories quickly by subject matter. The chart even contains a “what not to say” column to demonstrate which stories will replace the straightforward, often clichéd advice you may be tempted to give, like “Take pride in your work” or “Learn to be happy with less.”

Smith travelled far and wide to collect research for this latest addition to the subject of storytelling. Over the course of a year, he gathered more than 800 stories from individuals in 19 countries and 18 U.S. states—people from all walks of life. The stories that he chose to highlight were told by people of many different professions, ethnic groups, religious beliefs, and socioeconomic backgrounds. Despite the diversity of their origins, though, each story presented crosses these boundaries to apply universally.

The story of “Jenny”

My favorite story is about how the father of a Utah high school’s star basketball player taught his son the value of humility, kindness, and standing up to cruelty. He did so by making him face the girl he and that the rest of the team had made fun of.

The father had overheard his son and his friends making fun of “Jenny,” who had a number of disabilities that confined her to a wheelchair and caused her to need a computer to communicate. The father surprised his son and the team by forcing them to speak to Jenny one day at lunch. During their brief conversation in the crowded school cafeteria, the students learned that Jenny had always been in her wheelchair, she did not know her father, and that her mother was her best friend. She also told them that her favorite thing to do was watch the basketball cheerleaders.

The team was appropriately humbled after meeting Jenny. Word of the conversation spread throughout the school and over the next week Jenny became very popular. She was even voted captain of the cheerleading squad and got to pick which cheers were performed at the games.

The power of this story is threefold.

First, it demonstrates that as parents or mentors we should not let teaching opportunities like this go by without making use of them. The captain’s father overheard his son making fun of Jenny, and he chose to take action rather than chalking it up to “boys being boys.”

Second, the father taught his son through a firsthand experience, which will always have a greater impact than a simple verbal reprimand.

Finally, we can all learn from and share this story as a powerful lesson in how to treat others with respect and the effects of positive peer pressure.

“Parenting” in the workplace

Parenting With A Story might have been written with parent-child interactions in mind, but the themes relate to other types of relationships, too. Particularly for the workplace environment, most of the subject matter could apply in mentoring relationships you may have with coworkers and employees that you supervise. The stories can very easily be tailored to supply career-oriented and general character-development lessons.

For instance, some of the stories provided in the chapters about a positive mental attitude, self-discipline, respect for others, and social intelligence could help supervisors soften the blow during a negative performance review. Employees will be more likely to see their boss’s point of view—and the value of changing their behavior—if an approach like storytelling is used to illustrate the problem.

As in his previous treatment of the subject, Smith does not take it as granted that his readers already appreciate the value of storytelling. He takes care throughout to convince the reader of the utility and necessity of using stories to educate. And Smith certainly proves his point.

For those who aren’t natural storytellers…

But even after the reader is convinced and Smith has provided dozens of stories to choose from, he addresses further barriers to entry in a special final chapter. Here he answers the most common objections that readers have to utilizing storytelling to their advantage, including “I don’t have any good stories to tell”; “I’m not sure when to tell these stories”; and “I don’t know how to tell stories very well.”

Smith experienced such objections during his interview process. He found it difficult to obtain stories by asking for them specifically. Many people tend to think that they don’t have any helpful stories to share. Rather than asking how his interview subjects would give advice on a certain topic, Smith learned to take a different tack. He would ask them to tell him about a time that they learned an important lesson or what stories they were told that they have always remembered.

If we also think this way, we realize that we all have many stories to tell.

I specifically recall cautionary tales from my mother—mostly about the hazards of being a young woman alone in a city—that were much more effective than if she had simply told me, “Always double check that your car doors are locked.”

I also learned about the importance of ethics and being a Good Samaritan from hearing about the time my dad found a diamond engagement ring in a parking lot and, by posting a classified ad in the newspaper, managed to find its frantic owner.

We intrinsically place a higher value on what people do rather than what they say, so when we are told about things that actually happened we tend to take those lessons to heart.

Smith’s extra attention to common pitfalls, along with the depth and breadth of his coverage of the subject matter, is what keeps his work relevant, practical, and enduring. His care in research and writing is clear, and he has now produced thoughtful additions to two crowded—and wildly different—genres.

But the leadership and character development stories presented in both of Smith’s storytelling works transcend their respective categories and are applicable to everyone.

Even if you don’t agree that there is a connection between Parenting with a Story and the banking industry, the book serves as a worthwhile break from the business books we usually address here.

As Smith says in his introduction, this is a book to use, not just to read.

More in this category: « ATMs from “A” to today What you didn’t know about networking »
back to top