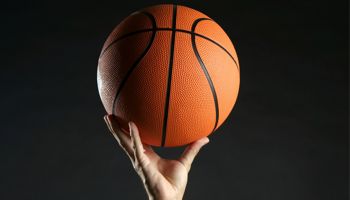 An improved financial climate and an uptick in M&A activity were the biggest factors that boosted CEO compensation from 2012 to 2014 in the U.S. banking industry.

Who got the greater green

In order to see where in the sector CEO compensation grew the fastest, SNL looked at banks' CEOs and principal executive executives, who consistently held the top job at their institution's fiscal year-end from 2012 to 2014. The analysis covers U.S.-based companies classified by SNL as banks and thrifts that publicly filed proxy statements during the time frame, and compares CEO compensation levels in 2014 with 2012.

How leaders did by bank size range 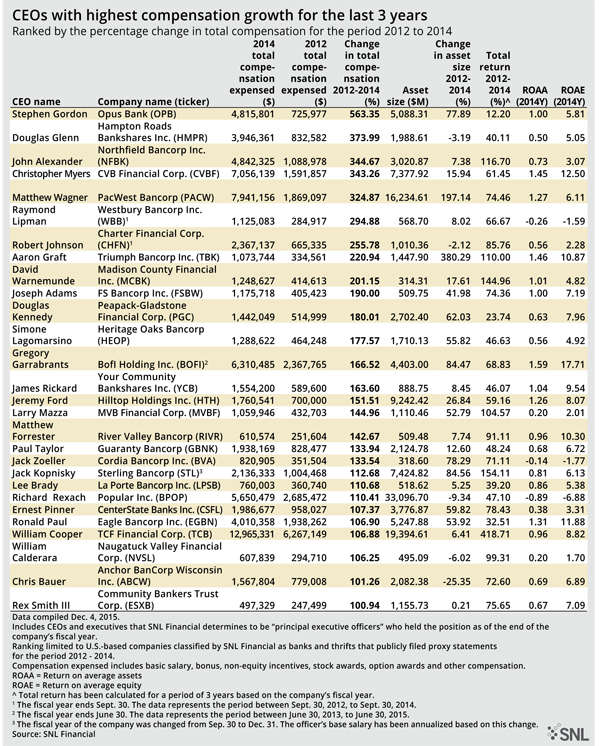 Because of mandates or performance, banks had most probably suspended performance-based award programs during the year, she told SNL.

But as banks started returning to profitability with the recovering economy, compensation started to show targeted or increased payouts in their performance-based programs—which, once reinstated, even more than doubled the bottom line for some occupants of the corner office. Hay described 2012 as something of a turning point for compensation in the sector.

Todd Leone, a partner at McLagan, an Aon Hewitt company that consults financial institutions on performance, noted that smaller banks recovered more gradually from the recession. Leone said that banks with $10 billion to $25 billion in assets dropped "hard and fast" in 2009, but recovered quickly.

SNL data shows a slight increase in the number of banks that granted stock and option awards from 2012 to 2014, while total equity-based compensation grew approximately 21% over the time period.

Of the 582 banks in 2012, a total of 304 banks granted equity-based compensation to CEOs, including 115 banks with assets between $1 billion to $5 billion. In comparison, a total of 333 banks out of 570 banks in 2014, including 126 banks with $1 billion to $5 billion in assets, awarded performance-based compensation to its CEOs.

Hay commented that base salaries showed moderate growth over the time period, so if banks compensated their CEOs at higher levels in 2014, it was mainly through short- and long-term compensation.

PacWest's Wagner received approximately $5.7 million in stock awards and saw a raise of almost 65% in his non-equity based incentive plan compensation in 2014, whereas the executive did not receive any equity-based compensation in 2012.

Similarly, Opus Bank awarded Gordon approximately $3.5 million in stocks and options in 2014, contributing to an increase of approximately 563% in his overall compensation, while he did not receive any equity-based compensation in 2012.

While commenting on the relationship of banks' asset sizes with compensation, Hay told SNL that they are “positively correlated." She also noted that banks that grow through M&A can see fairly significant changes in executive's compensation.

Opus Bank's Gordon saw the most gain—of approximately 563%—in his compensation from 2012 to 2014, as the company grew its total assets by 78% over the period with the acquisition of four branches from Salt Lake City-based Zions Bancorp. on Aug. 16, 2013, and 10 branches from PacWest on Sept. 21, 2012. According to the company's performance criteria, the covered executives' performance is based on return on average assets, return on average equity, return on average tangible equity, general and administrative expenses over average assets, and/or regulatory rating, among other factors.

Elsewhere, PacWest increased its total assets by approximately 197% from 2012 to 2014, by completing multiple successful deals, including the acquisition of Los Angeles-based CapitalSource Inc. for approximately $2.4 billion, while trimming its branch network through the sale of 10 branches to Opus. The company also recently closed its acquisition of Durham, N.C.-based Square 1 Financial Inc. in October. Wagner, president and CEO of PacWest, saw an increase of approximately 325% in his total compensation from 2012 to 2014. Based on the company's performance criteria, the company exceeded its targeted core deposits by $244.6 billion, and met its targeted loans and leases amount of $11.91 billion in 2014.

In addition, at Sterling, Kopnisky's total compensation grew 112.68% from 2012 to 2014, as the company generated a total return of 154.11% and grew its assets by 84.56% over the same time frame. Formerly known as Provident New York Bancorp, the company completed three successful bank deals from 2012 to 2014, including a merger with Sterling Bancorp in 2013 and the acquisition of Hudson Valley Holding Corp. in June, which was announced in November 2014. Kopnisky received $900,010 in stock awards along with $500,000 in non-equity-based incentive plan compensation in 2014. In 2012, the executive received $412,500 in non-equity-based incentive plan compensation.

Regulatory factors also played a vital part in affecting the CEOs' compensation from 2012 to 2014, along with economic conditions, M&A activity and performance-based awards. Interest rates directly affected defined benefit plans. The interest rate environment did not only impact the bank's profit and loss accounts, but also the CEO compensation, Leone told SNL.

Under the clawback rule, the SEC proposed that erroneously awarded incentive-based compensation would be recovered from current and former executives at listed companies. The rule further explains that the recovered amount in a clawback will be equal to the amount received in excess of what should have been paid after the accounting restatement of a company's financials.

Along the same lines, under the pay-for-performance proposal, reporting companies would have to disclose total shareholder returns on an annual basis going back five years, as well as five years of total shareholder returns for their peer group. The proposal would also require companies to disclose executive compensation "actually paid" to the principal executive officer and the average actually paid to other named executive officers.

Increased regulatory activity will play a vital role in determining the future compensation levels for banks' CEOs. "The regulatory aspects of Dodd-Frank will be going online relatively soon. It's something that everybody needs to ensure that they are looking out for," said Leone.

This article originally appeared on SNL Financial’s website under the title, “With improving economy, CEO pay rebounds from 'last bad year' of 2012.”